Why the royal baby's name Louis is obvious and nostalgic

LONDON -- And so His Royal Highness Prince Louis of Cambridge it is.

A fine and healthy royal boy brought into this world at 8 pounds, 7 ounces, fifth in line to the British crown. Brother to George and Charlotte. Nephew to Harry and Auntie-Meghan-to-be. Grandson of Charles. Great-grandson of Elizabeth and Philip.

Kensington Palace did not offer an explanation but the choice is obvious and nostalgic. Lord Louis Mountbatten was Prince Charles’s beloved great-uncle.

He was Admiral of the Fleet, last Viceroy of India, only to be assassinated by the IRA in 1979 with a bomb placed on his fishing boat. 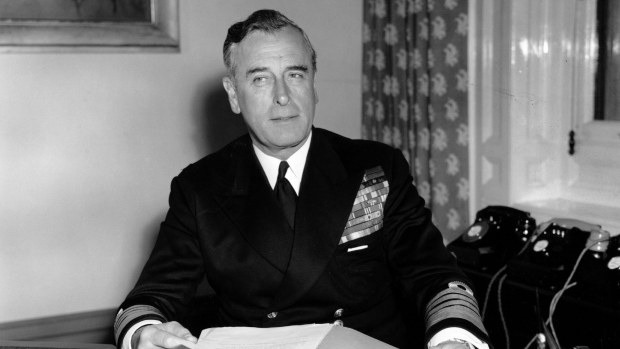 In this April 22, 1955 file photo, British Admiral Earl Louis Mountbatten sits at his desk in full uniform for the first time at the Admirality in London. (AP Photo)

A number of other royal sons have also been called Louis, but only as a third or fourth name. Prince William is William Arthur Philip Louis. Prince George is George Alexander Louis. But this new Louis is out front.

The bookies never saw it coming. Louis was given odds of 20-1. A few lucky punters cashed in. Blackpool Zoo immediately announced Louis would be the name of a newborn double-humped Bactrian camel also born on Monday morning. The London Eye announced free rides on Monday for anyone named Louis.

Silly, but this is still the United KINGDOM and a son is born.

But consider for a moment a different theory behind the name Louis.

It is very French. Lou-ee, not the American Lou-is. It’s also European. And this is where the conspiracy crazies in.

What if the new generation of royals, William and Harry—aided by Kate and Meghan to become the Fab Four—are secretly opposed to Brexit, and this is their covert protest to the British government?

The first prince born since the vote to leave Europe is really a special agent of the Remain movement. Brilliant. The tabloids will be all over it.

Think about it. No doubt the Russians are.