Lisa LaFlamme on her revealing conversation with Prince Harry

LONDON -- After three decades as a journalist, I can tell you it’s special when someone invites you into their home to do an on-camera interview. People relax. Their stories are better. More real.

When I walked into Kensington Palace in London, home for generations of British kings and queens, I swear I could hear the echoes of two little princes shrieking with joy and running hell-for-leather down those long corridors in boy-heaven. If those little brothers had looked up, they’d have seen giant portraits of their ancestors frowning down in disapproval. Their mother, on the other hand, would have probably urged them on.

Kensington Palace was the home of Diana.

This is where William and Harry lived with her.

This is where they mourned her death, 20 years ago.

Kensington Palace is where Diana would cut short a royal appointment and whip out to pick up her boys from school, six minutes down the road, and bring them home for tea.

Home is where Diana’s coffin rested the night before the funeral the world watched.

Home is where I sat down with Prince Harry, now 32, to chat with the man who has recently revealed his struggle dealing with his mom’s death.

It is his battle to overcome that emotional devastation, his desire to honour her memory, and his devotion to wounded soldiers that brought the CTV National News crew to Harry’s home, to sit down with him and chat on his sofa.

We were there for Harry to talk about himself, yes, but also for him to talk about others who are dealing with injuries, both mental and physical.

As is always the case with a travelling TV show, we had to scope out the palace to find the best place for those important production elements: great lighting and great sound.

The bright, beautiful breakfast room with its solid wood-framed windows overlooking the wisteria and rose bushes?

Sorry, no. I loved this room but the wide pine floors were so creaky it was crossed off the list as an “audio nightmare.”

Next up…. the dining room. Cavernous and grand with a world of history on the walls.

Sorry, no. Too impersonal and big.

We went from room to room, up and down the old wooden staircase and then… settled on the smallest space: a cozy living room that doubled as an office during Diana’s life. It’s cluttered in a comfortable way. A small, leather-topped desk in the corner, a big open fireplace with a mountain of wood, couches, old chairs, family photos and piles of books on the ottoman. The title that caught my eye was the same one the Prince’s communications director promptly put away -- a picture book about Harry Potter. To his friends, “Potter” is the Prince’s nickname but apparently not something Palace PR would want to distract from our interview. 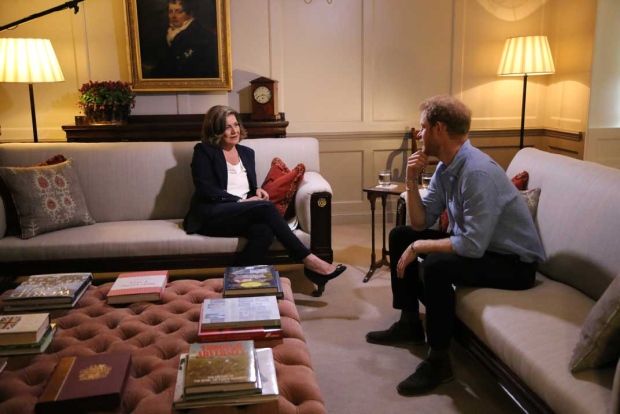 So yes! Seemed like good karma for an open conversation.

By the time Harry arrived in the room, it was completely transformed into a perfectly lit environment with four cameras at optimum angles. Even he was impressed by our director of photography, the fabulously talented Stephane Brisson -- Harry walked in and said, “Wow, this room looks amazing.”

I replied, “Wait until you’re in the shot and it will be TV gold.”

The conversation with Prince Harry was as comfortable as sitting across from one of my nephews, and the same logic applied -- ask very few questions and you get way more information than you bargained for.

Harry is happy to talk about the things that move him, the people that inspire him, and the issues, he says, that don’t get enough attention.

I landed on the doorstep of Kensington Palace to talk about the Invictus Games -- the brainchild of Prince Harry. It’s his outreach to our military, to the men and women who’ve served their countries only to come back forever changed -- physically or mentally. It’s a subject that, after covering wars in Iraq, Afghanistan and other conflict zones, has always meant a great deal to me personally. Now, to see these wounded soldiers find strength and purpose in competitive sport, is a beautiful and powerful thing. The fact that Toronto is hosting this year’s games should be a source of pride for all of us. Being in the stands, cheering on the athletes is a way of confirming our respect for their sacrifice.

Prince Harry wears his heart on his sleeve. During our conversation I was drawn in immediately by the passion he exudes for the soldiers he once fought beside. His wounds, though, go back much further than his 10 years in the British army.

I was urged by the Palace PR not to ask about his mother but it was inevitable that this most sensitive subject emerge from Harry himself. He is all about authenticity now and facing up to things in life we don’t ask for but are forced to “manage” -- like a war amputation or the loss of a mother as a 12-year-old boy. To Harry, these wounds trigger the same emotional eventuality. Ignore the demons and they will haunt you forever. Reveal them and find strength in the support of those around you.

Family support is one of the main themes of this year’s Invictus Games and we felt it first-hand during our visit to Kensington Palace. At one point we entered what staff called “the mud room,” the spacious entrance hall that opened onto an inner courtyard, and passed through the door Diana and the boys used on a daily basis. 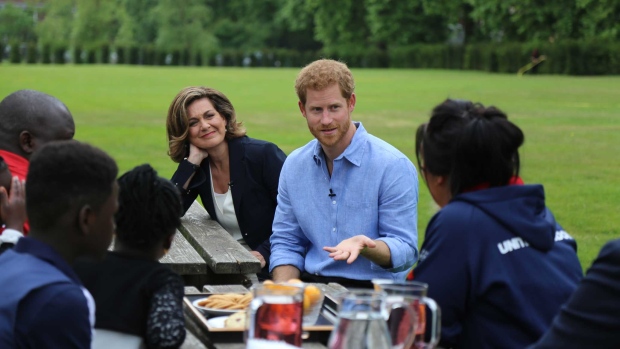 We headed onto the grounds for the second part of our interview -- a couple of picnic tables and a free-wheeling conversation with two wounded soldiers and their families. One soldier is a triple amputee with five children. Yes, five children. Prince Harry immediately focused on the kids and even sat right down on the grass so he could look them in the eye. He made them feel special and at home in the place where he is most comfortable.

We talked about Toronto, a city he now knows well as a regular visitor to see his girlfriend -- and no, I didn’t ask about his romantic relationship or whether he’s about to pop the question. As curious as I am, I decided his love life couldn’t eclipse the importance of Invictus. He did have a lot to say, though, about Canada and vivid childhood memories about his first interaction with Canadians.

This hour-long CTV News special is about a lot of things but primarily it’s about mental health -- something that impacts almost every family. The rest of us don’t have the weight of Diana’s legacy or the responsibility that comes with a privileged life. We haven’t lost limbs or suffered PTSD as a result of war. But I think this conversation with Prince Harry offers a few valuable insights -- the importance of admitting, out loud, when something’s wrong and the strength to allow others in, to help.

It’s also about pure competition. These athletes, once disfigured or despondent, fall back on the same qualities they used as professional soldiers -- discipline, determination and patriotism.

The soldiers from 17 countries will compete at the Invictus Games in Toronto this September and Prince Harry will be at the finish line urging them to cross, just as his mother urged him as a 12-year-old boy.