Tiananmen Square's Tank Man at 25: The story behind the iconic image 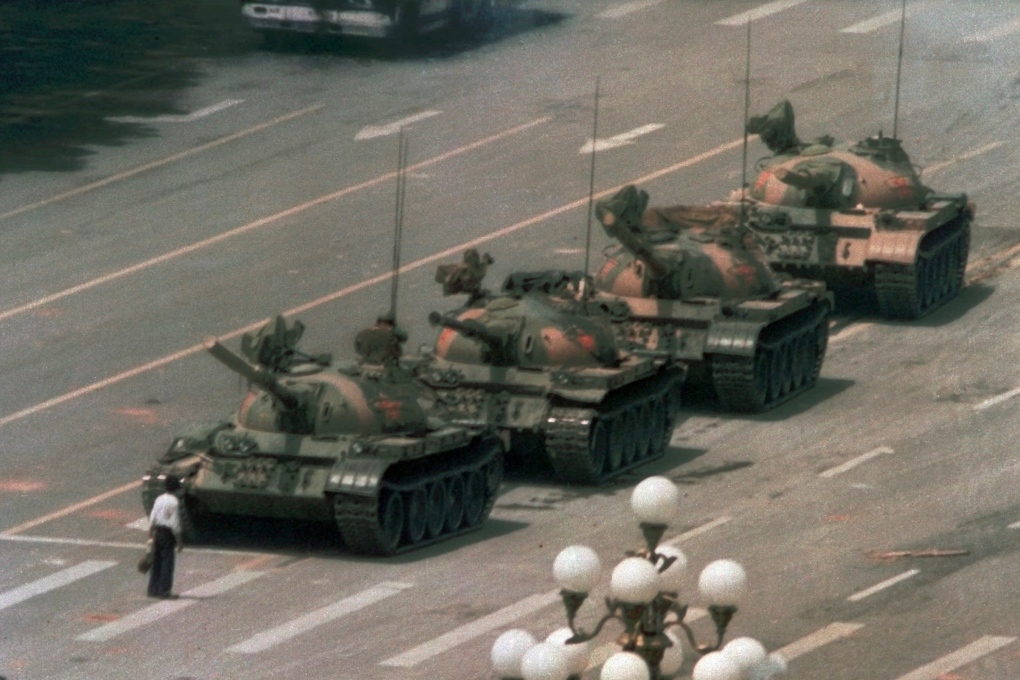 In this June 5, 1989 file photo, a man stands alone to block a line of tanks heading east on Beijing's Changan Boulevard from Tiananmen Square in Beijing. (AP Photo/Jeff Widener, File)

It was the most important assignment of Jeff Widener’s life and the odds felt stacked against him. He had a lingering flu and a throbbing concussion from being hit in the face with a rock. Worse, a massacre was unfolding in the streets of Beijing and he was a photographer who had run out of film.

“I was able to get one roll of 100 ASA from a tourist,” Widener told me in an interview, “I still get shivers when I realize how close I was to losing it.”

The “it” Widener is referring to is one of the most iconic images of the century, of a lone protester staring down a column of Chinese army tanks near Tiananmen Square. The “Tank Man” photo epitomized the defiance of nationwide protests that restless spring and the brutality wielded by the Communist Party to crush them. That Widener even made the photo was, by his own claim, “a miracle.”

The student-led protests demanded a loosening of Communist Party power and as they gained momentum, Widener was dispatched by the Associated Press to cover them. For the most part the atmosphere at Tiananmen Square had been orderly and hopeful with protestors singing and waving banners. Street sweepers cleaned around them and near the edge of the square people queued for food.

But as the crowds swelled Widener sensed a shift in mood. Anger was building and so was the army’s presence. By June 3rd Widener turned to a friend and said, “I’ve got a bad feeling about tonight.”

Hundreds were killed. Maybe thousands. A quarter century later there is still no official account of the blood spilled. To this day China’s government still believes the crackdown was justified to maintain stability.

The bloodshed and burning continued through June 4th, an anniversary China’s government has gone to great effort to erase. Any mention has been scrubbed from the internet and ‘the events’ do not appear in textbooks. Generations of Chinese have never seen the Tank Man photo because it is effectively banned.

Widener made the photo the morning of June 5th. He rode a bicycle to the Beijing Hotel because it offered the best view of the army crackdown in the streets below. With film and cameras stuffed in his clothes, Widener was able to slip past security with the help of a young American tourist in the lobby who pretended he was a friend.

From the balcony Widener photographed bodies being ferried on carts and tanks pushing burned-out buses, and between rolls of film he took naps to nurse his pounding headache. Then, he heard the familiar rumble of tanks on Chang’An Avenue so he went to his camera that was loaded with that one roll of tourist film. He peered through the lens.

“I lined up the photo I wanted with the tanks because it was an impressive column,” he said, “Then this guy in a white shirt walks out with a shopping bag and I think he’s screwing up my composition!”

Widener expected the man to be shot but he just stood there challenging the tanks. The man waved his arms, taunted the tanks and eventually climbed on top of one of them.

“But the picture was too far away,” he said. To improve it required a gamble: Should he duck into the room to grab the converter to double his image? It was a risk. If the man left the street he would lose the image.

Widener dashed for the converter. He put it on his camera and shot three frames before realizing his camera settings were wrong.

“Any photographer knows shooting 800mm at a 30th of a second just doesn’t work,” he said.

So Widener did not figure he had the shot when he gave all of his film to Kirk Martsen, the young American who helped him get into the hotel. Martsen stuffed the rolls into his underwear to get past the soldiers and delivered them to the US Embassy. Somebody there ensured the film made it to the AP office and the rest is history.

“I’m so happy that I didn’t screw it up,” chuckled Widener, who recently staged an exhibition in Hong Kong that included Tank Man and other images from Tiananmen Square. Several had never been published before from negatives that he had restored.

“It had a profound effect on people,” Widener said of Tank Man as a universal symbol of struggle, “Some relate to it almost in a religious way.”

But even now, 25 years later, the identity of Tank Man remains a mystery. No relatives or friends have come forward to attach a name or reason for him to stand in the street the way he did that day. Was he a protester? A concerned citizen? A grieving relative?

PBS did an entire documentary exploring all of the possibilities of Tank Man’s fate, whether he was arrested or killed or forced into exile. One of the stronger theories is that he simply left the street that day and quietly assumed his life somewhere in China.

“It’s amazing after a quarter century that nobody knows,” said Widener, “We will never be 100 per cent sure.”

Jeff Widener returned to Beijing 20 years after the crackdown for the filming of a documentary to mark the anniversary. He stayed at the same hotel that had the same aging bamboo furniture and took a stroll along Chang’An toward the square.

At one point on the sidewalk Widener met a woman named Corinna, a teacher visiting China from Germany. They struck up a conversation and that led to lunch. The following year they were married and now live in Hamburg.

“If someone told me at the time (of the crackdown) that I would meet my wife there I would have thought they were nuts,” said Widener, “So Tank Man did me a favour.” 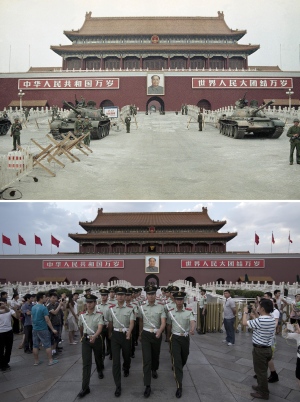 Tiananmen Square before and after the crackdown

Do you have a news story that Canadians need to know about? Is there a story that needs to be told? Tell us now!