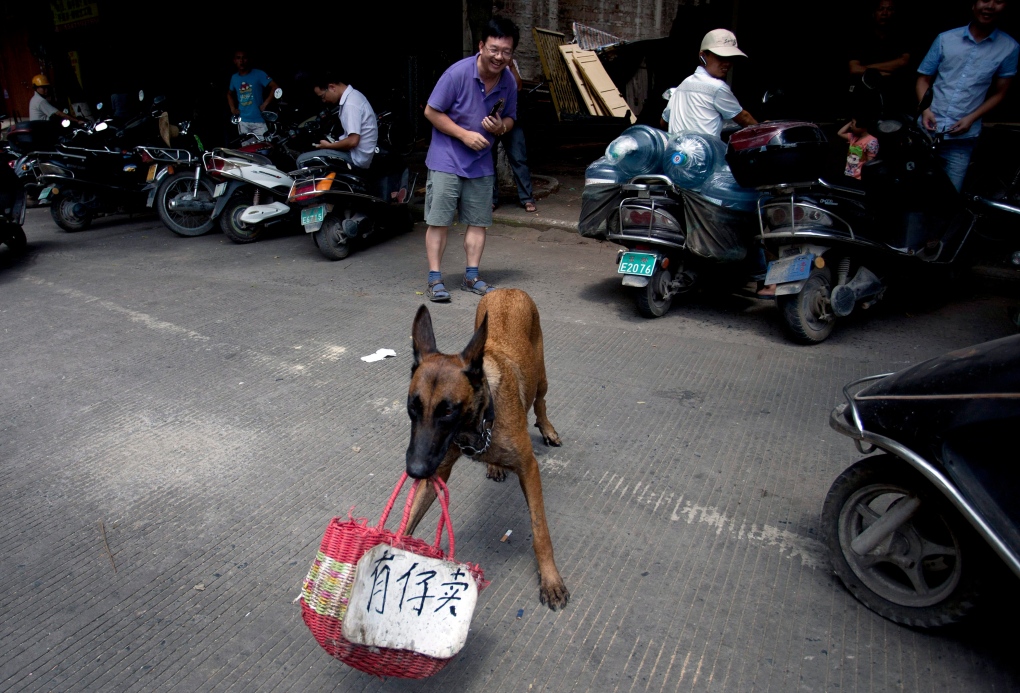 In this Sunday, June 21, 2015 photo, a dog carries a basket with a paper that reads "curd for sale" at a market during a dog meat festival in Yulin in south China's Guangxi Zhuang Autonomous Region. Restaurateurs in a southern Chinese town are holding an annual dog meat festival despite international criticism. (Chinatopix via AP)

Summer is a time of festivals and feasts across China but few are as controversial as a seasonal gathering just held in YuLin, in southwest Guangxi province.

For a few days every year to mark the summer solstice, people descend on the village to eat lychees and dog meat.

An estimated 10,000 dogs were killed to appease appetites at the festival and live animal markets in YuLin were busy with preparations in the days before.

“Eating dog meat is a local tradition,” a receptionist at the Longmen Dog Meat Restaurant told The Associated Press.

International outrage was loud this year with celebrities like Ricky Gervais and Gisele Bundchen taking to social media to appeal for the festival and meat markets to be banned. The hashtags #StopYuLin2015 and #itsnofestival registered more than 1 million instances on Twitter.

Whether you're an atheist or believer, vegan or hunter, you must agree that torturing a dog then skinning it alive is wrong. #StopYuLin2015

Criticism against the annual festival is growing within China too. Chinese celebrities including actor Fan Bingbing posted an online video condemning the cruelty of the festival. Actor Yang Mi and pop star Chen Kun also generated discussion on Weibo, the microblogging site, and online petitions have garnered nearly 4 million signatures.

Animal rights activists traveled to YuLin and briefly unfurled banners before they were whisked away by plainclothes security officers. 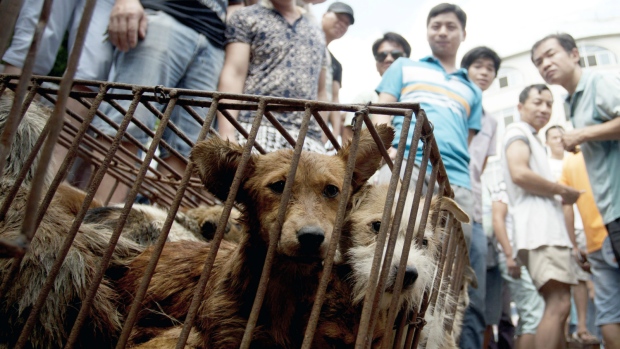 China is not a place where public activism is allowed to flourish and the current leadership has cracked down on civil disobedience. The negative attention aimed at this particular festival is also embarrassing for the government.

It makes the story of 65-year old Yang Xiaoyun, a retired school teacher, worth noting. Ms. Yang traveled more than 2,000 kilometers from her home in Tianjin in the north to YuLin to save as many dogs as she could. She made the journey last year too and managed to rescue 360 dogs and several cats.

“Last time I had no experience,” she told The Beijing News, “so this year I’ll pay by weight.”

Vendors knew Ms. Yang was coming (several had called her about their inventories) and apparently negotiated prices. With the 7,000 yuan (C$1,200) she had saved and raised she was able to buy 100 dogs.

Ms. Yang is a longtime animal activist who has been rescuing pets since 1995. She operates a sanctuary called, “Common Home for All”, and hopes to open other shelters including one near YuLin. 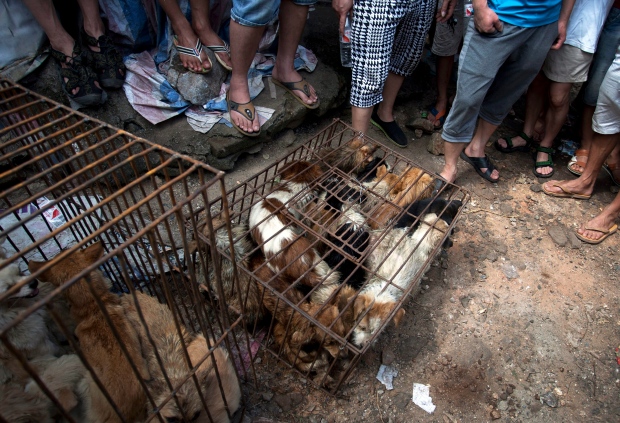 Dog meat is eaten in some parts of China and other countries in Asia but it is not a widely popular dish.

The tradition of eating dog meat dates back hundreds of years and is thought to help the body ward off summer heat. But the YuLin festival is relatively new, so critics here contend there is no cultural value and it is simply a marketing scheme by business owners to make money.

The local government claimed no ties to it, posting an online message saying, “The ‘summer solstice lychee and dog meat festival' is a commercial term, the city has never [officially] organised a 'dog meat festival.’"

Keeping dogs as pets was discouraged under early Communist Party rule but it is increasingly popular with the growth of China’s burgeoning middle class.

That, in its own way, is helping fuel a growing animal rights movement here.