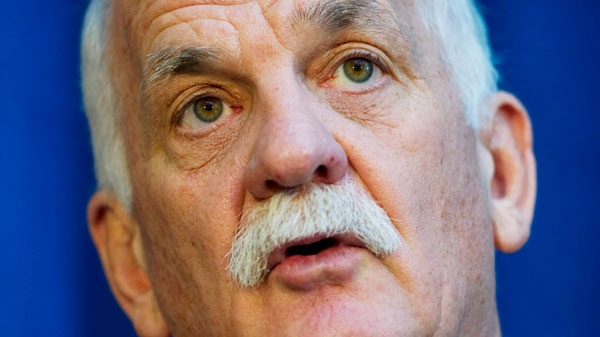 "Crunch the numbers: Crime rates are going down" was the headline on a report published Tuesday by Toronto criminal lawyer Edward Greenspan and criminologist Anthony Doob of the University of Toronto.

It draws on Statistics Canada reports that violent crime overall has declined every year since 2000. The agency said last summer that reports of murders, serious assaults, sexual assaults and robberies were all down again in 2009.

The Harper government's plans to spend billions of dollars on lock-'em-up policies could be a defining issue in the next federal election. They would also mean huge costs for provinces already dealing with overcrowded jails.

"The point that I constantly make is what has the crime rate got to do with a dangerous person being on the street?" Toews said at a news conference Tuesday in St. John's, N.L.

"A dangerous person who threatens the safety and security of individuals ... should not be on the streets regardless of what the crime rate is. That's our focus: to ensure that dangerous people are not on the street."

That said, Toews also asserted: "It's not that crime rates are falling. The reporting of crime is in fact falling."

The Conservatives have seized on increased rates of certain violent crimes. They include attempted murder, extortion, gun crimes and criminal harassment.

Toews' remarks echoed parts of a contentious critique published earlier this month of how Statistics Canada compiles crime numbers. The study for the Macdonald-Laurier Institute by former Harper government adviser Scott Newark was raked by criminologists as an embarrassingly selective and highly politicized contortion of justice data.

"By pretending that crime is going up, the government seems to say therefore we have to bring in harsher sentences, put more people in prison and so on," Doob said Tuesday in an interview.

"Harsher sentences and putting more people in prisons aren't going to do anything about crime."

In fact, exposing first-time offenders to seasoned inmates could backfire, Doob said. He cited research done in the U.S. in eight states that found young offenders who visited prisons as part of so-called Scared Straight programs tended to commit more, not less, crime.

"I know from looking at the data that we're not being made safer," Doob said. "What we know is there are better uses of the funds."

Tax dollars would be better spent on crime prevention strategies to get at the roots of the problem: addiction, poverty, lack of education and unemployment, he said.

The Conservative government increased crime prevention funding by 46 per cent to just over $29 million this year.

But that amount is eclipsed by the $2.1 billion over five years it expects to spend on a single piece of legislation wiping out double credit for time served before sentencing.

Parliamentary Budget Officer Kevin Page has estimated the cost of that single legislative change at closer to $5 billion for Ottawa -- and at least $5 billion more for the provinces. The final tally could be much higher, he has said.

Liberal MP Scott Brison called the estimate "unbelievable." He said it was provided with no supporting documents or detail on how much the bills will wind up costing provinces.