Cost versus fuel efficiency: hybrids to watch in 2010 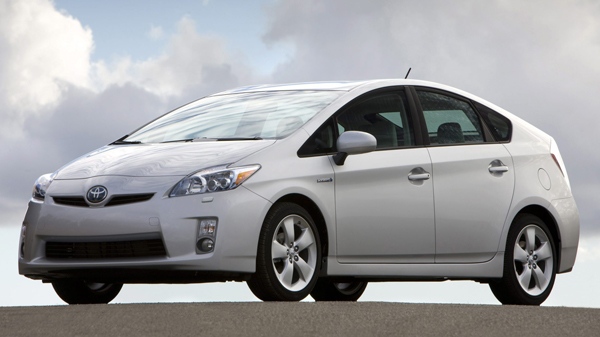 This photo released by Toyota Canada shows the 2010 Prius.

Last year was a tough one for automakers, with a crippling recession resulting in tanking sales that put the giants of the industry on the edge of collapse.

But as carmakers recover, along with other segments of the economy, they're embracing green vehicles as the future of the flailing industry.

Sales of cars and light trucks have surpassed their pre-recession numbers in December, according to a recent report from Scotiabank Group. With that encouraging news, automakers have begun boosting production.

A tiny but growing number of the cars rolling off their assembly lines are so-called "green" vehicles. They feature higher gas mileage and usually draw on electrical power as well as gasoline.

The Toyota Prius has been the dominant hybrid so far. It was redesigned for 2010, with a new interior and better fuel efficiency, and is expected to generate a lot of attention in the industry.

As Jason Stein, editor of the Detroit-based Automotive News put it, "the Prius stands alone."

"It's proven that it's an absolute winner in the North American market, and everybody else is trying to catch its coattails," he told CTV.ca.

But the popularity of the Prius is under threat due to braking problems that have prompted Toyota to issue another recall. The Japanese automaker was already reeling from an unrelated recall affecting millions of its vehicles, and one that Stein says could tarnish the company's brand.

As a result, the Prius is at risk of losing some of the attention it has been getting from consumers, Stein said.

With the bulk of the economic recovery still ahead, and unemployment threatening to reach 10 per cent in Canada this year, price will presumably be a major factor in the green-car market, as elsewhere.

Hybrid vehicles tend to be more expensive than their traditional counterparts. DesRosiers sees that as a major obstacle limiting green cars to a niche market.

With price in mind, the five-passenger Honda Insight may fare better compared to some of its competitors.

At $23,900, it's the most economically priced hybrid for sale in Canada (nearly $3,000 cheaper than last year's Prius). According to Transport Canada, the Insight's 4-cylinder gas engine and 15-kilowatt electric motor can power it 100 kilometres in the city, on 4.8 litres of gas.

For more money there's the Ford Fusion Hybrid, a mid-sized sedan that's been winning awards. If you believe the fanfare, the Fusion Hybrid may be the bandwagon to jump on. But for $31,999, it's a big step up market. The hybrid technology adds $6,200 to the cost, compared to the conventional Fusion.

Later this year, the Chevrolet Volt will be rolled out in several cities across North America. The Volt can run 64 km if its battery is fully charged, without having to rely on a back-up gasoline engine.

Stein says the Volt is expected to set a new standard in green-car technology. Canadians will be able to catch a glimpse of the Volt during the 2010 Olympics in Vancouver, where it will be on display.

The price of the Volt hasn't been released. But it may be as high as $40,000, which could limit its appeal.

Industry players say that such cost concerns will shape how the green-car market evolves.

Mike Jackson, the CEO of America's biggest auto retailer, has been particularly vocal about whether many of the hybrid vehicles coming to market will be economically viable.

"The cost is completely out of whack," he said at the Washington Auto Show two weeks ago. "It's going to be a train wreck."

When it comes to green cars, the industry's number-one problem is gas prices, Jackson said. They've come down from their historic high two summers ago, hovering at or below $1.00/ltr. since November 2008.

Consumers seem willing to swallow the buck-a-litre prices at the pumps to power their conventional gas engines, and until fuel prices creep back up to historic highs the "green" car industry could sputter, Jackson says.