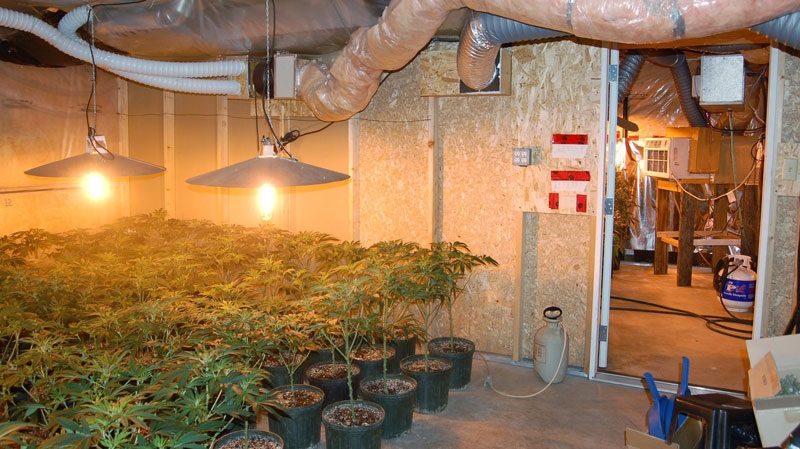 Niagara police discovered an entire basement of a home had been sub-divided into six separate rooms that were dedicated to the production of marijuana, pictured here in Niagara Falls, Ont., May 4, 2011. (HO - Niagara Regional Police Service / THE CANADIAN PRESS)

OTTAWA - Canada's cops, firefighters and paramedics need better training on the hazards they face when inadvertently entering grow-ops and drug labs -- some rigged with booby traps meant to injure or kill them.

That's the strong message from three dozen so-called first responders in Canada's major population centres who were surveyed in a recent study by the federal Justice Department.

"All first responders indicated that these 'chance discoveries' caused them the most concern in terms of the safety and health risks they face upon entering a site," says the study, completed this spring.

The report surveyed 36 emergency workers across Canada, part of a federal-provincial project begun in 2002 to tackle the rise of indoor marijuana cultivation facilities, known as grow-ops, and clandestine illegal-drug laboratories, or clan-labs.

A copy of the March 24 report was obtained by The Canadian Press under the Access to Information Act.

Each worker responded to an average of between five and 10 incidents each year that involved clan-labs, and between 10 and 20 that involved grow-ops. Sometimes there was a house fire, explosion or medical emergency -- and in about half those cases there was no warning of any illegal operation at the site.

The study noted instances in Ontario of booby traps, such as electric wire attached to doors and windows, or a device that releases toxic chemicals on anyone entering.

"These anti-personnel devices in production sites are primarily intended to kill or injure people. ...

"Many participants in this study were fearful of accidentally walking into booby traps or suddenly finding themselves in the line of gun fire and-or near explosions."

Grow-ops typically draw between three and 10 times the amount of electricity of a normal home, greatly increasing the risk of electrocution when firefighters burst in with hoses. Fires in these high-risk facilities are better doused with something other than water.

"The likelihood of police officers, firefighters, and paramedics getting injured at clandestine labs is typically much higher when the labs are discovered by chance," says the report, citing recent research.

"The majority of injuries resulting from the discovery of illicit drug productions occur when things go wrong in the first few minutes of the operation."

The specially trained Health Canada chemists were least likely to face unexpected health risks, largely because their job is to ensure a clan-lab site is chemically safe after it has been thoroughly checked by police and fire officials. But the chemists interviewed said they still worry about their health and safety from lingering toxins.

They also want better training, standard provincial or national protocols and more information sharing, such as a pooled database. Some called for specialized response units trained to deal with emergencies at grow-ops and clan-labs.

A spokeswoman for the federal Justice Department said the findings are still under review. "Standards have not been drawn up at this time," Carole Saindon said in an email.

A member of the Ottawa police drug squad says his team members are trained to spot booby traps when entering a grow-op.

"We're aware of this and we're always watching out for that," Det. Jamie Foley said in an interview, adding it's sometimes hard to tell whether a grow-op has sloppy wiring or whether it's deliberately rigged to zap intruders.

Foley has never been caught in a booby trap in his five years on the job, but says grow-ops are by themselves unhealthy, especially the air because of mould in the walls, ceiling and rafters.

Members of the squad, who raid an average of 30 grow-ops each year, are heavily outfitted with respirators, safety boots and Tyvek suits, which protect against chemicals.

"At the end of the day, you've got to know you're safe going home," said Foley, who was not part of the Justice Department study.