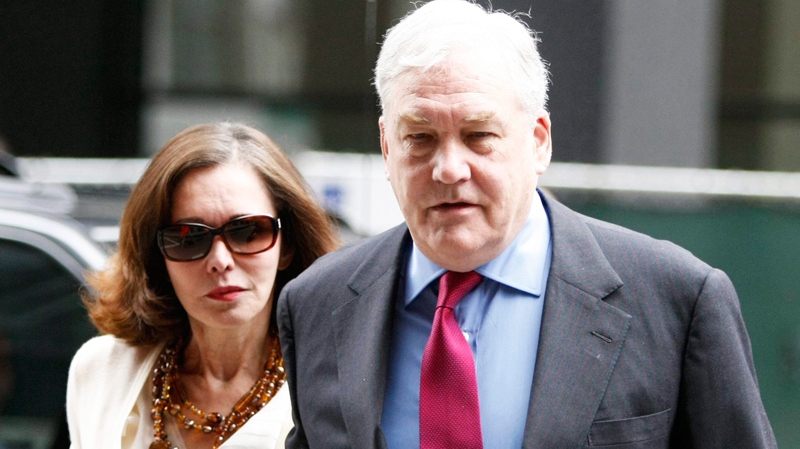 Conrad Black arrives at Federal Courthouse with his wife Barbara Amiel, Friday, June 24, 2011 in Chicago. Black, 66, once one of the world's most powerful media moguls, will appear in court for his re-sentencing hearing on two fraud convictions, where a judge will decide whether he heads back behind bars or remains free for good. (AP / Kiichiro Sato)

TORONTO - Conrad Black is suing his former business partner and chief prosecution witness who testified against him at his 2007 fraud trial.

The Chicago Sun-Times reported Wednesday that Black has filed a suit that alleges David Radler hurt the value of Black's stake in Horizon Publications Inc., a U.S.-based chain of small newspapers.

The lawsuit in Cook County Circuit Court accuses Radler of illegally adding shareholders and debt to Horizon. The Sun-Times report says the suit by Black, who returned to prison this week, called Radler "an infamous Canadian citizen" and referred to his "Cain-like betrayal."

For decades the two businessmen ran the Hollinger newspaper group and its various affiliates -- Black as CEO and Radler as his chief operating officer.

They built Hollinger into one of the world's biggest newspaper companies, with operations in Canada, the United States, Britain and Israel. However, Hollinger was sold off piece by piece over the last decade.

Radler said Wednesday he was aware of the lawsuit, but had not seen the legal documents yet.

"It is hard for me to make a comment when we haven't seen it OK, that's all I can tell you," Radler said from Vancouver.

"I will certainly be making the comment at the appropriate time."

Radler pleaded guilty to a single count of mail fraud under a plea bargain with U.S. prosecutors that included his testimony against his co-accused. He received a sentence of 29 months and paid a $250,000 fine.

Radler also agreed to a civil settlement in 2007 with the U.S. Securities and Exchange Commission that saw him agree to pay US$28.7 million and be banned for life from being an executive or board member of any public company in the United States.

Sun-Times Media Group Inc., the company formerly controlled by Black when it was called Hollinger International, also settled a suit in 2007 that saw Radler as well as publishing companies including Horizon and Bradford Publishing Co. pay US$63.4 million.

Black returned to a Florida prison Tuesday to serve the remainder of his sentence for fraud.

Since he was released on parole, Radler has been running the Alberta Newspaper Group, a privately held regional newspaper chain.