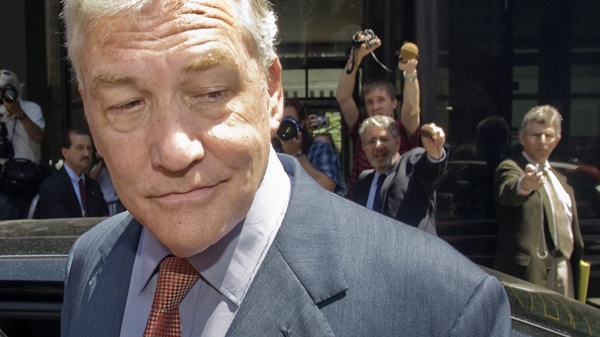 TORONTO - A new development in the case against Conrad Black may frustrate his efforts to return to Canada while he is free on bail awaiting an appeal of his fraud convictions -- but it could also mean his case is on the fast track to a final resolution.

A U.S. appeals court has ordered written arguments from prosecution and defence lawyers in the case against the former Canadian media by Aug. 16 -- the same day Black is set to provide Chicago Judge Amy St. Eve with a financial affidavit that could be a determining factor in his request to leave the U.S. and travel to Toronto while on bail.

That written briefs have been requested suggests the case is moving forward at a significant pace and increases the likelihood that St. Eve will decide Black should stay in the U.S. in order to appear again as soon as possible, white-collar crime expert Jacob Frenkel said Tuesday.

"It's very likely that the judge will continue the stay in the U.S. order in effect and set another status hearing for another 30 days out," the former U.S. prosecutor said.

"As soon as 7th circuit reaches a decision, there's no reason for further delay for Judge St. Eve to decide what's next."

The submissions will be reviewed by a panel of three appellate circuit judges led by Judge Richard Posner.

The court granted Black's motion for bail July 19 following a U.S. Supreme Court ruling that narrowed the scope of the law used to convict him on the fraud charges. The decision didn't directly affect a related obstruction of justice conviction and left it up to the lower court to decide whether the fraud conviction should be overturned.

Frenkel said he believes the obstruction of justice conviction could stick, but that Black could be let off with "time served" for the conviction. He has already served over two years of his six-and-a-half year sentence.

A final ruling will likely take a few months, a relatively short time span for such legal challenges.

"This likely will end up back before Judge St. Eve and depending on the outcome we could see a whole new round of appeals applications," Frenkel said.

Black was told Friday he must remain on American soil despite a request to return to Canada in light of his wife's undisclosed health issues.

But even if the U.S. ultimately decides to let Black travel, whether Canada will let Black return is another question. He's been convicted of an indictable offence and is no longer a Canadian citizen. His only recourse may be a special dispensation from Citizenship and Immigration Minister Jason Kenney.

But some experts suggest Black may be able to enter Canada because he is married to a Canadian citizen. His wife, Barbara Amiel has reportedly lived in the couple's Palm Beach mansion for most of her husband's 28-month incarceration at a federal prison in Coleman, Fla.

The $32-million colonial estate, partially-owned by an investment firm to which Black owed money, has been on the market for several months. Once the house is sold, it's unclear where the couple would reside in the United States if Black is not allowed to return to the only home he still owns, his posh estate in Toronto's Bridle Path neighbourhood.

Black's appeal lawyer Miguel Estrada told the court last week ownership of the Palm Beach is in a state of "flux," and suggested the Blacks might soon be living in a New York City hotel. Estrada also argued the couple should be allowed to return to their Toronto home on account of Amiel's health.

He argued the Palm Beach home "is not a suitable abode in her condition" in the blazing heat of a Florida summer.

Black gave up his citizenship a decade ago to become a member of Britain's House of Lords. He had to surrender his British passport to the court on Friday, although it expired last year.

Black has challenged the IRS's claim, arguing that he was "neither a citizen nor a resident of the United States" and therefore not obliged to pay taxes in the U.S.

The IRS's case against him hearkens back to a far grander period in Black's life, alleging he failed to report and pay taxes on income stemming from personal use of Hollinger's corporate jets, the use of corporate money to buy former president Franklin D. Roosevelt's papers, and Hollinger International Inc.'s purchase 10 years ago of a US$5.9-million New York apartment for his use.

Hollinger once owned the Chicago Sun-Times, The Daily Telegraph of London, The Jerusalem Post and hundreds of community papers in the U.S. and Canada.

At the core of the charges against Black was his strategy, starting in 1998, of selling off the bulk of the small community papers published in smaller cities across the United States and Canada.

Black and other Hollinger executives received millions of dollars in payments from the companies that bought the community papers in return for promises that they would not return to compete with the new owners.