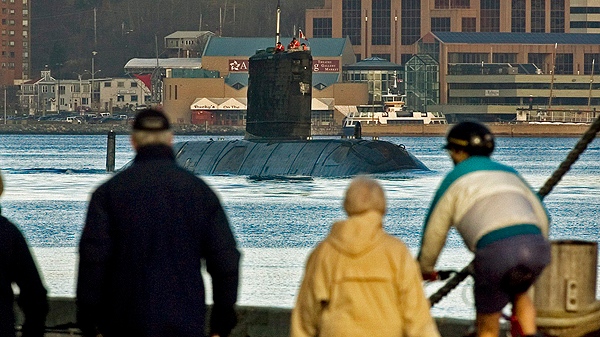 HMCS Windsor will be restricted in its ability to dive deep beneath the seas because of rust, according to a document obtained by The Canadian Press. People walk and cycle along a dock as HMCS Windsor prepares to dock in Halifax on Thursday, Dec. 21, 2006. (THE CANADIAN PRESS/Andrew Vaughan)

HALIFAX - One of the Canadian navy's four Victoria-class submarines will be restricted in its ability to dive deep beneath the seas because of rust, according to a document obtained by The Canadian Press.

Budden recommends the repair be carried out through a "protect and monitor" option which calls for grinding away and priming the corroded areas, with regular checks of those areas to be conducted once the submarine is operational.

But her note says that option would result in a new depth limitation for the submarine.

"Materiel safety of the submarine would be maintained through a depth limitation caveat on the Windsor's submarine safety document register," says the note, obtained under federal access-to-information legislation.

The note was based on research done by defence research scientists in Halifax.

Budden, an officer with the submarine naval architecture division of the navy, says in the note that the military considered repairs involving welding fresh metal onto the vessel's hull, a process called "plate replacement."

That option would involve "no depth limitation," the briefing note says.

But Budden rejects that repair method, saying it would cost between $3 million to $5 million and take a year to do.

Another method labelled as "repair all" was rejected too, as concerns were flagged about the availability of welders, the note said. It would also take one year to do and cost $1 million.

An option to repair the pitted area was also nixed.

"Given the emphasis on not delaying (HMCS Windsor) ... by the project manager, protecting and monitoring the known corrosion defects is the only option left," Budden wrote.

Her note was prepared for Maritime Equipment Project Management, the branch of the navy that oversees its equipment.

Blaine Duffley, director of Maritime Equipment Project Management for submarines, confirmed in an interview that the navy chose to proceed with the "protect and monitor" option.

When asked if a depth limit had been imposed, Duffley responded, "Unfortunately, I'm not at liberty to say."

"The operating parameters of submarines are obviously a classified issue. So I can't speak to what the actual operating level of the submarine would be," he said.

"What I can say is the submarine is safe to perform all expected operations during her operational period until her next extended docking work period."

An extended docking work period is the term the navy uses to describe the extensive overhauls the four submarines must periodically undergo. Duffley said he expected HMCS Windsor would be ready to undock in late 2011, more than two years later than originally expected.

He said it could be approximately six years before it would be scheduled for another major overhaul.

HMCS Windsor is the newest of the four Victoria-class submarines Canada purchased from the British. Duffley said the Windsor had the least use prior to being mothballed by the British navy.

The Halifax-based submarine was brought to Nova Scotia on Oct. 19, 2001. Since then, it has operated at sea for just 332 days partly due to overhauls and repairs.

The briefing note also says while, "repairs to the pressure hull are highly desirable from a hull husbandry point of view, they are not absolutely necessary."

Duffley said that doesn't mean it must be done.

"That's more from the perspective that in an ideal world you want the hull of your submarine or the body work in your car to be perfect all the time," he said.

"So perfection is the ideal, but rarely do you achieve that."

He also said the decision to "protect and monitor" the hull won't shorten its lifespan.

David Zimmerman, a professor of history at the University of Victoria, said the navy is extremely cautious with any rust due to the pressures the hull repeatedly undergoes as it dives and surfaces.

The author and expert on military history said it's regrettable that a depth limitation would be considered necessary.

"It's unfortunate," he said. "It does obviously impact on the operation of the submarine in times of war or in terms of operational readiness that they can't use the submarine to its full potential in training missions."

The diesel-powered submarines are highly valued by navies within NATO because they can be used to train naval vessels in submarine detection, he added.

Still, Zimmerman said the corrosion is another example of the compromises Canada made when it purchased the second-hand submarines rather than buying or building new submarines.

"It was a terrible trade-off I think," he said.

"It was part and parcel of a government that at the time wasn't willing to spend the money to acquire new submarines and state-of-the-art submarines."

The British Royal Navy launched the submarines in the late 1980s and early 1990s before taking them out of service in 1994.

HMCS Chicoutimi caught fire in 2004 that killed one sailor during the submarine's maiden voyage in the North Atlantic. It is still in dry dock undergoing an overhaul.