Climate, financial crisis to be on G20 agenda: leak 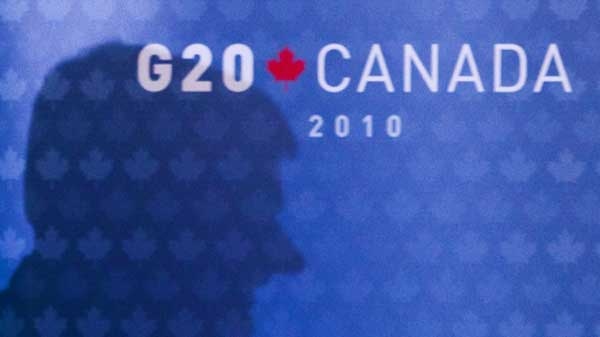 TORONTO - The environment is grabbing a growing part of the G20 summit agenda, despite Prime Minister Stephen Harper's hopes of strictly limiting the discussions to the global economy.

A leaked draft of the G20 communique from earlier this month shows that both international development and climate change have seized a large part of the group's attention.

And top U.S. officials said Wednesday that the disastrous oil spill in the Gulf of Mexico shows that the G20 needs to confront the world's "over-consumption of fossil fuels."

In an opinion piece written for the Wall Street Journal and distributed by the White House, two key appointees of President Barack Obama say the G20 countries need to say how and when they will eliminate their fossil fuel subsidies.

"We must address the urgent challenge of our energy needs, as the current disaster in the Gulf makes clear," write Treasury Secretary Timothy Geithner and Lawrence Summers, the director of the National Economic Council.

The G20 draft communique was short on detail and long on platitudes, but did contain two full paragraphs on climate change.

It commits countries to investing in green technology and doing whatever they can to boost international talks for a climate change pact in Mexico at the end of this year.

"We reiterate our commitment to a green recovery and to sustainable global growth, including through investments in clean energy," says the draft document, leaked by Greenpeace just three days before the Toronto summit.

And like Geithner and Summers, the draft underlines the need for countries to give up their fossil fuel subsidies.

"It's progress," said Robert Fox, executive director of Oxfam Canada. "We can't duck this issue ... but the language is still pretty general."

G20 experts gathered at a symposium agreed Thursday that the summit had the potential to make or break momentum on climate change negotiations.

"The G20 can set the tone. The G20 can galvanize action," said former prime minister Paul Martin, a co-founder of the G20 idea who is still heavily involved in the group's dynamics. "It's going to be the test of the G20."

While the G20 is not the appropriate place to resolve the world's discussions on energy consumption and climate change, it has the power to lead a sustained effort to promote renewable energy, said Jomo Kwame Sundaram, the top G20 negotiator for United Nations' Secretary General Ban Ki-moon.

"We need to set poor countries, especially, on an alternative-energy pathway," Jomo said.

While Harper has been reluctant to even mention the environment in conjunction with the G20, Ottawa did give a show of faith on Wednesday. It put forward $400 million as its share of a rich-country fund to help poor countries adapt to climate change.

The announcement had long been expected -- so long, in fact, that many critics wondered if it would ever happen.

And in Ottawa senior federal officials are urging Harper to lead by example and end some of the tax breaks ranted to Canada's oil patch, sources say.

The officials argue that the move would save the federal government hundreds of millions in foregone revenues, and would also signal that Canada is willing to co-operate in its own way on climate change issues.

In the draft communique, the G20 countries also agree to set up a working group dedicated to eradicating poverty and helping developing countries.

Harper has argued that the G8 is where development talks belong, since it is made up of the world's biggest donors. But he is a lonely voice, especially as the likes of Korea, China, Brazil and India tackle their own poverty problems and help others do likewise.

Those countries are all in the G20 but not the G8.

Still, the communique added weight to fears that the G20 was losing its ability to act in a co-ordinated way. During the financial crisis, the G20 was able to agree to join together and form a massive stimulus program that put a floor under the global recession.

But now, in attempts to prevent such crises from happening again, they do not seem to be making much progress in seeing eye to eye on how to reform regulation of financial institutions or how best to put the world on a steady path of growth.

"There is no room for complacency," the draft communique declares, but there were few details about how the G20 would actually act.

Top negotiators were to meet Wednesday night and Thursday in the hopes of navigating their way through demands from the United States to keep stimulus at the ready, and countering demands from Europe to cut budgets deeply in order to regain market confidence.

Senior Canadian summit officials stressed that progress was being made, with individual countries coming forward one by one to offer "down payments" for long-term global growth.

Specifically, they pointed to: