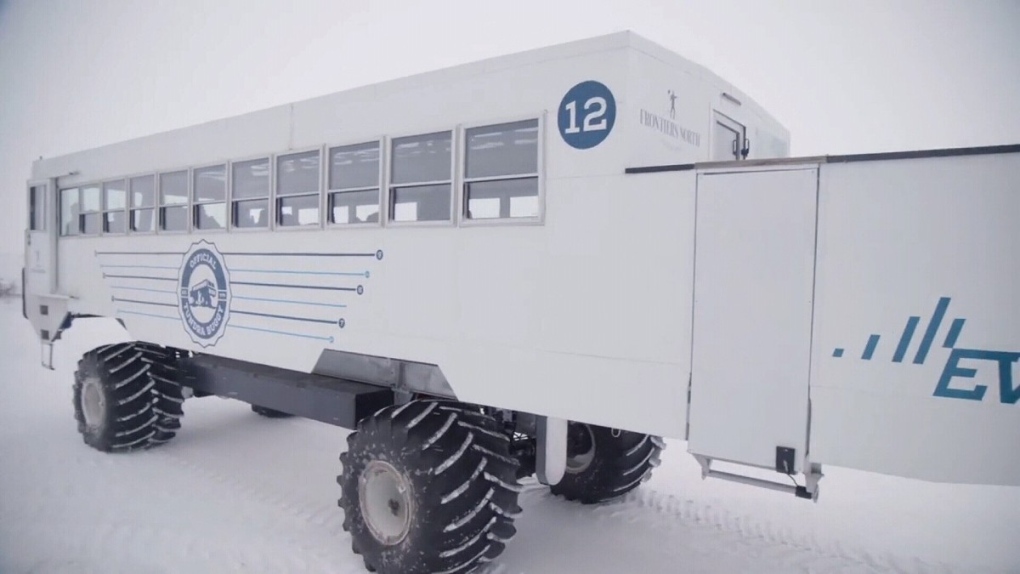 The Frontiers North Adventures EV Tundra Buggy is seen in a photo.

BARRIE -- A vehicle used to transport tourists on polar bear spotting adventures in Churchill, Man., has received a green makeover.

Frontiers North Adventures says one of its Tundra Buggies, which seats up to 40 passengers, has moved from diesel to electric power.

The vehicle was converted using a repurposed battery from an e-bus. It is now the first of its kind in the world.

“By transitioning from diesel to electric, we’re going to -- in a normal season -- we will reduce our greenhouse gas emissions by about 8.3 tonnes of carbon dioxide,” John Gunter the CEO and president of Frontiers North Adventures, told CTV News.

Gunter said the Tundra Buggy was shipped from Churchill to Winnipeg, where it was lifted off its frame.

“We rolled out the diesel undercarriage and we rolled in a new frame, new suspension, new axles, new propulsion, new motors,” he said.

In a blog post last week, the company said the project was done in collaboration with Red River College, to transform one of the vehicles in its fleet.

Frontiers North Adventures said the collaboration was “made possible through Manitoba’s Conservation and Climate Find, the Vehicle Technology Centre, and support and technical services from RRC Polytech’s Technology and Energy Centre.”

In a blog post, the company said the new EV Tundra Buggy emits “zero emissions and minimal sound,” which helps to provide a “less-intrusive experience for our guests and wildlife.”

According to the post, the vehicle was taken out to roam the subarctic tundra near Churchill “amidst the wild polar bears” on Nov. 20.

Gunter said in addition to contributing to the company’s reduction in greenhouse gas emissions, “the main deliverable of this EV Tundra Buggy will be a silent touring experience for our guests."

“The EV Tundra Buggy makes it easier for machines to fade more into the background of any guest’s wildlife experience in Churchill,” Gunter said in the blog post.

The company said it plans to convert all 12 vehicles in its fleet from diesel to electric power before the end of the decade.

“As we continue to transform our remaining Tundra Buggy fleet, our GHG emissions could be reduced by more than 3,600 Tonnes of carbon dioxide over the next 25 years,” the blog post reads.