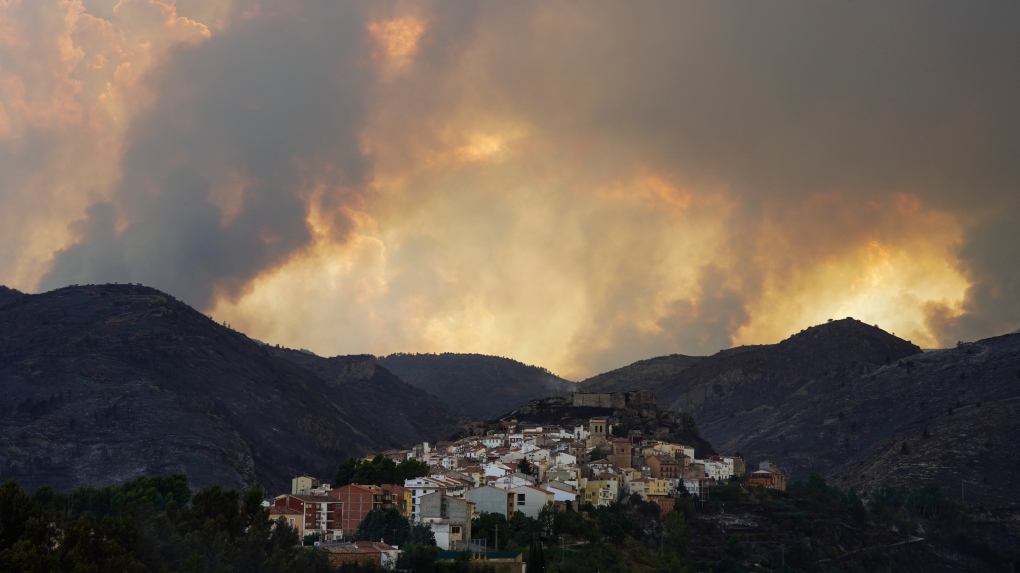 Clouds of smoke cover the sky during a wildfire near Bejis, eastern Spain, on Wednesday, Aug. 17, 2022. (AP Photo/Alberto Saiz)
MADRID -

A wildfire burning out of control in Spain's eastern province of Valencia has become one of the country's biggest this year, and 35 aircraft have been deployed as the blaze entered its fifth day, authorities said Friday.

The blaze has already scorched more than 19,000 hectares along a 137-kilometre perimeter. Rain boosted hopes the fire could be brought under control on Thursday but strong winds have made the fire "very aggressive," the Valencian regional government said.

Four people were still hospitalized after suffering severe burns Wednesday when several passengers tried to jump off a train that had stopped and tried to go back amid surrounding flames. The train had inadvertently headed into the fast-spreading wildfire.

Regional government head Ximo Puig has requested a report from the firefighting services to clarify why the train was allowed to proceed through the burning area.

Spain has been hit harder than any other European country by forest fires this year, according to the European Commission's Copernicus Earth observation program. This year, wildfires in Spain have burned four times more land than they did during the last decade.

Up to early August, 43 large wildfires -- those affecting at least 500 hectares -- were recorded in the Mediterranean country, while the average in previous years was 11.