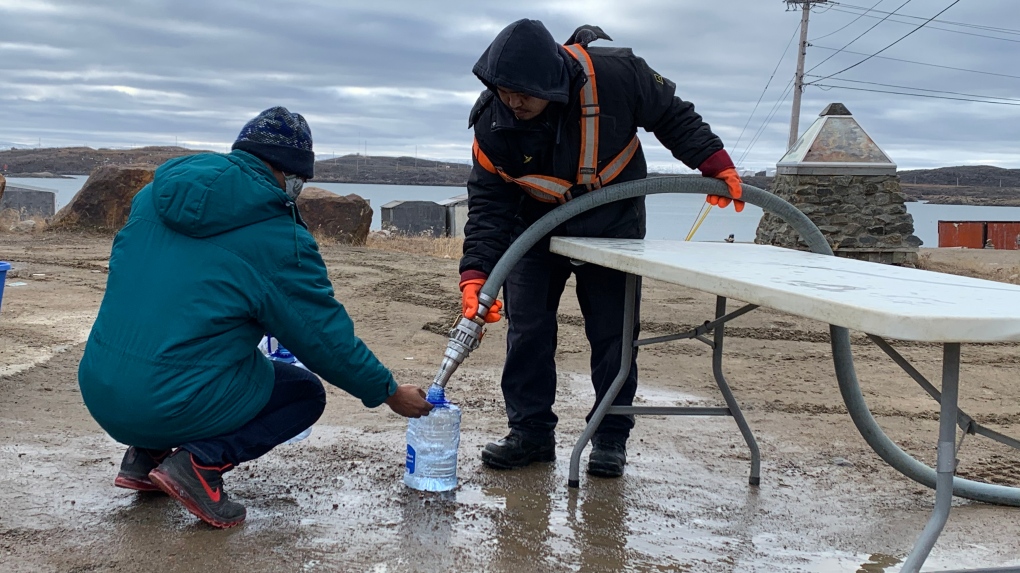 Residents line up to fill containers with potable water in Iqaluit, Nunavut on Thursday, Oct. 14, 2021. (THE CANADIAN PRESS / Emma Tranter)

IQALUIT -- In the summer, the Sylvia Grinnell River near Iqaluit is a popular spot to fish for Arctic char where ice-cold water cascades over rocky ledges.

Now, with thick layers of ice and snow covering the flowing water below, it has become one of the Nunavut capital's main water sources for drinking and cooking.

The other comes in thousands of plastic water bottles that arrive by plane.

It's been almost two months since Iqaluit's tap water was declared undrinkable. On Oct. 12, the city declared a state of emergency when fuel was found in the water supply. Residents had complained the water coming out of their taps smelled like fuel.

Since then, the city has dug up an old underground fuel tank from 1962, which was buried next to the water treatment plant and thought to be the source of the contamination.

Iqaluit Mayor Kenny Bell says he's frustrated because the city's testing has come back clean since Oct. 23, but the Nunavut government has the final say in lifting the do-not-consume order.

The city has installed a device to monitor for petroleum, but the territory says it wants two. It also wants the city to build a system that would bypass the water treatment plant's underground tanks.

Bell says those are important steps to preventing future problems, but he doesn't think they should be tied to lifting the order.

"It could take three weeks, could take a month, could take two months to build the bypass because of parts and labour and what not," Bell says.

"That's going to take time that we frankly just don't have."

The city has said it will cost $130 million to fix the long-term problem and has called on the federal government to pay for it.

Water quality monitoring from the city shows that between Nov. 16 and Nov. 23 all sample results came back negative for petroleum hydrocarbons.

"The water is clean. These requirements are for a future possible event," says Bell.

Throughout the emergency, the city has continued to hand out bottled water to residents at different sites around the city.

But staff are strained, Bell says, and the city has had to close its gym, pool and two arenas to reallocate workers.

"We're offering $32 per hour to hand out water, but we've only hired a couple of people. We just need more staff," Bell says.

"We're all tired. We were short-handed well before this crisis. It's crap for all of us."

The city has asked the Nunavut government for extra hands, but Bell says that request was denied because the territory has its own staffing issues.

"The (Government of Nunavut) is awaiting confirmation from the contracted engineering firm that the site assessment and required remediation have been completed to assure the risk of repeat contamination has been mitigated," says the statement.

"The Department of Health is working closely with the third party to assess the City of Iqaluit's field investigation report."

Nunavut's department of community and government services, which contracted the engineering firm, did not respond when asked for the name of the company.

The Canadian Armed Forces also arrived in Iqaluit on Oct. 23 to collect and purify water from the Sylvia Grinnell River using a reverse osmosis system.

But the operation ground to a halt on Nov. 22, when high winds knocked over a military tent that was protecting the water purification system.

The military has since moved its system inside a hangar at the city's airport, and plans to truck river water there for treatment. There's no timeline for when the operation will start again.