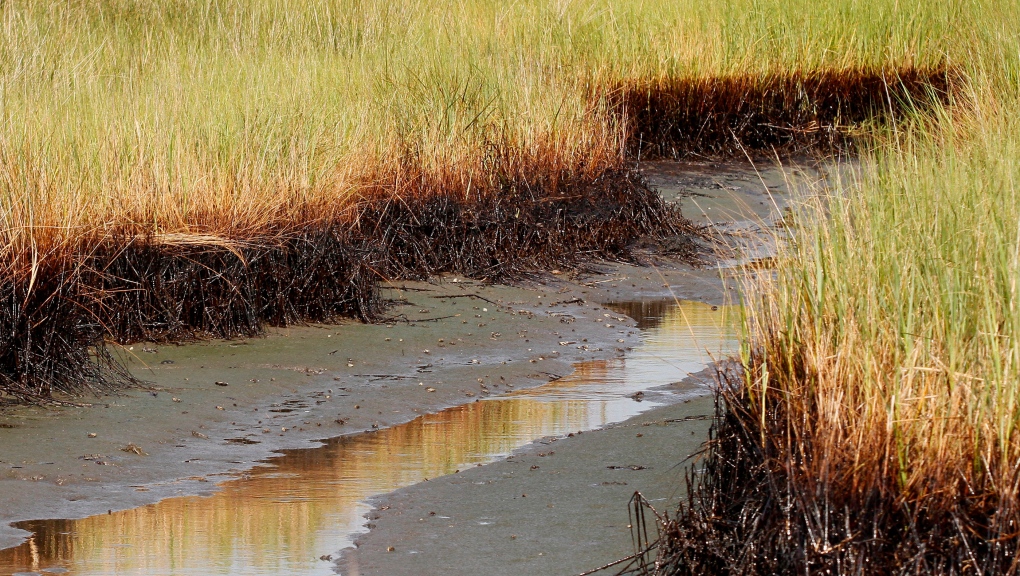 In this Saturday, July 31, 2010, file photo, a ribbon of oil lines the bottom stalks of marsh grass at low tide in a cove in Barataria Bay on the coast of Louisiana. (AP Photo/Patrick Semansky, File)

BATON ROUGE, LA. -- Louisiana will get nearly US$215 million in BP oil spill money for two projects planned to restore more than 4,600 acres of marsh and other habitat in the New Orleans area, Gov. John Bel Edwards said.

Work should begin next year on the projects, Edwards said in a news release Tuesday. The money is from BP's $8.8 billion settlement for natural resources damage caused by the blowout that killed 11 men and spewed more than 100 million gallons (380 million litres) of oil into the Gulf of Mexico in 2010, leaving long-lasting effects.

Both are part of larger restoration plans, the group overseeing Louisiana's share of that settlement noted.

He said the Lake Borgne project near Shell Beach in St. Bernard Parish will create more than 2,800 acres (1,100 hectares) of marsh, making it the largest area ever bid by the agency. The Louisiana Trustee Implementation Group approved $114.7 million for the project.

"This project will have immediate benefits to habitat for fish and birds by reinforcing the degrading southwestern shoreline of Lake Borgne and Lena Lagoon," St. Bernard Parish President Guy McInnis said. "And we need all the natural marsh buffer we can build to lessen the damaging effects of tidal action and storm surge."

The $100.3 million Spanish Pass project, near Venice in Plaquemines Parish, will use an estimated 16 million cubic yards (12 million cubic meters) of dredged material to create about 132 acres (53 hectares) of ridge and 1,700 acres (688 hectares) of marsh. That will be the authority's largest dredging volume so far, Kline said.

"The Mississippi River created our parish and the many historic ridges of our landscape," said Plaquemines Parish President Kirk Lepine. "These features protect against storm surge, reduce saltwater intrusion, provide key habitats and also help retain sediment. The marsh west of Venice has been in need of this level of attention for some time, and I know the people and businesses near Venice will appreciate this massive project and this tremendous investment."

The Oil Pollution Act settlement was part of a 2016 agreement totalling more than $20 billion. It was based partly on the judge's estimate that the 87-day Deepwater Horizon spill spewed nearly 134 million gallons (507 million litres) of crude into the Gulf -- enough to fill the U.S. Capitol rotunda 13 times.

Edwards said the latest projects make up the fifth major restoration plan approved this year by trustees for Louisiana's share of the $8.8 billion.