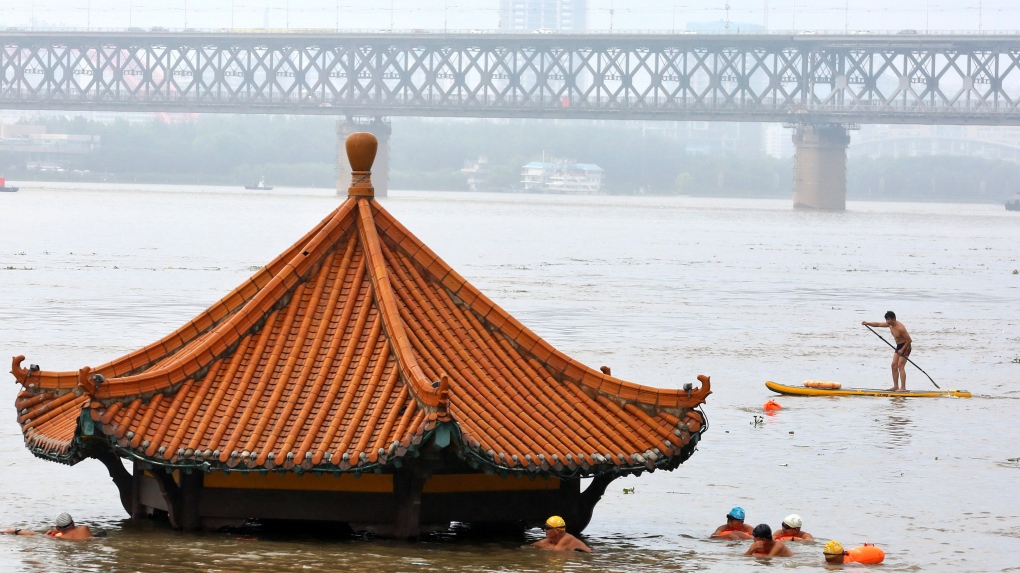 In this Wednesday, July 8, 2020 file photo, residents swim to a riverside pavilion submerged by the flooded Yangtze River in Wuhan in central China's Hubei province. (Chinatopix via AP)

While the globe partly shut down due to the coronavirus pandemic, extremes linked to human-caused climate change intensified, the World Meteorological Organization said in its State of the Global Climate report. The report kicked off a day when the United Nations pushed for new climate action with two reports and a major speech by Secretary-General Antonio Guterres describing the woeful state of the planet.

The UN is ramping up its efforts for a Dec. 12 climate summit in France on the 5th anniversary of the 2015 Paris climate agreement.

The WMO report found that worsening global warming is being seen in all seven key climate indicators, but it said the problem is more than measurements and is increasing human suffering in an already bad year.

"In 2020, over 50 million people have been doubly hit: by climate-related disasters (floods, droughts and storms) and the COVID-19 pandemic," the report said. "Countries in Central America are suffering from the triple-impact of hurricanes Eta and Iota, COVID-19 and pre-existing humanitarian crises."

By the time it ends, 2020 will go down as one of three warmest years on record, despite a La Nina cooling of the central Pacific that often lowers temperatures globally, the WMO report said.

This year is set to be about 1.2 degrees Celsius (2.2 degrees Fahrenheit) warmer than the last half of the 1800s, which scientists use as a baseline for warming caused by heat-trapping gases from the burning of coal, oil and natural gas. Most trapped heat goes into the world's seas, and ocean temperatures now are at record levels, the report said.

"There is at least a 1-in-5 chance of it temporarily exceeding 1.5 degrees Celsius by 2024," WMO Secretary-General Petteri Taalas said in a statement.

The Paris climate accord set a goal of not exceeding 1.5 degrees (2.7 degrees Fahrenheit) of warming since pre-industrial times.

A new analysis by Climate Action Tracker scientists who monitor carbon pollution and pledges to cut them said public commitments to emission cuts, if kept, would limit warming to about 2.6 degrees Celsius (4.7 degrees Fahrenheit) and possibly as low as 2.1 degrees Celsius. Those public commitments include President-elect Joe Biden's promise that the U.S. will have zero net carbon emissions by 2050 and China's goal to do the same by 2060.

"2020 was a shocking year, not only because of COVID, but also because of the impacts from extreme events we saw," said Cornell University climate scientist Natalie Mahowald, who wasn't part of the WMO report.

Among the dozens of extremes that the report highlighted:

-- A record 30 Atlantic named tropical storms and hurricanes, plus a record 12 that made U.S. landfalls.

--The Arctic had record wildfires and a prolonged heat wave culminating in a 100-degree mark (38 degrees Celsius) in Siberia in June. Temperatures in Russia from January to August were 2.7 degrees (1.5 degrees Celsius) hotter than the previous record.

--Record low Arctic sea ice was reported for April and August and the yearly minimum, in September, was the second lowest on record.

--More than 2,000 people died in record summer rains and flooding in Pakistan and surrounding nations. Extensive flooding from extreme rains in Africa killed hundreds of people in Kenya and Sudan. And in China, the overflowing Yangtze River killed at least 279 people.

--Near-record drought and heat caused heavy crop losses in South America. Much of central Europe had extensive drought, with a record 43-day spring dry spell in Geneva, home of the WMO.

Mahowald of Cornell said while these events can't solely be blamed on climate change, "these are the types of events scientists fear will increase due to climate change."