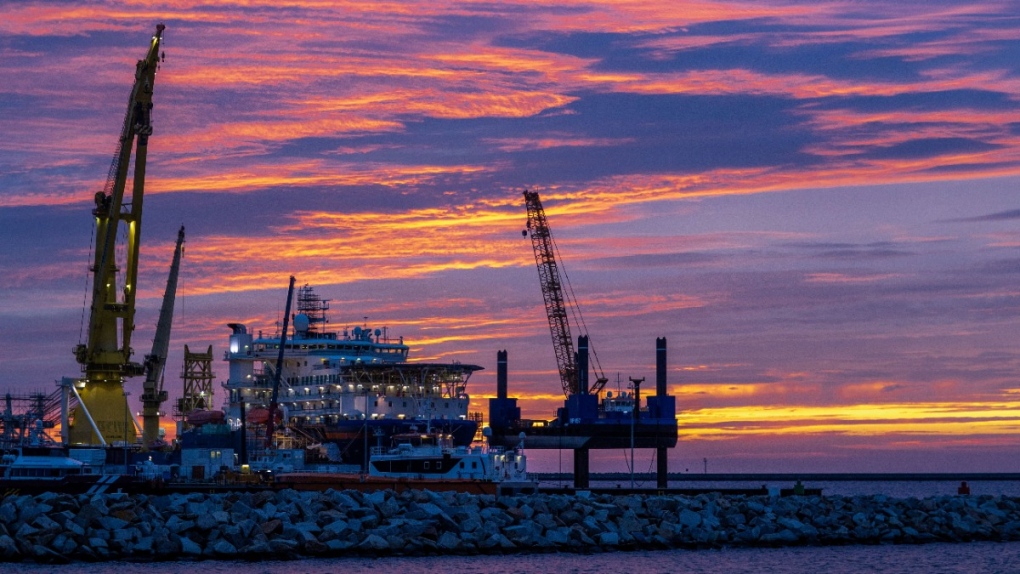 The Russian pipe-laying ship 'Akademik Tscherski' moored at the port of Mukran on the island of Ruegen, Germany, on Sept. 8, 2020. (Jens Buettner / dpa via AP, File)
BERLIN -

Countries scrambling to replace Russian oil, gas and coal supplies with any available alternative may fuel the world's "mutually assured destruction" through climate change, the head of the United Nations warned Monday.

UN Secretary-General Antonio Guterres said the 'all-of-the-above' strategy now being pursued by major economies to end fossil fuel imports from Russia because of its invasion of Ukraine could kill hopes of keeping global warming below dangerous levels.

"Countries could become so consumed by the immediate fossil fuel supply gap that they neglect or knee-cap policies to cut fossil fuel use," he said by video at an event organized by the Economist weekly. "This is madness. Addiction to fossil fuels is mutually assured destruction."

Germany, one of Russia's biggest energy customers, wants to increase its supply of oil from the Gulf and speed up the building of terminals to receive liquefied natural gas.

In the United States, White House spokesperson Jen Psaki earlier this month said the war in Ukraine was a reason for American oil and gas producers to "go get more supply out of the ground in our own country."

Guterres said that "instead of hitting the brakes on the decarbonization of the global economy, now is the time to put the pedal to the metal towards a renewable energy future."

His comments came as scientists on the UN's Intergovernmental Panel on Climate Change began a two-week meeting to finalize their latest report about the world's efforts to curb emissions of planet-heating greenhouse gases.

A separate report, released last month, found half of humanity is already at serious risk from climate change and this will increase with each tenth of a degree of warming.

With temperatures already about 1.2C higher now than before industrialization, keeping the Paris target alive requires a 45% cut in global emissions by 2030, he said.

But after a pandemic-related dip in 2020, emissions rose again sharply last year.

"If we continue with more of the same, we can kiss 1.5 goodbye," he said. "Even 2 degrees may be out of reach. And that would be catastrophe."

Guterres urged the world's biggest developed and emerging economies to make meaningful emissions cuts, including by swiftly ending their dependence on coal -- the most polluting fossil fuel -- and holding private companies that continue to support its use to account.

Hundreds of scientist in Britain and the United States published an open letter Monday calling on academic institutions to stop accepting funding from fossil fuel companies for research into climate change.

Speaking at the opening of the IPCC meeting Monday, the head of the UN climate office urged governments to take immediate action so that targets for 2030 -- such as the European Union's goal to reduce emissions by 55% compared with 1990 levels -- can be met.

"Long-term plans are important and they are needed," said Patricia Espinosa. "But if global leaders, public and private, do not make progress and establish clear plans for climate action in the next two years, plans for 2050 may well be irrelevant."

The IPCC report due to be published on April 4 isn't expected to include direct references to the impacts of the war in Ukraine, said Jim Skea, who co-chairs the expert panel that wrote it.

"Our strength lies in incrementally building up scientific information over a period of time and getting it bought into by governments as well as scientists," he said. "And you can't do that at the same time as turning on a sixpence to address current affairs."

However, it will outline how various energy policies would affect emissions trends in future. These include plans for removing carbon dioxide from the atmosphere again.

"That's a much bigger emphasis from previously," said Skea.

Do you have both Ukrainian and Russian family members? How are you handling the crisis? Email dotcom@bellmedia.ca.