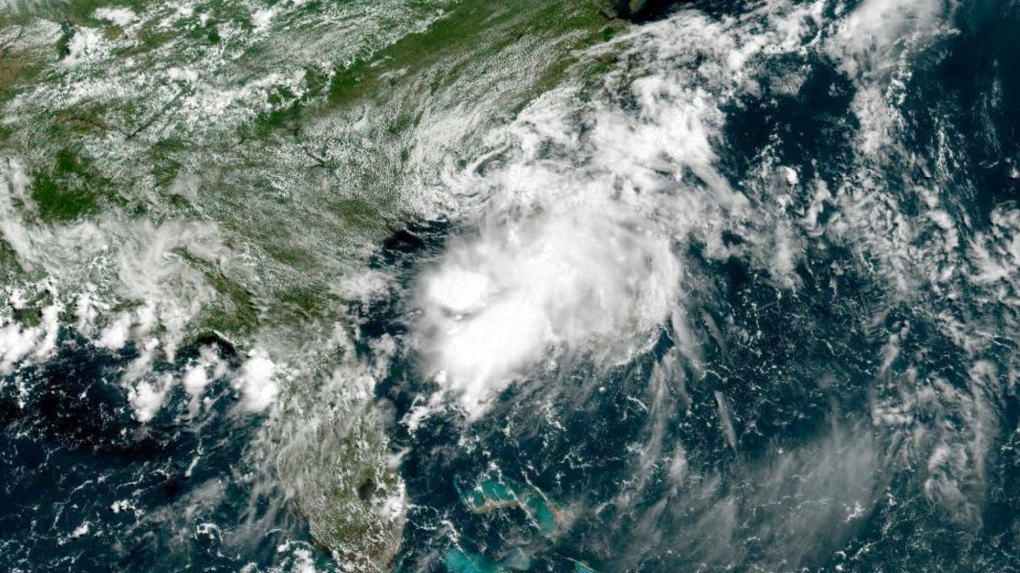 This GOES-East geocolour image provided by NOAA and taken at 11:30 a.m., Saturday, July 2, 2022, shows Tropical Storm Colin of the Atlantic coast of the United States. (NOAA via AP)
MIAMI -

Tropical Storm Colin formed along the South Carolina coast on Saturday morning, bringing rain and winds, though the storm later weakened and conditions are expected to improve by Monday's July Fourth celebrations.

The National Hurricane Center in Miami warned of the possibility of localized flash flooding along the Carolinas coast through Sunday morning.

By late Saturday night, Colin had weakened into a tropical depression and forecasters discontinued the tropical storm warning that had been in effect for parts of the North Carolina coast.

The storm is expected to further weaken and dissipate completely by Sunday night or Monday morning.

"Colin will continue to produce locally heavy rainfall across coastal portions of North Carolina through Sunday morning, where an additional 1 to 2 inches of rainfall is possible," the center said.

Some Fourth of July celebrations planned Saturday in Charleston, South Carolina, were canceled after significant water had pooled on the field at Joseph P. Riley Jr. Park and more rain was expected.

"Obviously, we're disappointed," said Scott Watson, the city's director of cultural affairs. "This promised to be a great family event, and we hate to have to cancel."

Organizers were also forced to cancel a festival planned in Southport, North Carolina.

"The safety of Festival goers, vendors, volunteers, emergency workers and everyone is our highest priority," festival spokesperson Trisha Howarth said in a statement.

Separately, the center of Tropical Storm Bonnie rolled into the Pacific on Saturday after a rapid march across Central America, where it caused flooding, downed trees and forced thousands of people to evacuate in Nicaragua and Costa Rica. There were no immediate reports of deaths.

It's one of the rare storms to make an Atlantic to Pacific crossing without losing tropical storm force, thus maintaining its name. Forecasters said Bonnie is likely to become a hurricane by Monday off the southern coast of Mexico, but is unlikely to make a direct hit on land.

Many Nicaraguans still remember Hurricane Joan, a powerful 1988 storm that wreaked havoc on the coast and caused almost 150 deaths in the country.

"We are waiting for the storm to hit, hoping that it won't destroy our region," Bluefields resident Ricardo Gomez, who was 8 when Joan hit, said before Bonnie arrived.

The area was also battered by two powerful hurricanes, Eta and Iota, in quick succession in 2020, causing an estimated US$700 million in damage.

Officials in Costa Rica expressed concern that the storm would unleash landslides and flooding in an area already saturated by days of rain. The government said seven shelters in the northern part of the country already held nearly 700 people displaced by flooding.

China said Monday it was extending threatening military exercises surrounding Taiwan that have disrupted shipping and air traffic and substantially raised concerns about the potential for conflict in a region crucial to global trade.

A fragile ceasefire deal to end nearly three days of fighting between Israel and Palestinian militants in Gaza held into Monday morning -- a sign the latest round of violence may have abated.

Hope for 'significant change' in all of sports following Hockey Canada board chair's resignation: lawyer

The recent resignation of Hockey Canada's board chair could be a sign of further departures to come, says Simona Jellinek, a sexual abuse and assault lawyer.

Heat warnings still in place for several provinces across the country

Environment Canada has extended heat warnings in a number of provinces, as unseasonably hot conditions continue across the country.