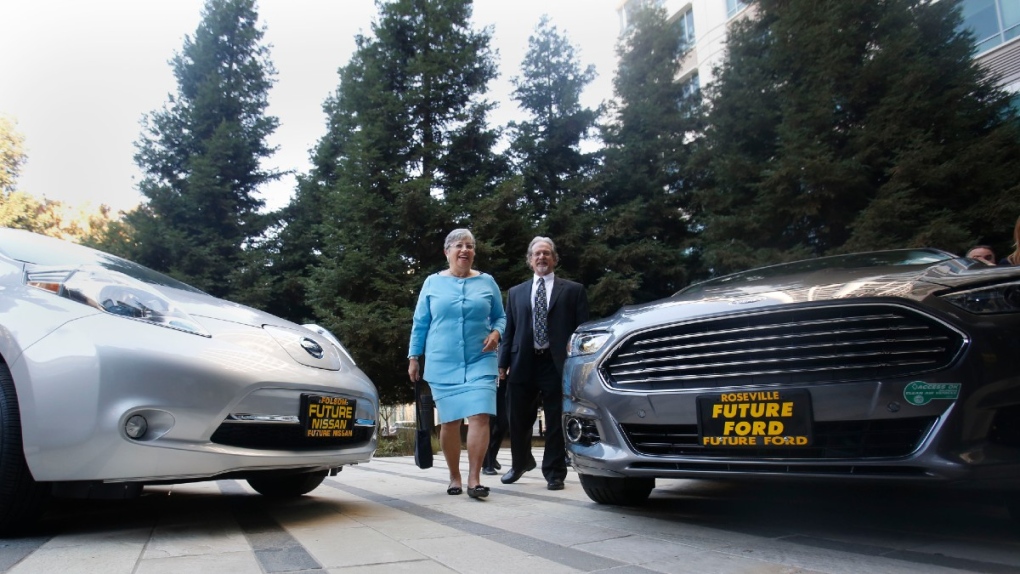 SACRAMENTO, CALIF. -- Over four decades, Mary Nichols has been the regulator behind some of the nation's most ambitious climate policies and, in recent years, she's been their staunchest defender against U.S. President Donald Trump's effort to dismantle them.

With Joe Biden heading to the White House, Nichols hopes she is not done yet.

Nichols, 75, ends her second tenure as chair of the California Air Resources Board next month, a job that's made her the top air and climate regulator for the nation's most populous and economically influential state. She is viewed as a leading contender to be named as Biden's administrator for the Environmental Protection Agency.

Heather McTeer Toney, senior director of Moms Clean Air Force, and Mustafa Santiago Ali of the National Wildlife Federation, both former EPA officials, also have support for the job. Biden has signalled climate change will be a top priority.

For Nichols, it would cap a career of championing stringent air pollution rules, negotiating landmark vehicle emissions standards and implementing California's carbon trading system. She worked at the EPA from 1993 to 1997 as head of the Office of Air and Radiation.

"Not everybody has actually run a climate action program, or an air program for that matter. And I like working with large bureaucracies," Nichols told The Associated Press. "If they offered it, I would take it."

Biden's transition team hasn't said when he'll announce environmental and energy nominees, and Nichols hadn't been interviewed as of midweek. Nichols has worked before with Vice-President-elect Kamala Harris, who was previously California's attorney general. If Republicans hold the Senate, she may have a tough road to confirmation due to their opposition to environmental and business regulation. Republicans loyal to Trump are sure to oppose her, as California styled itself as the resistance to his administration.

To her allies, Nichols' decades of experience implementing climate policy and her long relationships make her an ideal candidate to lead the agency as it goes through the arduous process of reversing Trump administration actions. During Trump's tenure, she fought to preserve California's ability to set its own automobile emissions standards and resisted his efforts to roll back power plant pollution regulations.

"There's no one in America who combines both the technical and political work and experience as Mary Nichols has," said former California Gov. Jerry Brown, who first made Nichols chair of the California board in the late 1970s. "Having that wide scope of time and experience is invaluable, totally unique, and absolutely essential to deal with the complexities of climate."

David Pettit, an attorney with the Natural Resources Defence Council in Los Angeles, called her "the most important actor in the climate change movement in California."

But environmental groups are not united behind Nichols. Cities like Los Angeles and Fresno have some of the nation's dirtiest air and high childhood asthma rates. Critics of California's climate approach say the state's policies have left low-income communities behind. The California Environmental Justice Alliance and Friends of the Earth sent a letter to Biden's transition team Tuesday saying Nichols has ignored their suggestions and backed policies that favour industry over people.

"There are just numerous examples of how Mary Nichols has neglected environmental justice and communities of colour," said Gladys Limon, CEJA's executive director.

Washington-based Food and Water Action isn't taking a position on Nichols as a potential nominee, but senior energy policy analyst Jim Walsh said California has pursued a "flawed model that says that we can just make fossil fuels better."

Nichols began her fight against air pollution in the 1970s, when she brought a lawsuit under the Clean Air Act over dirty air in Southern California. Her current stint on the air board began in 2007 under then-Gov. Arnold Schwarzenegger, a Republican.

Transportation makes up the largest portion of the nation's greenhouse gas emissions, and no state has had more power in reducing them than California, which holds a major share of the American car market. The state won the power decades ago to implement its own emissions standards as smog choked Southern California.

But in 2007, the Bush administration denied California's request to set higher vehicle emissions standards, which in turn dictate gas mileage.

But the automakers sensed a political change was coming, and by the time President Barack Obama took office in 2009, Nichols was already in talks with car makers and federal officials about setting one national emissions standard, built off California's rules. Three years later, Obama announced a requirement for the new fleet of vehicles to get 36 miles per gallon real-world driving by 2025, a major step forward.

Just months into his tenure, Trump moved to roll back those standards and revoke California's authority to set its own. Nichols helped persuade five companies -- Ford, Honda, Volkswagen, Volvo and BMW -- to buck Trump. A lawsuit is still winding through the courts, but on Monday, General Motors pulled out and joined with California. Other auto makers may soon do the same, and Biden is likely to end the efforts.

Nichols said she never spoke to Trump throughout the ordeal.

The Trump administration also targeted California's cap-and-trade program, which requires polluters to buy or hold credits to emit carbon, though it lost in court. Some environmental groups oppose the market-based system, arguing it gives polluters too much leeway to continue spewing emissions.

Nichols said the air board is working to reduce pollution in the most polluted areas, but acknowledged there's more work to be done.

As Nichols prepares to leave the air board, California is pursuing more ambitious goals, including net-zero carbon emissions by 2045 and ending sales of new gas-powered vehicles by 2035. They are aggressive targets that Nichols sees as necessary to "avoid catastrophe."

Biden has proposed net-zero greenhouse gas emissions by 2050, which he says will mean a transition away from fossil fuels, though he is not calling for a ban. Nichols said banning oil production or refining could be an effective strategy but it would need to be coupled with major efforts to help the workforce adapt. California is one of the nation's main oil-producing states.

Even a hint at moving away from those industries will bring sharp political fights in Washington. To Brown, the former California governor, Nichols has the experience to navigate them.

"The politics of regulating emissions from all the powerful industries in California is not straightforward, are not harmonious or easy," Brown said. "She's been able to work through the challenges."