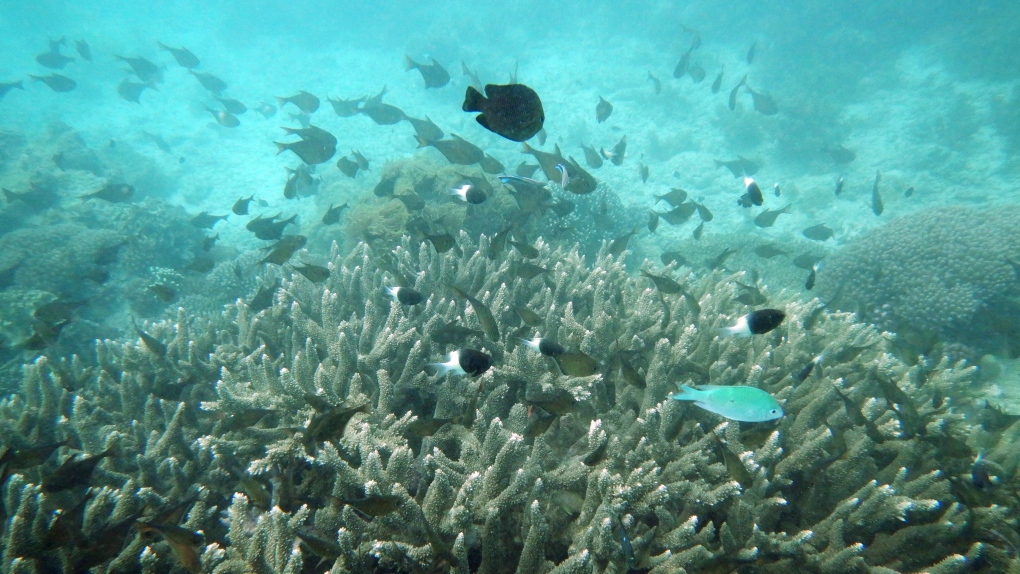 Minutes away from the Kenyan mainland, the densely forested island of Wasini is one of several starting lines for coral reef restoration efforts in the western Indian Ocean. On a rare calm day during the normally turbulent monsoon season, four divers, carrying measuring equipment, shoes and toothbrushes descended in turns to the sea-bed reef restoration site on the Shimoni channel.

"We use coral fragments collected from wild populations to establish the nurseries," said diver Yatin Patel, before slipping into the turquoise waters. "After growing, they're taken to the coral garden." Patel and his team, who are part of the REEFolution foundation, clean the coral nurseries and measure the sizes of the growing corals, which are supported by plastic pipes and pyramid structured steel nets.

The marine area, jointly managed by the foundation and the island's community, has been planting over 8,000 corals a year since 2012 and placed about 800 artificial reef structures in the channel in a bid to restore Wasini's coral gardens. But the project is threatened by growing costs and a planned fishing port in Shimoni, a mere 3 kilometres (1.9 miles) away on Kenya's coast.

The United Nation's Ocean Conference, which begins Monday in Lisbon, Portugal, is set to put protection and restoration efforts for coral reefs back on the agenda. Small island states and coastal African nations will be following up on access to "blue financing" mechanisms, including a $625 billion coral reef funding scheme aimed at protection and restoration efforts as well as cushioning communities who rely on oceans for their livelihoods. Previous commitments to reef restoration by the European Union and coral reef insurance will also be discussed.

The threat of waning fish populations due to dying corals adds to the woes of east African communities, millions of whom are already facing a worsening food crisis because of a prolonged drought in the east and Horn of Africa, as well as ripple effects from the war in Ukraine. In early March, the Intergovernmental Panel on Climate Change issued a dire warning on the threats faced by African coastal and island nations and a complete collapse of corals in the western Indian Ocean.

The Wasini Island coral initiative is one among many dotted across the Africa's western shores, after a series of severe coral bleaching bouts due to warming ocean waters. After a particularly devastating year in 1998, due in large part to the natural weather phenomenon El Niño, huge stretches of the Indian Ocean's corals – from Somalia to the South Africa – were badly affected.

Coral bleaching occurs when extreme temperatures and sun glare simultaneously trigger corals to flush out algae, causing them to turn white. Corals can survive bleaching events, but are under greater stress and can't effectively support marine life, threatening the populations that depend on them.

Tim McClanahan, a senior conservation zoologist at the Wildlife Conservation Society said that 1998 wasn't the first such event – there was one in 1983, and since then there have been three in the past two decades, in 2005, 2010 and 2016. The prevalence of mass coral bleaching along the western Indian Ocean has worried scientists for decades and intensive studies to understand and map out interventions to curb the phenomena are ongoing. Many of these bleaching events are directly linked to climate change, McClanahan said.

The Wasini coral restoration project followed in the footsteps of Nature Seychelles, a conservation non-governmental organization in the Seychelles archipelago which initiated the western Indian Ocean's first coral replanting exercise in the same year and is still ongoing over a decade later. A similar project was undertaken in Tanzania.

But Wasini's corals in particular are in bad shape, said McClanahan.

"There are some areas in Tanzania, Mozambique and Madagascar that are in better condition. We are working to protect those reefs," he said. He argued that protection programs are much more successful than those that aim to restore badly bleached corals.

"We found it expensive and also over the long term many of the corals we planted died," he said of the Wildlife Conservation Society's coral restoration attempts. "The restoration efforts will not solve this big scale problem."

The Wasini reefs restoration project also faces the threat of destruction and pollution from the proposed construction of a deep sea fisheries port in Shimoni. The port is one of the key pledges that the Kenyan government made at the first U.N. ocean summit in Nairobi in 2018 and will be reiterated during the followup summit in Lisbon on Monday.

According to the environmental impact assessment report obtained by The Associated Press, the construction of the port will undermine corals, fish and other marine organisms due to the massive plumes that will be generated through dredging.

Moderna CEO says Covid vaccines will evolve like 'an iPhone'

Forget taking two to three COVID shots a year. Moderna hopes to roll out a single-dose annual booster to cover the coronavirus, the flu and another common respiratory virus within the next five years.

The Edmonton Oilers say they are mourning the death of Ben Stelter, a six-year-old boy with cancer whom the team rallied around during their run to the Western Conference final.