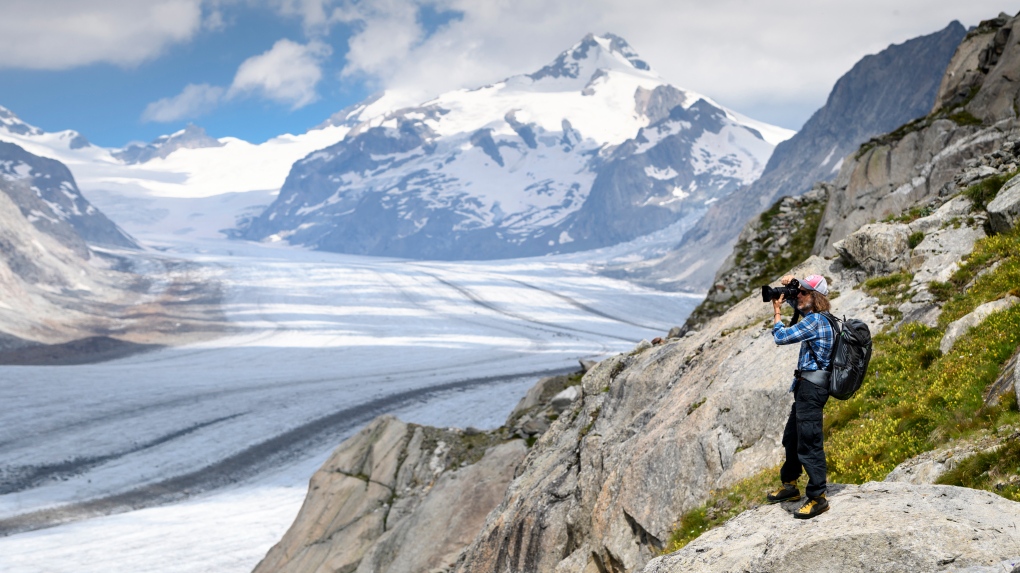 In this July 21, 2020 file photo, Swiss photographer David Carlier takes photographs of the Swiss Aletsch glacier, the longest glacier in Europe, in Fieschertal, Switzerland. Swiss voters are casting ballots Sunday June 13, 2021, in a referendum on a proposed “carbon dioxide law” that would hike fees and taxes on fuels that produce greenhouse gases, as their Alpine country experiences an outsized impact from the fallout of climate change.(Laurent Gillieron/Keystone via AP, File)

GENEVA -- Exit polls on Sunday indicated that Swiss voters appear to have narrowly rejected a proposed "carbon dioxide law" that would have hiked fees and taxes on fuels that produce greenhouse gases.

The Alpine country has been experiencing an outsized impact from climate change. Switzerland has faced a rise in temperatures that is twice as fast as the global average, the government says. Greenhouse gases -- notably carbon dioxide -- are seen as the primary culprit.

The proposal would have revised and strengthened an existing law that was aimed at reducing CO2 emissions by 2030. It would have enacted new taxes on CO2-generating fuel and natural gas, as well as on airline tickets.

The proposal was rejected by 51 per cent of the vote, Swiss public broadcaster SRF reported. However, local media said not all votes had been counted and the final result was not expected before late Sunday or Monday.

The climate proposal was one of several measures that Swiss voters cast their ballots nationwide on Sunday.

Critics of the proposal called it ineffective since Switzerland's carbon-dioxide emissions amount to a mere 0.1 per cent of the global tally.

Among other issues on the nationwide ballot was a referendum on the government's COVID-19 law, which was accepted. It will generate a surge in state spending.

Another initiative to improve the quality of drinking water in Switzerland was rejected -- it would have made it harder for farmers to get state subsidies if they use some types of pesticides and antibiotics. A ban on the use of pesticides was also rejected.