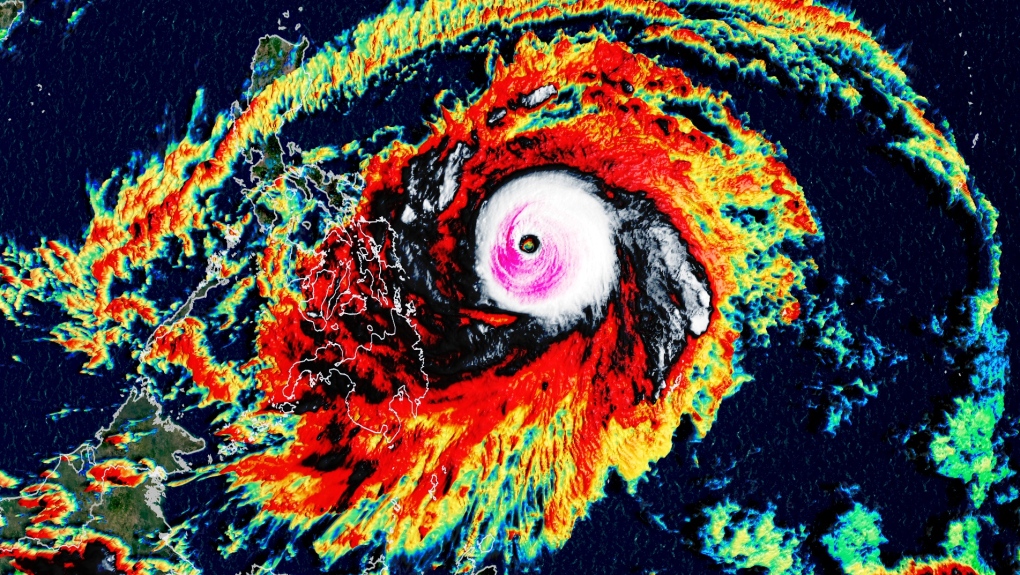 The first super typhoon of the season in the West Pacific is expected to come dangerously close to the Central Philippines this weekend. (Photo: CNN Weather)

The first super typhoon of the season in the West Pacific is closely approaching the Central Philippines this weekend.

Surigae is now the strongest typhoon on record for the month of April, surpassing Typhoon Maysak in 2015, among several others which had maximum sustained winds of 173 mph (278 km/h), according to the National Oceanic and Atmospheric Administration historical hurricane database.

The current track has Surigae maintaining this strength for at least the next 12 hours before weakening somewhat while passing 183 miles (295 kilometres) east of the Catanduanes region of the Philippines by late Sunday local time. Based on the closeness of Surigae to eastern sections of the Philippines, a signal 2 alert has been issued for parts of Luzon, Visayas, Northern Samar, Eastern Samar, Samar and Mindanao, according to the Philippine Atmospheric, Geophysical and Astronomical Services Administration (PAGASA).

This means winds over 37 mph and up to 75 mph (over 60 km/h and up to 120 km/h) are expected within the next 24 hours. Additionally, heavy rainfall is expected in these areas that could produce flooding, flash flooding and rain-induced landslides.

Super Typhoon Surigae has been slowly moving toward the Philippines since it developed earlier this week, yet rapidly intensified on Friday, and then again on Saturday. Rapid intensification occurs when a tropical cyclone strengthens 56 km/h in a 24-hour period.

This rapid intensification happened because of the ideal conditions for typhoon development: Wind shear, or the changing of wind speed and direction with height in the atmosphere, has been very low. High wind shear can tear storms like this to pieces, but low shear allows them to feed off the extremely warm waters and flourish into a powerful storm.

Continued low shear and excellent outflow will allow Surigae to thrive in the warm water that is running a few degrees above normal for this time of year.

FORECAST SHIFTS CLOSER TO THE PHILIPPINES

Earlier in the week, the projections for Surigae were to track to the west toward the Philippines before turning to the northwest and north, comfortably missing the Philippines to the east. However, over the past few days several weather forecast models showed a trend for the storm to track closer to the Central Philippines.

While most forecast models, as well as official forecasts from the Joint Typhoon Warning Center and the local authorities with PAGASA, show the center of Typhoon Surigae passing approximately 160 kilometres offshore of the Philippines on Saturday night and Sunday, the storm will pass close enough to bring significant impacts.

On this current trajectory, the strongest winds of over 100 mph (160 km/h) and the worst of the rainfall would remain offshore, but the storm would pass close enough to bring tropical storm-force winds (39-73 mph, 63-117 km/h) and four to eight inches (100-200 millimetres) of rain.

This rain and wind could be enough to cause localized flooding, minor property damage and power outages. PAGASA has already issued warnings as conditions are expected to deteriorate Sunday morning local time. If the westward trend continues, the impact will worsen and additional warnings will be issued.

Regardless of the exact track, a storm of this magnitude will generate giant surf and mariners in the region have been advised to use caution.

Even if Surigae remains offshore this weekend, it will need to be monitored into next week as it slowly moves to the northwest and north.

How much the storm curves will determine the impacts for northeastern portions of Luzon. Some weather forecast models show the storm also getting extremely close to this section of the Philippines coast by Tuesday and Wednesday, but other models and official forecasts continue to be farther offshore with limited impacts.