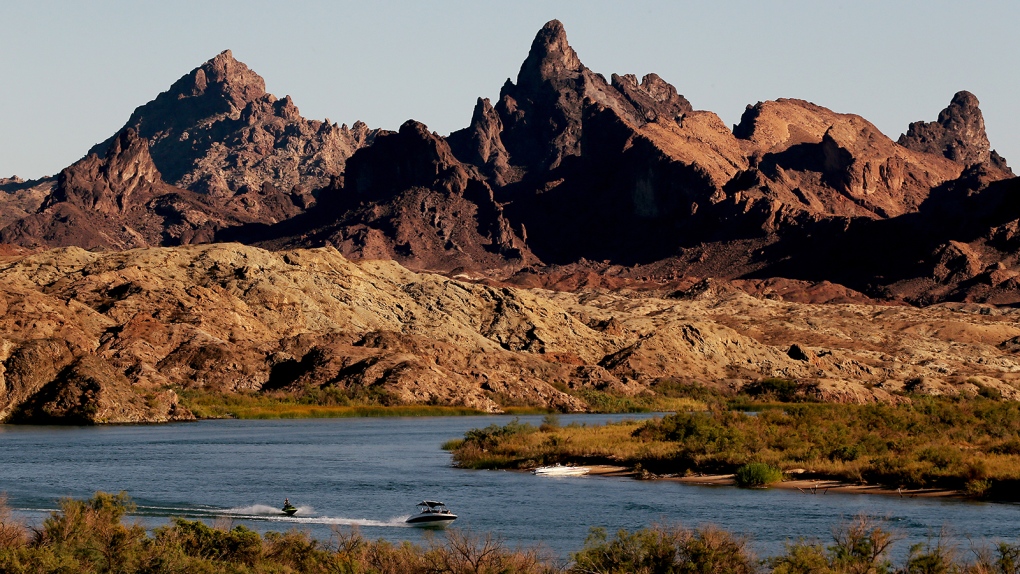 An extraordinary drought in the West is drying up the Colorado River and draining the nation's largest reservoirs -- Lake Mead and Lake Powell. And amid the overuse of the river and the aridification of the region, the federal government is preparing to make mandatory water cuts and asking states to devise a plan to save the river basin.

Two major announcements could come Tuesday. The first is a forecast from the U.S. Bureau of Reclamation that could trigger the first-ever Tier 2 water shortage for the Lower Colorado River Basin. The second is the bureau's next step in its demand that the seven states in the river basin come up with a way to voluntarily cut up to 25% of their water usage, or the federal government will do it for them.

It was just a year ago that the Department of Interior declared the first shortage on the Colorado River -- a Tier 1. But the past 12 months did not bring enough rain and snow. A report from July shows Lake Mead, which the agency uses to determine shortage conditions, is hovering around 1,040 feet above sea level, after having dropped 10 feet in just two, dry months.

The reservoir is at just 27% of its full capacity.

Tuesday's report, which will be released around 1 p.m. ET, is all but certain to show Lake Mead will be below 1,050 feet come January -- the threshold required to declare a Tier 2 shortage beginning in 2023. The question is how far below that threshold it will be. If the forecast is below 1,045 feet, which recent forecasts would suggest it will be, then mandatory water cuts will expand beyond Arizona, Nevada and Mexico and into California for the first time.

But the growing concern is that the mandatory cuts -- a system that was updated as recently as 2019 -- aren't enough to save the river in the face of a historic, climate change-driven drought. States, water managers and tribes are now back at the negotiating table to figure out how to solve the West's water crisis.

"We thought we were good, but the last few years have been so dry that we realized those tier reductions weren't enough and aren't enough," Bill Hasencamp, the Colorado River resources manager with the Metropolitan Water District of Southern California, told CNN. "So the two things we're focused on is how do we get through the next three years without the system crashing, and then how do we develop a long term plan to sustain the Colorado River."

'THERE'S ONLY SO MUCH WATER'

The Colorado River's water was divvied up among seven states in the West a century ago. The pact gave half of the river's water to the Upper Basin states (Colorado, Utah, Wyoming and New Mexico) and half to the Lower Basin (California, Arizona and Nevada). Mexico -- through which the river flows before it reaches the Gulf of California -- was also guaranteed an allotment.

There was one major problem: Having been written in the 1920s, at a time when precipitation was higher than normal, the pact overestimated how much water the Colorado River carries. It also did not account for the West's booming population growth and its hotter and drier future in the face of the climate crisis.

At a June Senate hearing, Bureau of Reclamation chief Camille Touton laid out a stark warning. In order to stabilize the Colorado River Basin, states and water districts must come up with a plan by August 15 to cut 2 to 4 million acre-feet of water usage by next year. (An acre-foot is the amount of water that would fill one acre a foot deep -- roughly 326,000 gallons.)

Touton's proposed cut is a massive amount -- the high end of the target is about 25% less water than states currently receive. And the low end of the target represents the vast majority of Arizona's yearly allotment of Colorado River water.

Touton also made clear in June that if the states cannot come up with a plan, the federal government will act.

But inter-state negotiations are not going well.

John Entsminger, the general manager for the Southern Nevada Water Authority, told CNN that so far not enough of the stakeholders have put forth proposals that would get the basin to Touton's target. He said he hopes the federal government proposes "some pretty strong measures" that could be acted on immediately.

"Frankly, I'm frustrated because the overwhelming sense I've gotten from the negotiations is there aren't enough people taking this seriously enough and understanding this is about adapting to less water in this river," Entsminger said.

Nevada has already moved to cut its metropolitan water usage, banning non-functional turf and paying people for years to remove water-intensive lawns, Entsminger said. But agriculture, which takes up a lot of the water from the river, must be part of the equation as well.

"You have to have a contribution from the sector that uses 80% of the water," he said. "That's not law, politics, it's just math."

Entsminger said other stakeholders that are hesitant to give up their water allotments need to accept a new reality: The river is running dry, and sacrifices must be made.

"It doesn't matter what can be agreed to because there's only so much water, and mother nature will figure this out at some point," he said. "At some point, there's just not water in the river channel."

The federal government has not often stepped in and taken control of water management plans from the states, but it has the authority to do so in the Lower Colorado River Basin -- which includes Arizona, southern Nevada and southern California. And experts told CNN the threat of federal action is something states will respond to.

"We kind of need the federal government to make some threats to spur action," John Fleck, a Western water expert and professor at the University of New Mexico, told CNN earlier this year. "Progress seems to happen when the federal government comes in and says to states, you need to do this or we're going to do something you don't like."

Members of Parliament will be holding an emergency debate in the House of Commons on Monday night, giving MPs a chance to discuss 'the urgent and escalating situation in Atlantic Canada' following the deadly and destructive post-tropical storm Fiona. And, Prime Minister Justin Trudeau is making plans to visit the regions impacted 'as soon as possible this week.'