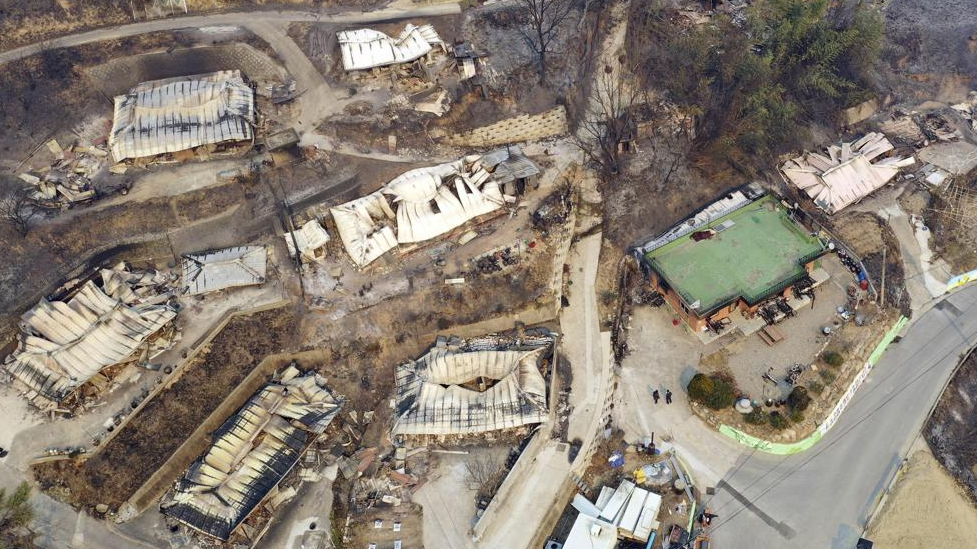 Homes damaged by a wildfire are seen in Uljin, South Korea, Saturday, March 5, 2022. South Korea was deploying nearly 2,000 firefighters and troops on Saturday to battle a large wildfire that tore through an eastern coastal area and temporarily threatened a nuclear power station and a liquified natural gas plant. (Kim Huyn-tae/Yonhap via AP)
SEOUL, South Korea -

Thousands of South Korean firefighters and troops were battling a large wildfire on Saturday that tore through an eastern coastal area and temporarily threatened a nuclear power station and a liquified natural gas plant.

The fire, which began Friday morning on a mountain in the seaside town of Uljin and has spread across more than 6,000 hectares (14,800 acres) to the nearby city of Samcheok, destroyed at least 159 homes and 46 other buildings and prompted the evacuation of more than 6,200 people.

Images from Uljin and Samcheok showed large swaths of white and gray smoke emerging from the slopes of mountains that cover the country's eastern coast and firefighters operating water hoses amid thick, smoky air.

There were no immediate reports of injuries or deaths.

Officials were investigating the cause of the blaze, which grew rapidly amid strong winds and dry conditions, South Korea's Ministry of the Interior and Safety said.

As of Saturday afternoon, around 7,000 firefighters, troops and public workers as well as 65 helicopters and 513 vehicles, were being deployed to contain the fire, which after reaching Samcheok was moving southward back toward Uljin, driven by wind.

Hundreds of firefighters worked overnight to successfully prevent the blaze from spreading to an LNG production facility in Samcheok, which is just north of Uljin.

President Moon Jae-in issued an alarm Friday afternoon as the fire reached the perimeter of a seaside nuclear power plant in Uljin, forcing the operator to reduce operations to 50 per cent and cut off some electricity lines as preventive measures.

Hundreds of firefighters were deployed to the plant and kept the blaze under control before winds drove it northward toward Samcheok.