Sharks have killed 7 people in Australia this year, the most since 1934 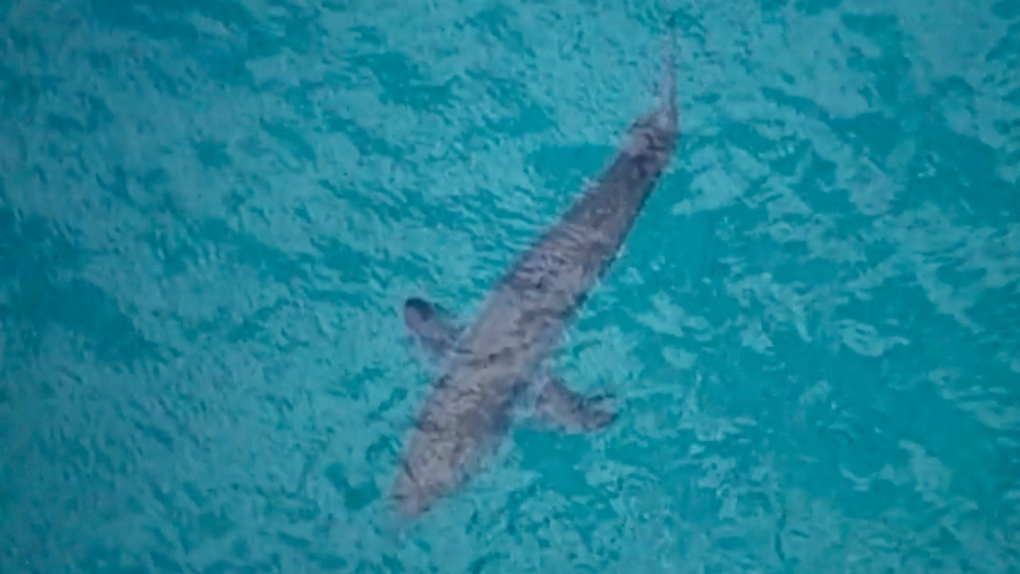 In this image made from aerial video, a shark swims along the coast of Kingscliff, New South Wales, Australia, Sunday, June 7, 2020. (ABC/CH7/CH9 via AP)

One morning in early October, a now-familiar scene unfolded on a beach in Western Australia.

A shark had attacked a surfer, who was missing. Authorities sent drones into the sky for aerial surveillance, emergency workers jumped onto boats to scour the area, and medics waited on shore.

Days of searching uncovered the man's surfboard, but his body was never found. He was counted as Australia's seventh shark attack victim this year -- an alarming spike that hasn't been seen in the country for 86 years.

This year's attacks have taken place in a number of different states, including Queensland and New South Wales. Among them is a diver who also went missing in January after a suspected great white attack. His body was never found.

To put this year's spike into perspective, there were no shark attack deaths in Australia in 2019. The years before that only saw one or two deaths annually. The last time the country had seven shark attack deaths a year was 1934, according to a spokesperson from the Taronga Conservation Society Australia. The highest annual figure on record dates back to 1929, with nine deaths.

"In Australia, (this year is) a bit of a blip," said Culum Brown, a professor at Macquarie University's Department of Biological Sciences in Sydney. "And in fact the long-term average is one -- one fatality per year. So seven is a long way above that, there's no doubt."

That average of one death per year has stayed stable for the past 50 years, the Taronga spokesperson said.

It's not that there has been a sharp increase in shark attacks in Australia overall -- there have been 21 shark incidents this year, which is normal and consistent with previous years. The difference is in the fatality rate.

There are a number of possible explanations -- several experts have pointed out that year-by-year figures always fluctuate, and this could be simple bad luck. But there's another possible culprit: the climate crisis.

As oceans heat up, entire ecosystems are being destroyed and forced to adapt. Fish are migrating where they've never gone before. Species' behaviours are changing. And, as the marine world transforms, sharks are following their prey and moving closer to shores popular with humans.

A HOTSPOT FOR GLOBAL WARMING

On land, Australia's climate crisis has led to raging bush fires, extreme heatwaves, and one of the worst droughts on record.

But it has also slammed the oceans with acidification and rising temperatures, which can wreak havoc on entire ecosystems. In particular, Australia's southeast region is on the front lines of the climate crisis -- near-surface waters there are warming at about four times the global average.

The Great Barrier Reef, a vital marine ecosystem along the east coast, has experienced such widespread repeated bleaching that more than half the coral on the reef are dead. Massive stretches of mangrove forests have also died in the past decade.

"Those two ecosystems alone are responsible for a massive diversity in marine ecosystems -- so you're seeing huge ecosystems disappearing and/or moving," Brown said.

This all means that animals are migrating further south than normal in search of a suitable environment. Species like yellowtail kingfish, which are typically seen in northern tropical waters, are appearing in droves near the southern island state of Tasmania. The common Sydney octopus has shifted from the northeastern state of Queensland down to Tasmania. Even plankton and plant life like kelp are moving south.

These types of "marine tropical vagrants" often travel up and down the coastline, Brown said, riding the Eastern Australian Current famously depicted in the movie "Finding Nemo." But now, climate change means winters are warm enough for these fish to survive the season -- so some species are choosing to permanently stay in the southern waters.

"I spend a lot of time in boats off the coast and this year I don't remember a year where I've seen so many bait fish aggregations so close to the coast," Brown said. Researchers still aren't exactly sure what drives the movement of many of these species -- but Brown added, "there's no doubt the sharks are just responding to where the bait fish are."

The ocean is by no means a stagnant mass; the surging currents mean there are areas of warm and cold water. The Eastern Australian Current is a major player in this dynamic -- it has also grown much stronger in recent decades, meaning it's pumping more warm tropical water down the coast.

But because the current is more intense, it's also pushing cold nutrient-rich water toward some eastern shores.

These dynamic, shifting water temperatures are perhaps also why sharks are beginning to move into human spaces. Some species, like bull sharks, like warm water -- so they're spending more time in the warm southern waters, said Robert Harcourt, a researcher of shark ecology and director of Macquarie's marine predator research group.

Meanwhile, species like great whites that prefer lower temperatures are drawn closer to shores where pockets of cold water also hold abundant prey. Tiger sharks, too, are typically found further north -- but have ventured down as far as Sydney, likely also affected by the current.

These three species -- bull, great white, and tiger sharks -- are responsible for most of Australia's shark attack deaths.

"I would foresee that there's going to be greater movement, an increase in geographic range, in a lot of these species," Harcourt said. "That's because the dynamics of climate change mean their suitable habitat in terms of water temperature and prey distribution is changing as well. And these animals are large, far-ranging apex predators."

"They will potentially come more in contact with people, and at the same time, human use of the ocean is increasing all the time," he added.

Modern technology, improved medical care, and faster emergency response times mean the fatality rate of shark attacks has dropped significantly in the past decade -- which is why this year's spike is "a real anomaly," Harcourt said.

But climate change aside, there might also be other factors at play. Luck is a major one: there have been several close calls in recent years where the victim was saved because there happened to be a medical worker close by at that time, said Brown.

"We managed to save several people over the last couple of years, just by the fortune of having somebody qualified on site to deal with the trauma immediately, and that makes a massive difference," he added.

It also depends where the victim is bitten. "One centimetre to the left, if you get bitten on the leg, and you can die in seconds or minutes at least," said Harcourt. "You know, one centimeter to the right, you get a terrible scar and a lot of pain but if you don't go into shock you've got a good chance of survival."

There's also a chance people are just spending more time in the water this year due to work-from-home conditions during the COVID-19 pandemic, or because it's been particularly hot in Australia lately, Harcourt said -- thus raising the chances they could run into a shark.

A NEW ERA OF UNPREDICTABILITY

Brown and Harcourt cautioned that the 2020 fatality rate of shark attacks is only based on a single year's data; given shark figures can fluctuate year by year, it's difficult to say whether climate change is directly causing this year's spike. It could be a simple matter of bad luck; we just can't know until a few years down the line, when there is enough data to determine if it is a trend or an outlier.

But both experts agreed on one thing: the ocean is changing, and sharks are changing with it. Climate change has devastated the world's natural environments and thrown everything off balance, disrupting how marine ecosystems live, move, and potentially interact with humans.

"You can't draw any conclusions about anything based on (just one year), but there's no doubt that we're moving into a period of the unknown, effectively," Brown said.

"All the old distributions of species and how we interact with them -- you can pretty much throw that out the window. Whatever coming in the future is going to be new."