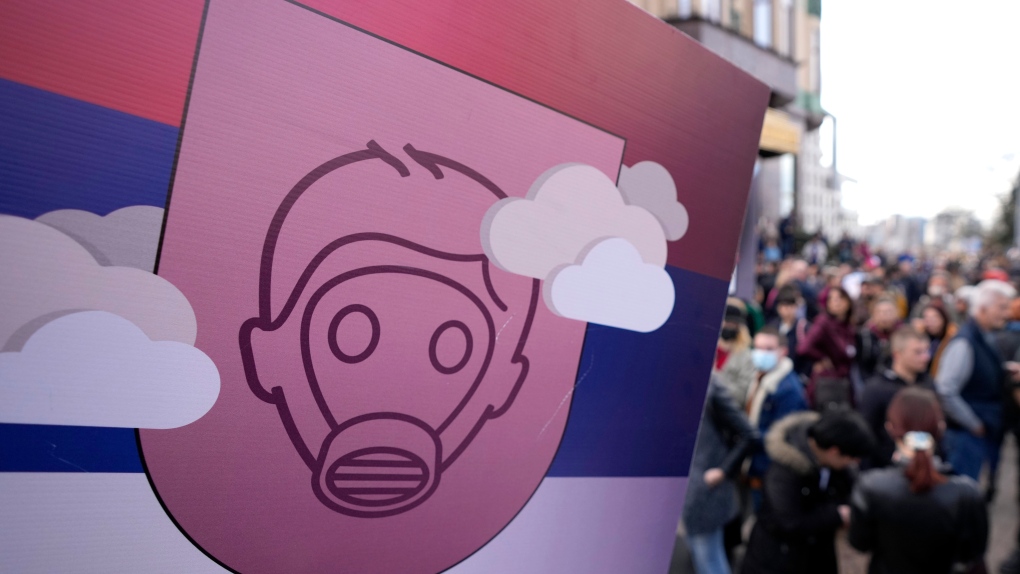 A man holds a banner during a protest for clean air in Belgrade, Serbia on Nov. 28, 2021. (AP Photo/Darko Vojinovic)

BELGRADE, SERBIA -- Several thousand people rallied in Belgrade on Sunday in another environmental protest, a day after demonstrators blocked bridges and roads in different parts of Serbia and scuffled with riot police who formed cordons to try to stop them.

The rally on Sunday was called in protest at alarming levels of air pollution in Serbia produced by coal-fueled power plants, lack of proper air-filtering protection in mines and factories, old cars and bad fuel for home heating.

The protesters, carrying banners reading "The Air Is Dangerous" and "You Are Suffocating Us," marched through downtown Belgrade, blowing whistles and chanting anti-government slogans.

"We don't have to measure the pollution, we can see it and feel it," said Bojan Simisic, from the Eko Straza, or the Eco Guard, the environmental group that is behind the protest. "It is killing our children, I don't want my children to be forced to flee the country because of the pollution."

Serbia is one of the most polluted states in Europe, but public protests have gained attention only recently, with activists accusing the populist authorities of allowing foreign investors mostly from China to further hurt the Balkan nation's environment.

On Saturday, thousands of protesters blocked a key traffic artery in Belgrade and in other towns, angered over two laws they say would pave the way for such projects.

The hour-long blockade on Saturday led to skirmishes and organizers said a number of protesters were detained. In the western town of Sabac, a video emerged on social networks of unidentified thugs beating protesters with batons.

Western Serbia has been at the centre of the ecological movement because of a bid by Rio Tinto excavation company to open a lithium mine in the area. The company has said it would meet the highest ecological standards, but activists and experts insist the mine would destroy farmland, animal life and rivers.

Serbia's autocratic President Aleksandar Vucic and his populist government have dismissed the environmental protests as political. They have promised to tackle Serbia's huge ecological problems that have piled up after decades of neglect, but stressed that they have no intention of stopping coal mining any time soon.

Vucic's government is formally seeking European Union entry, but he has instead forged close ties with Russia and China. A number of major Chinese investments, such as the purchase of a large copper and gold mine and the country's only steel mill, have considerably increased CO2 emissions in the country, environmentalists say.