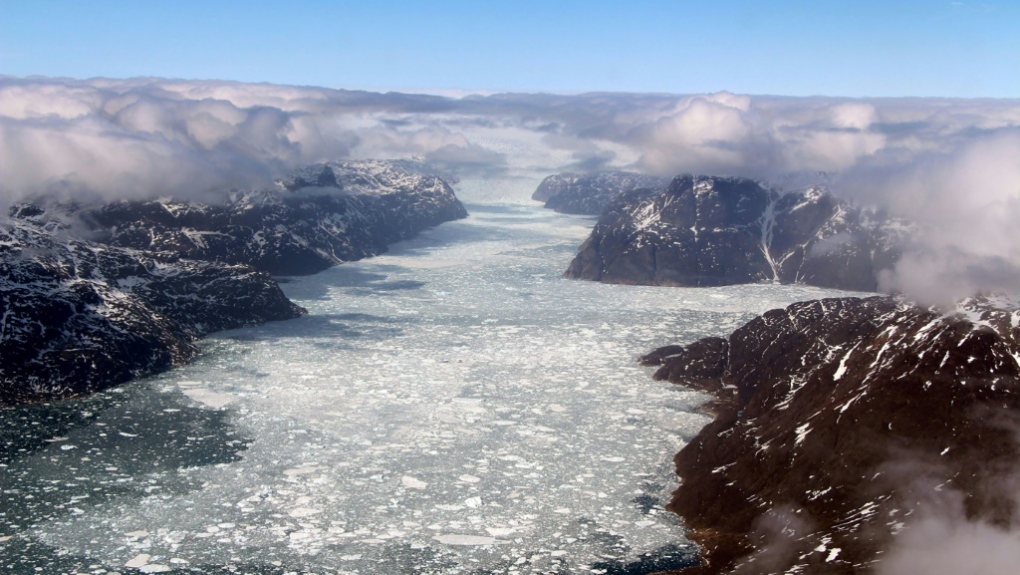 If greenhouse gas emissions continue unabated, the Greenland ice sheet will shed some 36 trillion tonnes of mass from 2000 to 2100, enough to lift the global ocean waterline by 10 centimetres, according to a new study. (AFP)

PARIS -- Ice loss from Greenland's massive ice sheet will cause sea levels to rise more during the 21st century than they have during any 100-year period in the last 12,000 years, even if global warming is held in check, scientists said Wednesday.

The study -- based on ice core data and models and published in the journal Nature -- is the first to painstakingly reconstruct Greenland's ice loss record over the entire course of the Holocene, the geological epoch that has allowed civilization to flourish.

It found that if greenhouse gas emissions continue unabated, the kilometres-thick ice block will shed some 36 trillion tonnes of mass from 2000 to 2100, enough to lift the global ocean waterline by 10 centimetres.

Until the late 1990s, Greenland's ice sheet was roughly in balance, gaining as much mass through snowfall as it lost in summer from crumbling glaciers and melt-off.

But accelerating climate change has destroyed that balance, with the net loss flowing into the North Atlantic.

If it were to pass a temperature "tipping point" into irreversible decline -- a threshold that could be as low as 2 C above preindustrial levels -- the ice sheet would likely take thousands of years to melt away, scientists say.

But even in the short term, increases in sea level measured in tens of centimetres will devastate coastal communities around the world.

Areas currently home to 300 million people -- mostly in poorer nations -- will be vulnerable by 2050 to regular flooding from storm surges, earlier research has shown.

Last year, Greenland cast off more than 500 billion tonnes of ice and meltwater -- 40 per cent of total sea level rise in 2019 and the most in a single year since satellite records began in 1978.

Unless humanity dramatically ratchets down the carbon pollution caused by burning fossil fuels, such levels could become the "new normal", said lead author Jason Briner, a professor of geology at the University of Buffalo in New York.

"No matter what the future carbon emissions are going to be, the Greenland ice sheet will lose more ice this century than even during the warmest of times during the past 12,000 years," he told AFP.

"But it also gives me hope to know that humanity has a say in the future of Greenland and global sea levels."

The 12,000-year timeline makes it possible to better separate natural fluctuations in the ice block's mass balance with the impact of manmade climate change.

Capping global warming at under 2 C -- the cornerstone target of the 2015 Paris Agreement -- would limit Greenland's contribution to sea level rise at about two centimetres this century, the study found.

But under any scenario, the ocean waterline will continue to rise in the 22nd century and beyond.

"No doubt we will see impactful sea level rise this century," Briner said. "But without a course correction now, the next century's sea level rise could be life-changing for much of the globe."

Until 2000, the main driver of sea level rise was melting glaciers and the expansion of ocean water as it warms.

But over the last two decades, the world's ice sheets atop Greenland and Antarctica have become the single largest source of sea level rise.

The UN's climate science advisory panel, the IPCC, has forecast sea level rise from all sources of just under a metre by century's end.