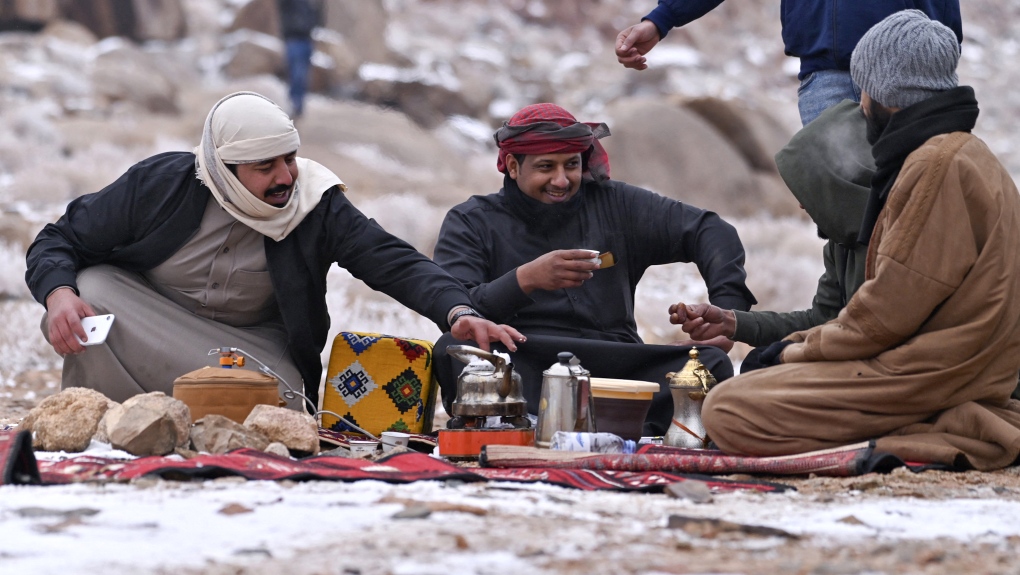 Several recent snow and hailstorms in the region have transformed landscapes in and around Saudi Arabia, stirring excitement among locals and causing a sensation on social media, and pictured, Saudis melt snow for coffee in Jabal al-Lawz near Tabuk. (Ibrahim Assiri/AFP/Getty Images/CNN)

For most people, thinking about the Saudi Arabian desert probably conjures up images of sand dunes baked by relentless sunshine.

More recently, however, those sands have been covered in snow.

Several recent snow and hailstorms in the region have transformed landscapes in and around Saudi Arabia, stirring excitement among locals and causing a sensation on social media.

Al-Harbi told CNN that winter weather of such intensity in the Badr desert area was a rare phenomenon that had not occurred for years. He described it as a "historic hailstorm."

The Saudi photographer, who documented the scenes on January 11, said the site was teeming with visitors, many who had traveled miles for a glimpse of the frozen landscape.

At the time of Al-Harbi's visit, Saudi Arabia's National Center of Meteorology had forecast moderate to heavy rain in the Medina region, along with winds, low visibility and hail, according to the Saudi Press Agency.

Wintry conditions were experienced again this week, when snow fell in northwestern Saudi Arabia, covering the city of Tabuk, near the border with Jordan, and nearby mountains, according to Reuters.