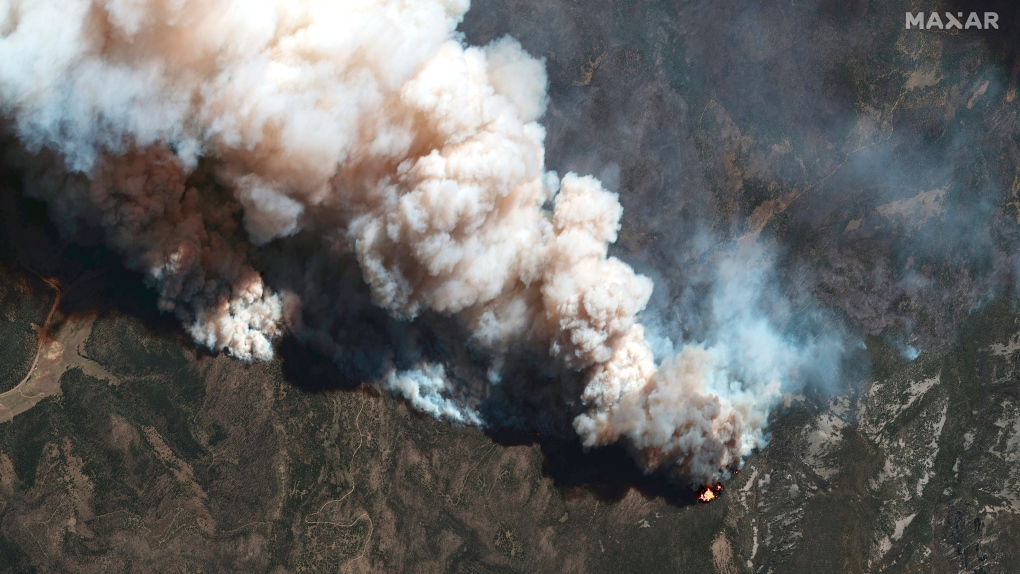 Lightning sparked a few new small fires in the drought-stricken Southwest Monday but the thunderstorms brought welcome rain to the monster blaze that's been churning for a month in New Mexico and is now the state's largest in recorded history.

"We haven't seen rain in a really long time so that's exciting," San Miguel County Sheriff Chris Lopez said Monday might at a briefing on the biggest active fire in the U.S. burning east of Santa Fe.

"It gave us a little bit of a breather," he said at one of the command posts in Las Vegas, New Mexico, on the southeast flank of the blaze that's charred 465 square miles (1,204 square kilometres).

More than 2,000 fire personnel remain on the lines in the Sangre de Cristo mountain range south of Taos. The fire now covers an area nearly one-quarter the size of Delaware.

More than 260 homes have burned and more evacuations were prompted over the weekend as the blaze moved through dry -- and in some cases dead -- stands of pine and fir trees. Huge columns of smoke could be seen from miles away, and fire officials and weather forecasts continue to refer to it as an unprecedented situation.

Richard Nieto, wildland fire manager officer for the Los Alamos National Laboratory, said Monday night authorities were preparing to relax the status of evacuation alerts as crews were pushing back the flames about 3 miles (5 km) southwest of the lab's federal boundary.

New lightning-sparked fires Monday included one about 2.5 miles (4 km) from Sedona, Arizona, but fire officials said Monday night it had burned less than an acre and the growth potential was low.

Forecasters said the weather will remain unstable throughout the week with shifting winds and rising humidity. But crews should enjoy at least another day of more favorable fire conditions.

It should be a "good work day for the crews," fire behavior specialist Stewart Turner said Monday night. "Not suspecting big growth at all."

Monday's reprieve allowed ground crews to move into position to capitalize on retardant drops from airtankers and water spilled from helicopter buckets to expand contingency plans for back-up fire lines in the days ahead farther south of Santa Fe and to the northeast toward the Colorado line.

"We're trying to think bigger box, bigger picture," Nickie Johnny, an incident commander from California who is helping with the fire, said about efforts to find places miles ahead of the flames where crews can cut fire lines and mount a defense.

Fires also were burning elsewhere in New Mexico and in Colorado as much of the West has marked a notably hot, dry and windy spring. Predictions for the rest of the season do not bode well, with drought and warmer weather brought on by climate change worsening wildfire danger.

Colorado Springs enacted a fire ban after a series of fires have spread quickly due to hot and dry conditions, including a fatal one caused by smoking. Under a ban taking effect Monday, smoking and grilling will be prohibited in parks in Colorado's second-largest city and people grilling at home will be allowed to use only gas or liquid fuel, not charcoal or wood.

Burn bans and fire restrictions also have been put in place in cities and counties around New Mexico in recent weeks, with officials warning that any new fire starts would further stress firefighting resources.

Nationwide, about 2,030 square miles (5,258 square kilometres) have burned so far this year -- the most at this point since 2018, according to the National Interagency Fire Center.