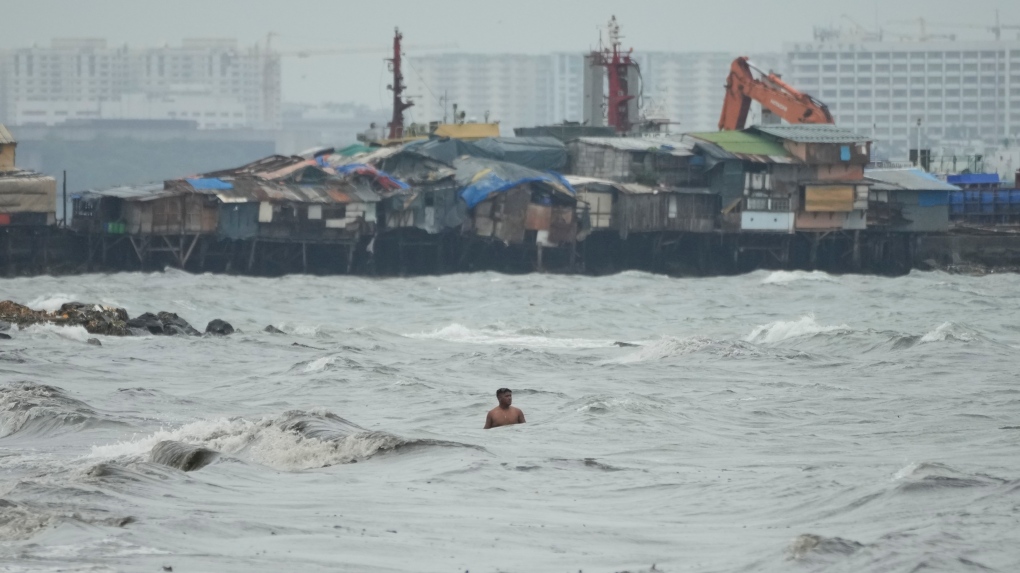 A resident swims along strong waves as Typhoon Noru approaches the seaside slum district of Tondo in Manila, Philippines on Sept. 25, 2022. The powerful typhoon shifted and abruptly gained strength in an "explosive intensification" Sunday as it blew closer to the northeastern Philippines, prompting evacuations from high-risk villages and even the capital, which could be sideswiped by the storm, officials said. (AP Photo/Aaron Favila)
MANILA, Philippines -

A powerful typhoon slammed into the northeastern Philippines on Sunday and was barreling across the main Luzon island toward the capital in a densely populated path where thousands have been evacuated to safety.

With sustained winds of 195 kilometres (121 miles per hour) and gusts of up to 240 km/h (149 m.p.h.), it was expected to weaken slightly when it hits the Sierra Madre mountain range but will remain dangerously ferocious, forecasters said.

"The typhoon is strong and we live by the sea," said Marilen Yubatan, who left her shanty in Manila with her two young daughters. "If we fall into the water, I don't know where I will end up with my children."

The typhoon gained considerable strength from a storm with sustained winds of 85 km/h (53 m.p.h.) on Saturday into a super typhoon just 24 hours later in an "explosive intensification" over the open sea, Vicente Malano, who heads the country's weather agency, told The Associated Press.

Thousands of villagers were evacuated -- some forcibly -- from the typhoon's path, as well as from mountainside villages prone to landslides and flash floods. Coastal communities could be hit by tidal surges as high as three metres (about 10 feet) in Quezon province, including Polillo island and nearby Aurora province.

"The combined effects of storm surge and high waves breaking along the coast may cause life-threatening and damaging inundation or flooding," the weather agency warned.

In Manila's seaside slum district of Tondo, some residents left their homes with bags of belongings and hurriedly walked to a nearby evacuation centre as the sky darkened and rains started to fall.

Melchor Avenilla Jr., who heads Quezon's disaster-response office, said law enforcers were under orders to forcibly move people who refuse to leave their homes. "But so far we've been able to do this by just appealing to people," Avenilla told AP by phone.

Several provinces and cities, including the densely populated capital Manila, suspended classes and government work Sunday and Monday. The typhoon's eye could pass about 40 to 50 kilometres (25 to 30 miles) from metropolitan Manila, "which is nearly a direct hit," Malano said.

Fishing boats and inter-island and cargo ferries were restricted to port as a precaution, the coast guard said, stranding cargo trucks and more than 2,500 passengers. More than 30 flights at Manila's airport, mostly bound for domestic destinations, were cancelled.

The typhoon is forecast to sweep through the main Luzon Island overnight and into the South China Sea on Monday. It's on track to hit Vietnam later in the week still maintaining its powerful winds.

About 20 storms and typhoons batter the Philippines each year. The archipelago also lies in the "Pacific Ring of Fire," a region along most of the Pacific Ocean rim where many volcanic eruptions and earthquakes occur, making the Southeast Asian nation one of the world's most disaster-prone.

In 2013, Typhoon Haiyan, one of the strongest recorded tropical cyclones in the world, left more than 7,300 people dead or missing, flattened entire villages, swept ships inland and displaced more than five million in the central Philippines -- well to the south of Noru's path.

The Canadian men’s national team returns to the FIFA World Cup pitch on Sunday to face Croatia, where they must pick up at least one point or risk elimination. CTVNews.ca will follow the match live.

Canada must secure at least one point against Croatia to stay alive in the tournament and four-time champion Germany looks to rebound against Spain. Earlier, Morocco beat Belgium and Costa Rica defeated Japan.

Protests against China's strict 'zero-COVID' policies resurfaced in Shanghai and Beijing on Sunday afternoon, continuing a round of demonstrations that have spread across the country since a deadly apartment fire in the northwestern city of Urumqi led to questions over such rigid anti-virus measures.