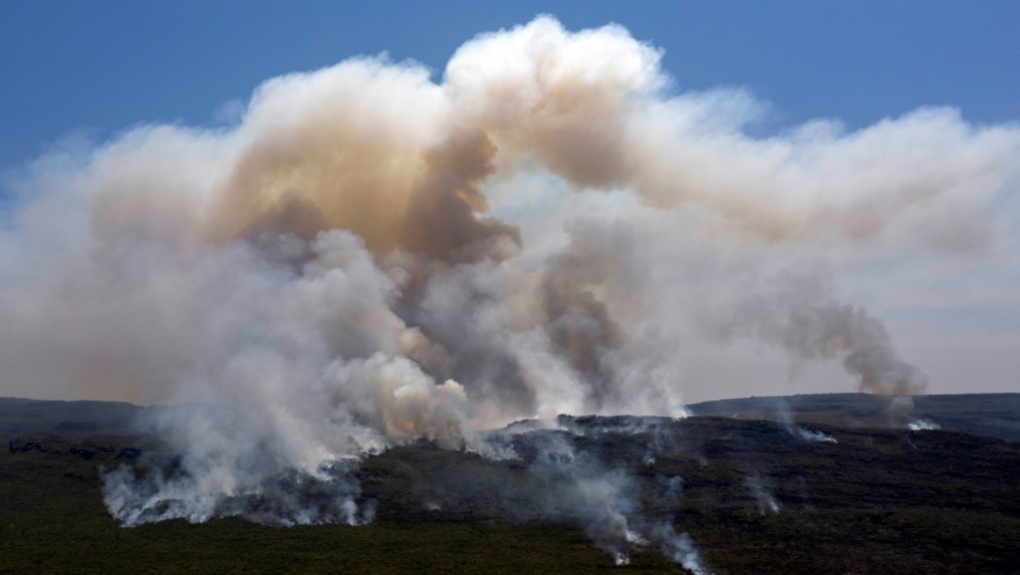 As Earth continues to heat due to ever higher concentrations of greenhouse gases in its atmosphere, both the number of fires and how fiercely and long they burn for increases. (AFP)

PARIS, FRANCE -- Stronger and more frequent wildfires are reducing forests' ability to store carbon in a trend that will likely not be offset by planting new trees, a study said Thursday.

As Earth continues to heat due to ever higher concentrations of greenhouse gases in its atmosphere, both the number of fires, as well as how fiercely and long they burn, increases.

Slower-growing tree species are better at surviving such intense blazes, but they capture less atmospheric carbon and reduce nutrient availability, according to research led by the University of Cambridge.

Analyzing decades of data on the impact of fires on ecosystems across the world, the team of experts found that repeated fires were driving long-term changes in forest composition, while reducing their population size.

They found that after 50 years, regions with the most extreme annual fires had 72 per cent less biomass than regions that had not burned.

Writing in the journal Nature Ecology and Evolution, the researchers said there were 63 per cent fewer trees in hard-hit regions compared to areas untouched by fires.

Because not all areas are suitable for mass reforestation, and because the long-term impact of fires take decades to gauge, the team said simply replanting the trees would likely fail to offset the reduction in forests' capacity to absorb carbon from the atmosphere.

"Planting trees in areas where trees grow rapidly is widely promoted as a way to mitigate climate change," said Adam Pellegrini in the University of Cambridge's Department of Plant Sciences.

"But to be sustainable, plans must consider the possibility of changes in fire frequency and intensity over the longer term."

Wildfires themselves are a major source of planet-warming carbon pollution, with annual blazes releasing CO2 equivalent to around a fifth of fossil fuel emissions.

But they also reduce nature's capacity to absorb the carbon pumped into the atmosphere.

Previous research has shown that frequent fires reduce the levels of soil nutrients such as nitrogen.

Thursday's study showed that this favours slower growing tree species that have adapted to surviving with fewer nutrients.

These species limit the forest's ability to recover as they hold on to nutrients rather than replenishing the soil as they grow.

Throughout human history, forests have maintained the ability to suck carbon from the atmosphere, proving a key line of defence against climate change.

But with relentless emissions growth, they are losing their capacity to do so.

One study from last year suggested that major forests such as the Amazon may soon tip over from being a carbon sink -- i.e. they absorb more carbon than they release -- to a source, perhaps within 15 years.

"As fire frequency and intensity increases because of climate change, the structure and functioning of forest ecosystems are going to change in so many ways because of changes in tree composition," said Pellegrini.