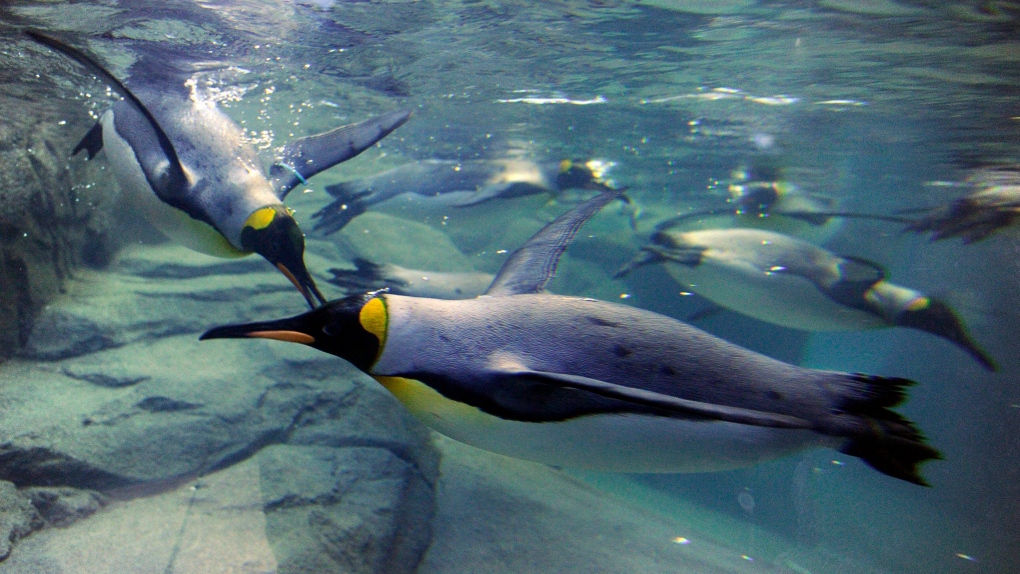 FILE - King penguins swim during opening day of the Penguin Plunge exhibit at the Calgary Zoo in Calgary, Alberta on Friday, Feb. 17, 2012. THE CANADIAN PRESS/Larry MacDougal

TORONTO -- Belgian wildlife photographer Yves Adams was in the midst of a two-month expedition in the South Atlantic when he encountered something he had never seen before: a yellow-coloured penguin among a colony of 120,000 king penguins.

Adams shared his encounter with the canary-yellow penguin on Instagram Thursday, garnering thousands of likes.

“Winning nature’s lottery with seeing the most beautiful King penguin and being able to take pictures,” Adams wrote.

The rare bird was spotted while Adams and his crew were unloading safety equipment and food onto Salisbury Plain, an island in South Georgia. What happened to him next occurred only by a stroke of luck.

“While unpacking our rubber boats merely after landing on a remote beach on the island of South-Georgia, this leucistic king penguin walked up straight to our direction in the middle of a chaos full of sea elephants and Antarctic fur seals, and thousands of other King penguins,” Adams wrote.

The photographer was fortunate enough that the bright-coloured penguin landed on the beach close his crew, making itself visible enough for an unobstructed photo amid a chaotic mix of tuxedoed penguins and seals.

Adams’ photographs show the creamy-coloured bird swimming on its stomach and waddling on the shore next to its black-and-white counterparts.

“Yesterday the press picked up these pictures, and the phone hasn’t stopped ringing since then...it seems we are in desperate need for some mellow yellow news,” he wrote.

While Adams photographed the bird in December of 2019, it took him over a year to release the photos because of the demands of his exhibition.