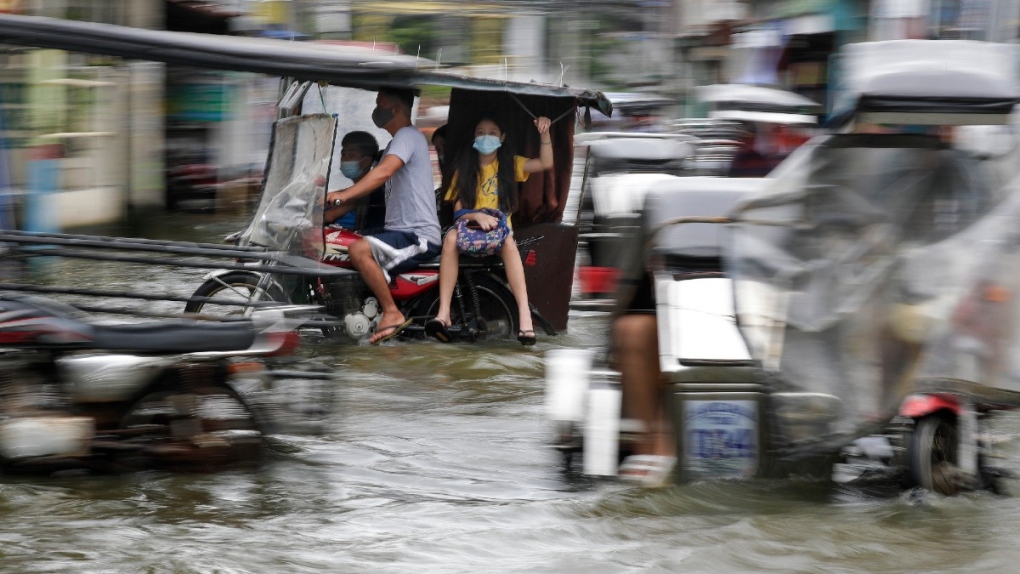 Residents wearing masks to prevent the spread of the coronavirus ride motorcycles as they negotiate a flooded road due to Typhoon Molave in Pampanga, Philippines, on Oct. 26, 2020. (Aaron Favila / AP)

MANILA, PHILIPPINES -- A strong typhoon blew out of the Philippines on Monday after displacing more than 120,000 people, leaving several fishermen missing and causing at least six vessels to sink or run aground in storm-tossed waters, officials said.

Local authorities reported at least two dead from Typhoon Molave, including a villager who drowned, but the government's main disaster-response agency said it would wait to include the deaths in its casualty count until after they are validated.

At least 13 people were initially reported missing, mostly fishermen, but five were later rescued separately off the eastern island province of Catanduanes, the Office of Civil Defence said.

The fast-moving typhoon blew out of the country to the South China Sea on Monday afternoon with sustained winds of 130 kilometres (81 miles) per hour and gusts of up to 160 kph (99 mph), forecasters said. It roared overnight across island provinces south of the capital, Manila, which was lashed by strong winds but escaped major damage.

More than 120,000 villagers fled to safety at the height of the typhoon's onslaught, with more than 75,000 taking shelter in hundreds of evacuation centres. The rest took cover in relatives' homes. Officials struggled to set people apart in emergency shelters due to the coronavirus pandemic.

Gov. Humerlito Dolor said despite widespread damage in his hard-hit province of Oriental Mindoro, no typhoon deaths were reported there. In one area alone, 200 families lost their fishing boats, Dolor said. Many villagers have started to leave emergency shelters to fix their battered homes, he said.

"Many of them lost their roofs, their walls and ceilings," he told DZMM radio.

Dozens of villagers were injured by falling trees and other storm debris as the typhoon pounded entire provinces, officials said.

The coast guard said four ships ran aground and two other boats, including a yacht, sank in very choppy waters off Batangas province, south of Manila. Coast guard personnel rescued seven crew from the yacht but were still searching for one other.

More than 1,800 cargo truck drivers, workers and passengers were stranded in ports after the coast guard barred ships and ferry boats from venturing into rough seas. Some of the ports were later reopened as the weather cleared.

About 20 typhoons and storms annually batter the Philippines, and the Southeast Asian archipelago is seismically active, with earthquakes and volcanic eruptions, making it one of the world's most disaster-prone countries.