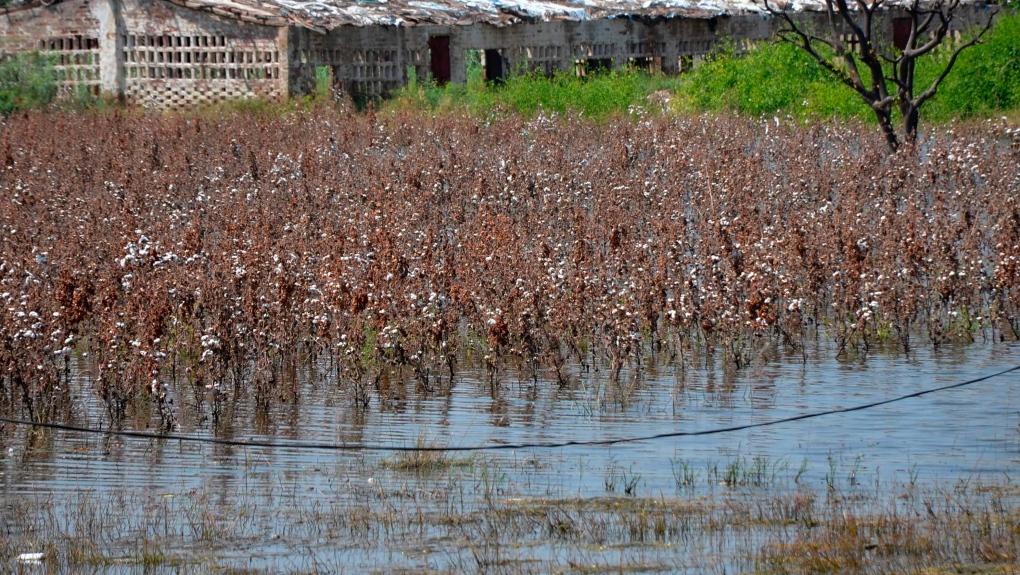 Pakistan's foreign minister on Thursday said that about 50% of the water has receded in the country's worst-hit southern Sindh province, raising hopes that farmers will be able to sow wheat in a first step toward returning to a normal life.

"We are utilizing all of our resources for draining the remaining water in flood-affected areas in Sindh," Bilawal Bhutto Zardari told a news conference. It was the first time that any official confirmed that the water had dropped 50% in Sindh, where 400, 000 people are living in relief camps or in tents.

Bhutto-Zardari's remarks were a sign of hope for hundreds of thousands of farmers who had been uncertain about the sowing of the upcoming wheat crop, which usually starts in October.

Nearly 15% of Pakistan's rice crop and 40% of its cotton crop were lost in this year's flooding, according to officials. The waters wiped out the personal grain stores that many farming families rely on for food year-round.

On Thursday, international aid agency Mercy Corps warned that the approaching cold weather of the winter would pose further threats to disaster-ravaged areas of the country, even as the floodwaters recede. In a statement, Farah Naureen, the agency's country director for Pakistan, said there was an urgent need for winterized tents and other items for survivors.

"We are thankful to the world community for helping us but we need more assistance," he told reporters in Karachi, the capital of his Sindh province, where 760 people died in floods and 350 survivors later lost life due to the outbreak of diseases.

The latest remarks of Bhutto-Zardari also came two days after the United Nations -- amid a surge in diseases in flood-hit areas of Pakistan -- raised its aid appeal for Pakistan to $816 million from $160 million, saying recent assessments pointed to the urgent need for long-term help lasting into next year.

Bhutto-Zardari said Pakistan has witnessed its worst-ever flooding because of climate change since June, although his country contributes less than 1% of global greenhouse gas emissions. August rainfall in the Sindh and southwestern Baluchistan provinces was eight and nearly seven times normal amounts, while Pakistan as a whole this summer had three-and-a-half times its normal rainfall.

Bhutto-Zardari criticized former Prime Minister Imran Khan for continuing anti-government rallies even during floods. "I cannot hold such rallies when my people are dying in the floods," he said.

Khan was ousted from power in April through no-confidence in the parliament.

But he says he was ousted under a U.S. plot, a charge Washington denies.

Bhutto-Zardari said Khan during his tenure strained Pakistan's ties with many countries, including Washington.

His remarks came after Khan vowed to march on Islamabad soon to force Prime Minister Shahbaz Sharif to hold snap elections which are due next year.

Bhutto-Zardari said Pakistan cannot afford to go to the elections when many areas are still submerged. He said Pakistan will first accomplish the task of helping people rebuild homes in flood-hit areas and return to their normal life.

"Elections will be held next year," he said, amid threats from Khan for a march on Islamabad.

Canada's transport minister says the federal government and the country's aviation sector are working on strengthening the passenger bill of rights following a summer plagued by delayed and cancelled flights.

Ontario passes housing bill despite criticism from municipalities over funding

Protests in Iran continue despite internet blackouts; Canadians respond with rallies of support

Nearly two months after the protests were first ignited, the people of Iran continue to march in the streets, despite increasing violence, internet blackouts and arrests, while Canadians support them overseas, organizing rallies in response.

Notable moments, political statements made in Week 1 of the World Cup

As much as the action on the pitch has captivated fans across the globe, the 2022 World Cup in Qatar has also made important headlines for incidents off the pitch.

Prime Minister Justin Trudeau visited Monday the graves of victims of a deadly stabbing rampage at a Saskatchewan First Nation before he was to meet with family members in private.