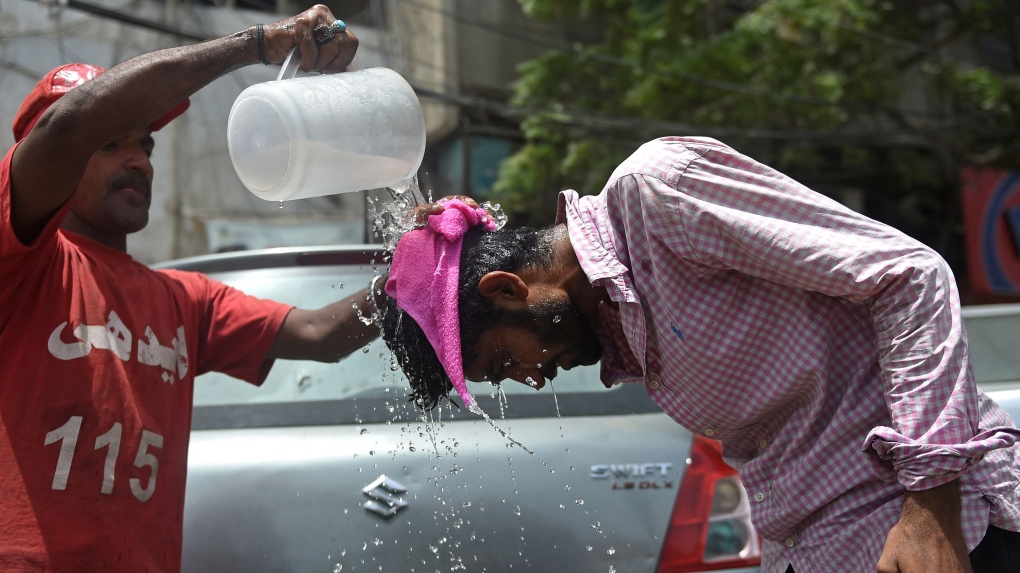 A deadly cholera outbreak linked to contaminated drinking water has infected thousands of people in central Pakistan as the country grapples with a water crisis exacerbated by a brutal heat wave in South Asia. (RIZWAN TABASSUM/AFP/Getty Images)

A deadly cholera outbreak linked to contaminated drinking water has infected thousands of people in central Pakistan as the country grapples with a water crisis exacerbated by a brutal heat wave in South Asia.

Temperatures in parts of Pakistan and India have reached record levels in recent weeks, putting the lives of millions at risk as the effects of the climate crisis are felt across the subcontinent.

Cholera cases were first identified in Pir Koh, a remote mountainous town in Balochistan province, on April 17. Since then, more than 2,000 people have been have been infected and six have died, according to Dr. Ahmed Baloch, from the health department of Balochistan.

Residents in Pir Koh say they have no access to clean drinking water. The lack of rain this year has caused nearby ponds to dry up, with their only source of water being a pipeline which had "rusted and contaminated the water supply," said local resident Hassan Bugti.

"Residents are forced to drink dirty water," he said.

Pakistan's Prime Minister Shehbaz Sharif has ordered "emergency relief measures" to curb the cholera outbreak in Pir Koh, and the military has been called in to help provide mobile water tanks to ensure clean drinking water gets to the population and set up medical camps to treat the sick.

Cholera is an acute diarrheal illness that kills thousands of people worldwide each year. It is easily transmitted, by consuming food or water contaminated with the fecal bacteria Vibrio cholerae. And scientists have warned of the severe impacts of climate change on human health, with rising temperatures encouraging the spread of dangerous pathogens such as cholera.

The outbreak comes as Pakistan faces a serious water crisis and an early onset heat wave that the Pakistan Meteorological Department said has been persistent across the nation since the start of the month.

The heat is unlikely to abate soon. While dust storms, gusty winds and scattered showers and thunderstorms brought relief to parts of the country over the past couple of days, temperatures are expected to ramp back up from Wednesday, according to the Pakistan Meteorological Department.

Pakistan's Minister for Climate Change Sherry Rehman on Monday said Pakistan was among the most water-stressed countries in the world and one of the ten most vulnerable to climate stress.

The country's major dams are at a "dead level right now, and sources of water are scarce as well as contested," Rehman told CNN, adding, "this is an all-encompassing existential crisis and must be taken seriously."

In the summer of 2015 a heatwave killed more than a thousand people in Pakistan's largest city, Karachi.

INDIA SUFFERS UNDER THE HEAT

The heat wave has also been felt by Pakistan's neighbour India, where temperatures in the capital region of Delhi surpassed 49 C (120 F) on Sunday.

In recent months India has experienced a severe heat wave that saw average maximum temperatures reach the highest in 122 years in northwest India in April, and countrywide in March.

The scorching heat breached the 49 C mark for the first time this year in Delhi, with temperatures reaching 49.2 C (120.5 F) at Delhi's Mungeshpur weather station and 49.1 C (120.3 F) at Najafgarh weather station on Sunday, according to the Indian Meteorological Department (IMD). New Delhi has suffered through 14 days in May above 40 C (104 F).

The IMD forecasts some relief for Delhi, with cloudy and clear skies for the next couple of days. However, it forecasts high temperatures to return in some parts of the region later in the week.

In some states, the heat has forced schools to close, damaged crops and put pressure on energy supplies, as officials warned residents to remain indoors and keep hydrated. On Saturday, India banned wheat exports -- days after saying it was targeting record shipments this year -- as the heat wave curtailed output and domestic prices hit a record high.

India often experiences heat waves during the summer months of May and June, but this year temperatures started rising in March and April.

India and Pakistan are among the countries expected to be worst affected by the climate crisis, according to the Intergovernmental Panel on Climate Change (IPCC). Experts say climate change is causing more frequent and longer heat waves, affecting more than a billion people across the two countries.

"This heat wave is definitely unprecedented," Singh said earlier this month. "We have seen a change in its intensity, its arrival time, and duration. This is what climate experts predicted and it will have cascading impacts on health."

The man charged Tuesday with seven counts of murder for opening fire at an Independence Day parade in suburban Chicago legally bought five weapons, including two high-powered rifles, despite authorities being called to his home twice in 2019 for threats of violence and suicide, police said.

The Canadian Armed Forces (CAF) has released further details about what will and won’t be allowed under its revised dress code expected to be enforced starting this fall.