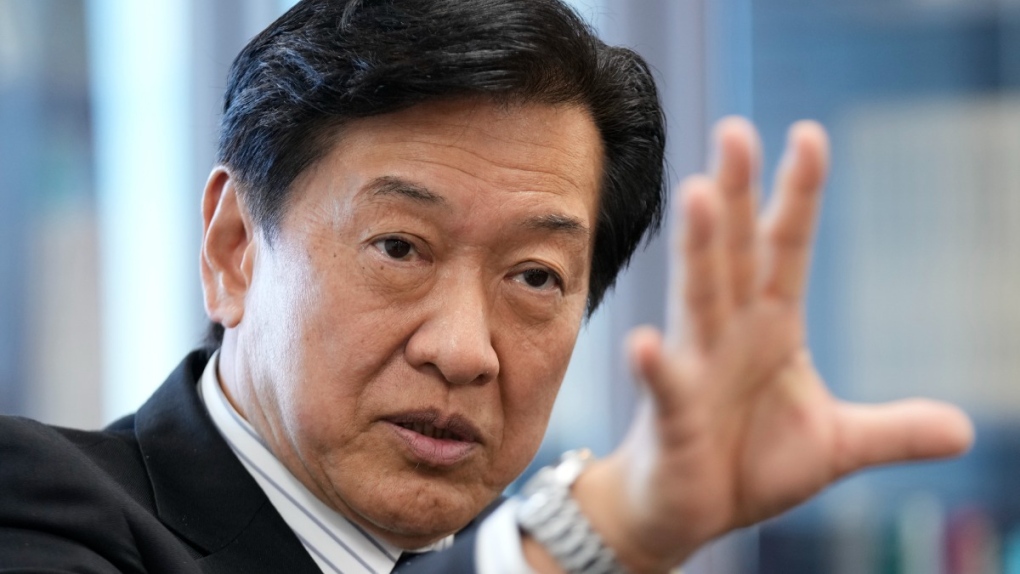 Yamaguchi said in an interview with The Associated Press that Japan hopes to lead a zero-emissions push in Asia and is preparing to introduce a carbon tax to meet its commitment to achieve carbon neutrality by 2050, creating stronger incentives to curb emissions.

"We cannot give details about what we will do with coal fired plants by 2030, but we will do our best to minimize emissions," Yamaguchi said.

Current efforts in Japan, the world's third-largest economy, are focused on developing methods to burn ammonia in conventional coal-fired plants and gradually phasing out use of coal possibly sometime in the 2040s.

Environmental groups and critics are urging Japan to focus more on promoting renewable energy, saying current policies will just prolong use of coal and hinder reductions in carbon emissions.

Critics also have accused Japan of promoting coal-fired plants in the past as part of its development assistance for many Asian countries.

Yamaguchi said Japan will speed up development of carbon capture, use and storage, or CCUS, technology as part of its support for other Asian nations.

Japan has been seen as reluctant to commit itself to banning coal power as soon as many European countries. At the COP-26 United Nation's climate summit held in Glasgow, Scotland, late last year, it was awarded the Fossil of the Day award by an environmental organization for its stance.

Japan relied more heavily on nuclear power before the 2011 triple disasters of earthquake, tsunami and meltdowns at the Fukushima Daiichi nuclear power plant, which led it to idle many reactors. Some were restarted after safety upgrades, but the country still uses more gas and coal than before to fuel its economy.

Energy experts and critics say Japan currently has overly ambitious targets for nuclear energy to supply 20-22% of its energy mix by 2030. By that time, the country has promised to cut emissions to 46% of 2013 levels.

Japan last year emitted about 1.15 billion tons of greenhouse gas, down 5.1% from the previous year and 18.4% below the 2013 level, according to the latest government data.

At the Glasgow summit, Prime Minister Fumio Kishida pledged to support cutbacks in carbon emissions by promoting use of ammonia, hydrogen and other innovative decarbonizing technologies. He did not say when Japan will end coal fired power generation.

While Japan is seen as dragging its feet in giving up coal, Yamaguchi said Tokyo should get credit for contributing to an agreement on market mechanisms -- a deal that supports the transfer of emission cuts between countries while also giving incentives to companies to invest in climate-friendly solutions.

Yamaguchi did not provide any specific details about the carbon tax or when it might be enacted. Carbon pricing measures under consideration include introduction of carbon taxes for companies and households, as well as emissions trading. The government has not announced a decision on the issue.

Kishida on Tuesday kicked off a government-commissioned "clean energy strategy" panel of experts and officials, asking its members to study carbon pricing and provide a plan by the summer.

The environment minister, a former diplomat who earned a doctoral degree in politics at Johns Hopkins University, said he is considering launching a framework for talks with 17 other nations on a joint carbon crediting mechanism to eventually cut emissions to zero, starting with phasing out coal-fired power plants.

Ideally, the forum would include all Asian-Pacific countries, Yamaguchi said.

"Environmental issues are borderless," he said.

The storm that moved across Ontario and Quebec Saturday is known as a “derecho”, a powerful kind of windstorm that is long lasting and far-reaching.

New York's highest court is set to determine whether Happy, a 47-year-old Asian elephant living at the Bronx Zoo, is being unlawfully imprisoned.

Meet the guy who wants to help save the planet with thousands of buoys, seaweed and giant antacids

Seaweed is a ravenous consumer of carbon dioxide, and scientists have been eyeing it as one potential solution to the climate crisis.