Oceans will lose oxygen for centuries, even if we stop CO2 emissions: study 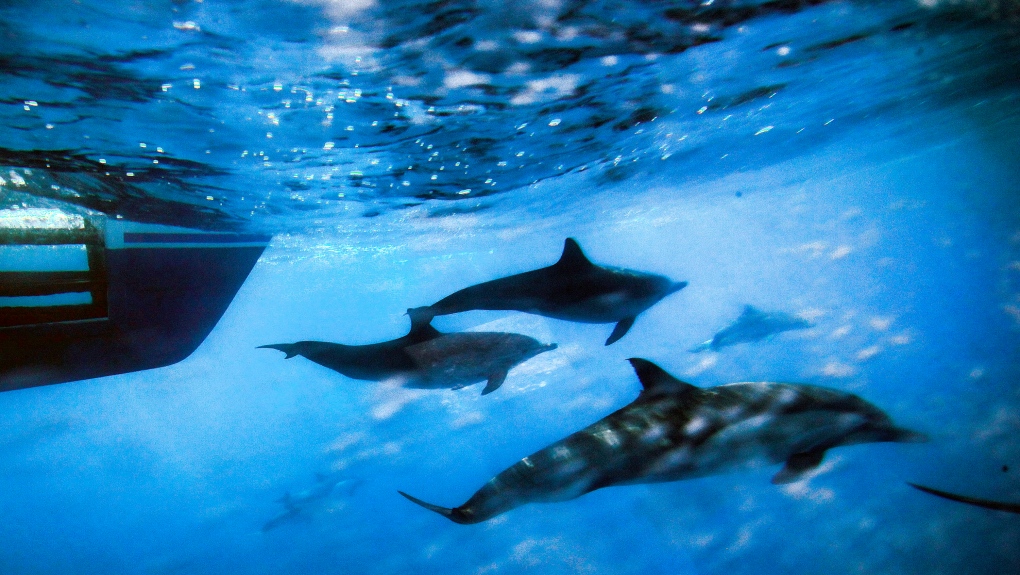 In this Oct. 15, 2014 file photo, dolphins swim along the side of a boat off the coast of San Pedro, Calif. (AP Photo/Richard Vogel)

TORONTO -- Earth’s oceans have been losing oxygen for decades due to global warming, and a new study suggests that these oceans will continue to do so for centuries, even if humans stopped all CO2 emissions immediately.

The research, published in the journal Nature Communications on Friday, used a model of the Earth if CO2 emissions had been ceased by the end of 2020 in order to simulate the marine ecosystem in the future.

"The results show that even in this extreme scenario, the oxygen depletion will continue for centuries, more than quadrupling the oxygen loss we have seen to date in the ocean,” Andreas Oschlies, a professor and head of the biogeochemical modelling research unit at GEOMAR Helmholtz Centre for Ocean Research Kiel in Germany, said in a press release.

The model looked forward until the year 2650 and included historical data on CO2 emissions dating back to 1765. Over the last 50 years, the ocean has lost around two per cent of its total oxygen, with some regions losing significantly more, the release stated.

Fish and other marine species such as zooplankton need the dissolved oxygen that exists in seawater to live. This oxygen enters the ocean largely through the atmosphere and allows fish to breathe.

Even the slightest amount of change in ocean gases can have a huge impact on the marine creatures that live there. The research stated that since species that live at different depths in the ocean have specifically “adapted to local oxygen conditions, any loss of oxygen is expected to reduce habitats of individual species.”

According to the model, the majority of the oxygen loss would occur in the deepest depths of the ocean, a landscape largely unknown to humans.

Around 80 per cent of the long-term decrease in oxygen will occur below 2,000 metres, the study found. There could be a decline in marine creatures by up to 25 per cent due to the loss of oxygen and ocean warming, particularly ones that live deeper in the ocean, the study suggested.

Marine environments capable of supporting species could decline by 10 to 25 per cent as well in the deep ocean between 2020 and 2650.

It’s unknown exactly how many fish, marine creatures and fauna this could impact.

This is a result of the emissions humans have created up to this point, the study said, and is something we can’t change, although the study notes that deep-ocean vents may help reverse some of this far in the future.

Oschlies suggests we perform comprehensive studies of these deep ocean ecosystems now, “before this environment, that is deemed as having been stable for many millennia, is likely to change significantly due to the now expected decrease in oxygen,” the release stated.

Not all is lost, however. The surface layer of the ocean would almost completely cease deoxygenation if we were able to stop CO2 emissions quickly, the study found.

“This indicates that rapid emission reduction can halt the increasing threat of deoxygenation in the upper ocean that holds much of the known biodiversity and provides the main ocean ecosystem services deemed societally relevant,” the research stated.

Researchers also ran a simulation looking at what would occur if emissions remained high until the year 2100, and decreased until 2300. In this scenario, they found, “the marine oxygen loss will be even 2.5 times higher until year 2650.”