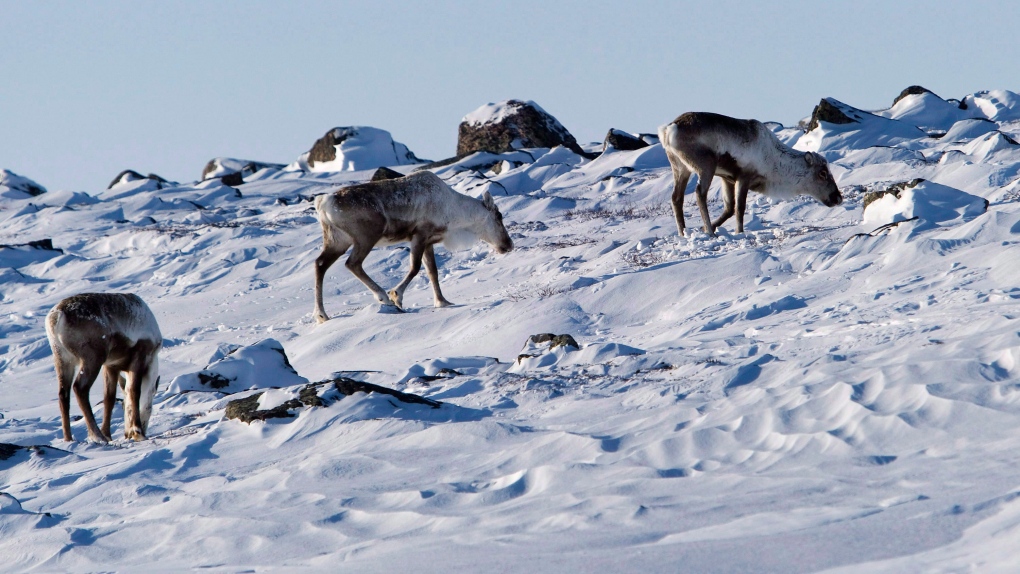 Wild caribou are seen near the Meadowbank Gold Mine in Nunavut on Monday, March 23, 2009. (THE CANADIAN PRESS / Nathan Denette)

YELLOWKNIFE -- Officials in the Northwest Territories say hunters are illegally killing caribou in vulnerable herds along the territory's ice roads.

Earl Evans, chairman of the Beverly and Qamanirjuaq Caribou Management Board, says it's the worst he has seen in his 50 years of hunting and trapping.

The board was created almost 40 years ago to safeguard two herds of barren ground caribou.

"I saw every regulation in the book being violated," Evans said Tuesday.

"Snowmobiles chasing caribou, people shooting into the herds, hunters using the wrong calibre of rifle required to make a clean kill and/or not retrieving their kills, pollution, and outright dangerous hunting."

Easy access to ice roads combined with too few conservation officers to monitor the vast area has made it difficult to control the problem, said Evans, who noted that he went to the area two weeks ago to see the situation for himself after a hunter alerted him.

Evans said there are many hunters in the N.W.T. who follow rules for hunting caribou.

Evans said out of nine caribou herds in the territory, eight are in decline and "some are in serious decline."

Environment Minister Shane Thompson said the N.W.T. government is investigating the illegal killing of more than 50 caribou this winter compared with fewer than 10 last year at this time.

Thompson said many caribou have been found wounded and left to suffer, or killed and left with their meat unharvested.

"Unfortunately, we've already seen a lot of illegal and disrespectful activities by some people hunting in the North Slave region," Thompson said.

"When I talk to elders and leaders, there are real fears that these practices will push us toward a future no one wants to see -- one where caribou aren't there, one where their children won't be able to bring meat home for their children."

In an effort to stop illegal harvesting, the N.W.T. is increasing enforcement along its ice roads and says it will lay charges against anyone breaking the rules.

"We have increased enforcement along the winter road by truck, snowmobile and helicopter," Thompson said.

The government is working with Indigenous organizations and local leaders to support caribou recovery, he added, and is also looking into reports of online illegal meat sales in the territory.

"Even though most are doing the right thing, there are others who are making the wrong choices."

-- By Emma Tranter in Iqaluit, Nunavut

This report by The Canadian Press was first published March 9, 2021.