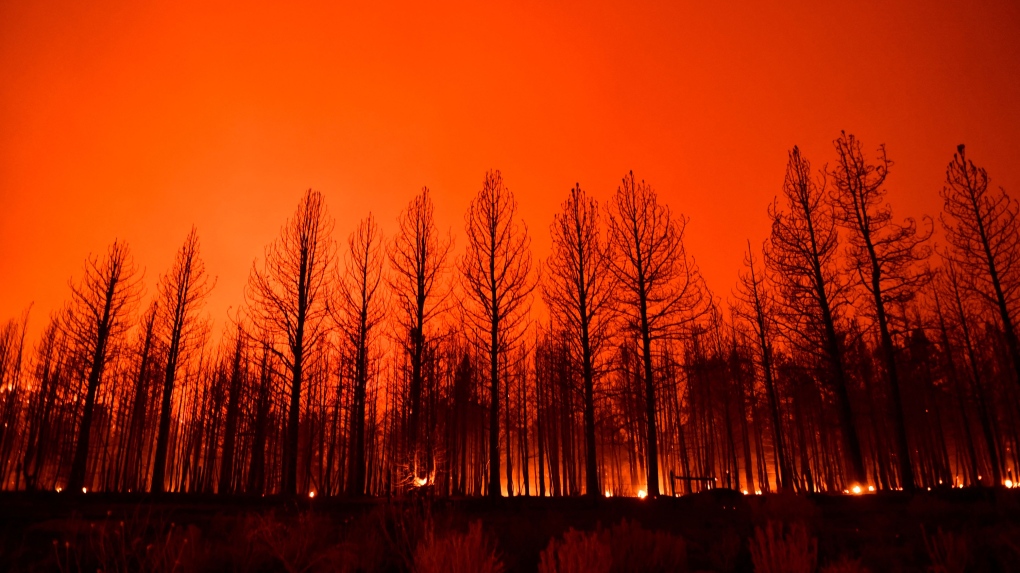 The night sky glowing after trees burned along Highway 395 during the Dixie Fire in the early morning of Aug. 17 near Janesville, California. (Patrick T. Fallon/AFP/Getty Images)

The amount of carbon emitted from severe wildfires that tore across many parts of the Northern Hemisphere this summer broke records, according to data from the European Union's Copernicus Atmosphere Monitoring Service published Tuesday.

Europe experienced its hottest summer on record this year and the Mediterranean also broke temperature records by large margins, as did parts of the Arctic and Canada.

Human-made climate change is making extreme weather events more frequent and intense, and dry conditions and heatwaves in the Mediterranean this year turned the region into a wildfire hotspot, letting off large quantities of smoke pollution.

Meanwhile, wildfires in the Arctic -- a region that has warmed more than twice as fast as the rest of the planet since 2000 -- released 66 million tons of CO2 between June and August, Copernicus said.

The boreal fire season usually lasts from May to October, and activity peaks between July and August.

"Throughout the summer we have been monitoring wildfire activity across the Northern Hemisphere. What stood out as unusual were the number of fires, the size of the areas in which they were burning, their intensity and also their persistence," Mark Parrington, senior scientist and wildfire expert at Copernicus, part of the European Centre for Medium-Range Weather Forecasts, said in a statement.

Wildfires in Sakha Republic in northeastern Siberia have been burning since June and only started receding in late August, with some fires continuing into September, Parrington added.

Meanwhile, parts of Canada, the Pacific Northwest and California have been experiencing large wildfires since the end of June and beginning of July, some of which are still raging.

"It is concerning that drier and hotter regional conditions -- brought about by global warming -- increase the flammability and fire risk of vegetation. This has led to very intense and fast-developing fires," Parrington added.

"While the local weather conditions play a role in the actual fire behavior, climate change is helping provide the ideal environments for wildfires. More fires around the world are anticipated in the coming weeks, too, as the fire season in the Amazon and South America continues to develop."