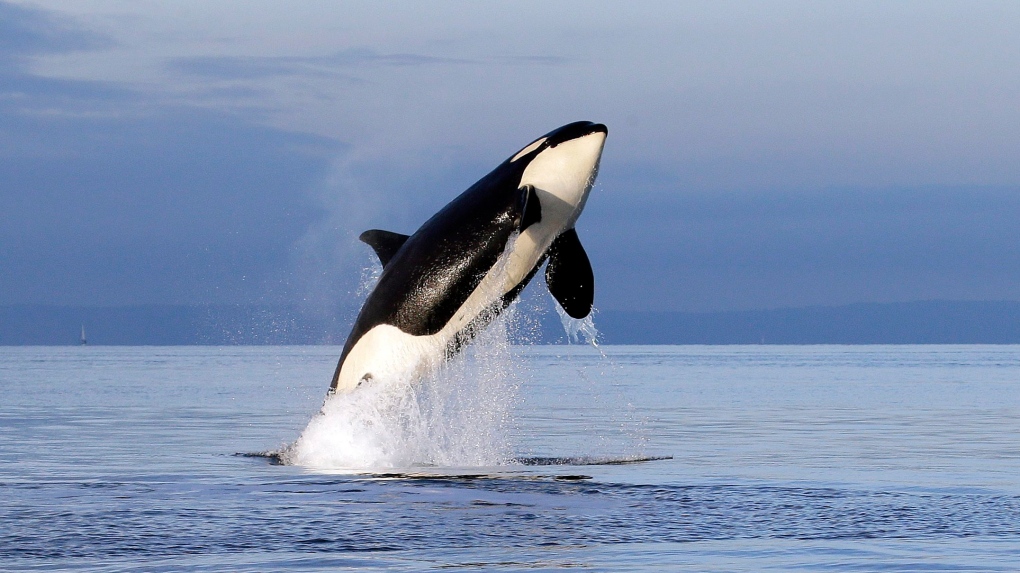 In this Jan. 18, 2014, file photo, an female orca leaps from the water while breaching in the Salish Sea west of Seattle, Wash. (AP Photo/Elaine Thompson, File)

TORONTO -- Melted sea ice in the Arctic Ocean has paved the way for killer whales to spend more time in these waters, but researchers worry that this could threaten species of prey in these areas, potentially throwing the ecosystem off balance.

Researchers from the University of Washington tracked the movement of aquatic species off the western and northern coasts of Alaska using underwater microphones between 2012 and 2019. They presented their findings at a conference held by the Acoustical Society of America on Thursday.

The researchers hadn't initially intended to focus on killer whales, but were surprised when they noticed that more and more orcas were moving into these waters.

“Our work mostly centres on examining the migration patterns of species through the Bering, Chukchi and Beaufort seas, based on acoustic presence or absence," lead author Brynn Kimber said in a news release.

"But when looking for other species, like beluga whales, I noticed more and more killer whales in areas where I didn’t expect them. That was what motivated me to take a closer look at our killer whale detections.”

Killer whales had normally stayed away from these waters to avoid ice entrapment -- which occurs when ice blocks the whales from coming up to the surface to breathe -- but the effects of climate change are causing the sea to be ice-free for longer periods.

“It’s not necessarily that killer whales haven’t been reported in these areas before, but that they appear to be remaining in the area for longer periods of time,” said Kimber. “This is likely in response to a longer open-water season.”

Kimber added that the September sea ice in the Arctic Ocean has declined at an average rate of 13 per cent per decade since the 1980s.

Several species of prey, such as the endangered bowhead whale, have taken advantage of the sea ice to avoid predation by killer whales, but the declining sea ice has offered the orcas a new abundant source of food, which could put these species of prey at risk.