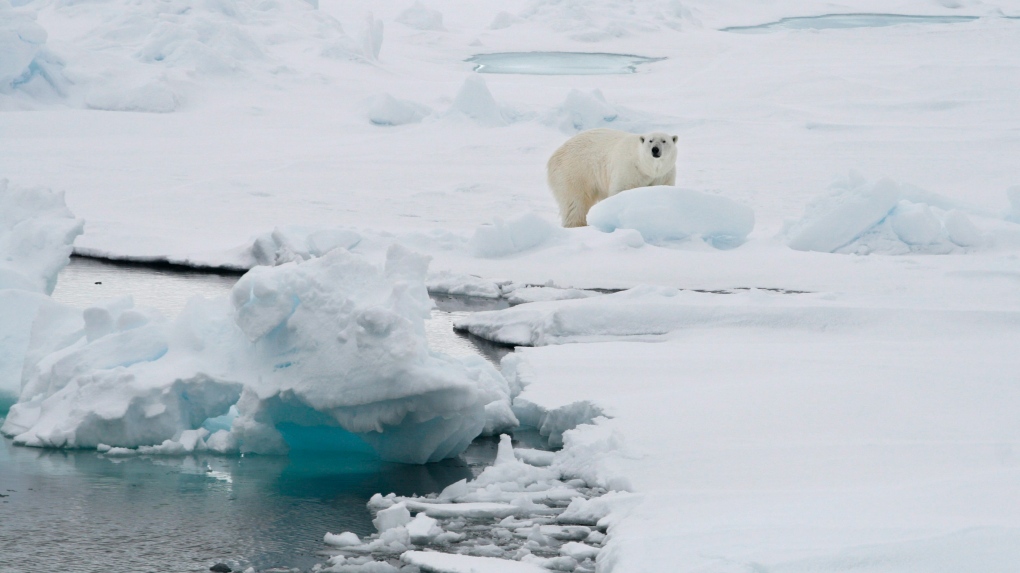 In this Friday June 13, 2008 file photo, a polar bear stands on an ice floe near the Arctic archipelago of Svalbard, Norway. (AP Photo/Romas Dabrukas, File)

TORONTO -- A new study has found high concentrations of toxic "forever chemicals" in the surface of seawater near melting ice floes in the Arctic.

Researchers out of Lancaster University in England found concentrations of poly- and perfluoroalkyl substances (PFAS) up to two times higher in the Arctic's Barents Sea than levels previously observed in that of the North Sea.

Despite the region studied being thousands of kilometres away from populated European cities, the researchers found the PFAS travelled through the atmosphere and accumulated in sea ice, later melting into the Arctic Ocean.

The findings were published online in June and in the July edition of peer-reviewed scientific journal Environmental Science and Technology.

The study noted that these chemicals are considered "forever" because they do not break down in the environment. They used in a variety of household products, food packages and processes including fire proofing, fast food wrappers, non-stick cookware, and even some cosmetics.

Scientists say one particular group of these chemicals -- perfluoroalkyl acids (PFAAs) -- can be toxic to wildlife and humans.

The study, which was jointly funded by the United Kingdom and Germany as part of the Changing Arctic Ocean program, was led by Lancaster PhD student Jack Garnett and environmental chemical professor Crispin Halsall.

According to a press release, Garnett discovered an "unusual phenomenon" during a scientific expedition with the Norwegian Nansen Legacy project where PFAAs present in the atmosphere land on the surface of Arctic ice floes through snowfall and eventually accumulate within the ice.

Looking at the salinity and stable isotopes of snow, ice and seawater, Garnett was able to determine the contribution of PFAAs that came from the atmosphere compared to those already present in ocean waters.

Researchers reported that the PFAAs found in the atmospheric component were "much higher" than those from seawater, confirming that "long range transport and deposition from the atmosphere" are the main source of these chemicals in the Arctic.

The study also found that the presence of brine, also known as highly saline water, in young ice can actually add to the concentration of PFAAs in different layers within the sea ice through climate change.

As the planet warms up, researchers said the cycles of melting and freezing form pockets of highly saline water in Arctic sea ice, trapping the toxic chemicals and then releasing them into the underlying ocean.

Researchers said brine channels on the underside of ice floes typically serve as habitats for those organisms at the bottom of the marine food chain, and warn they will be exposed to high levels of PFAAs as the ice thaws.

Researchers added that these chemicals can then move up the food chain due to their "protein-binding characteristics." They warned that certain types of PFAS are associated with liver damage in mammals, and can also affect fetal development in both humans and other mammals.

Halsall said in the press release that global warming has caused the Arctic Ocean to be "dominated" by one-year ice, formed the previous winter, rather than over many years.

As one-year ice contains more brine, Halsall said this could lead to a "rapid release" of the stored pollutants resulting in high concentrations of PFAS in the waters surrounding ice floes.

To help combat this, the research team is calling for global restrictions on the use of PFAS as well as further research into how chemical exposure impacts those organisms at the base of the marine food chain.

"It is only through this type of investigative science that we can understand the dynamics of pollutant behavior and identify key hazards, particularly those related to climate change," researchers said in the release.