Meet the guy who wants to help save the planet with thousands of buoys, seaweed and giant antacids 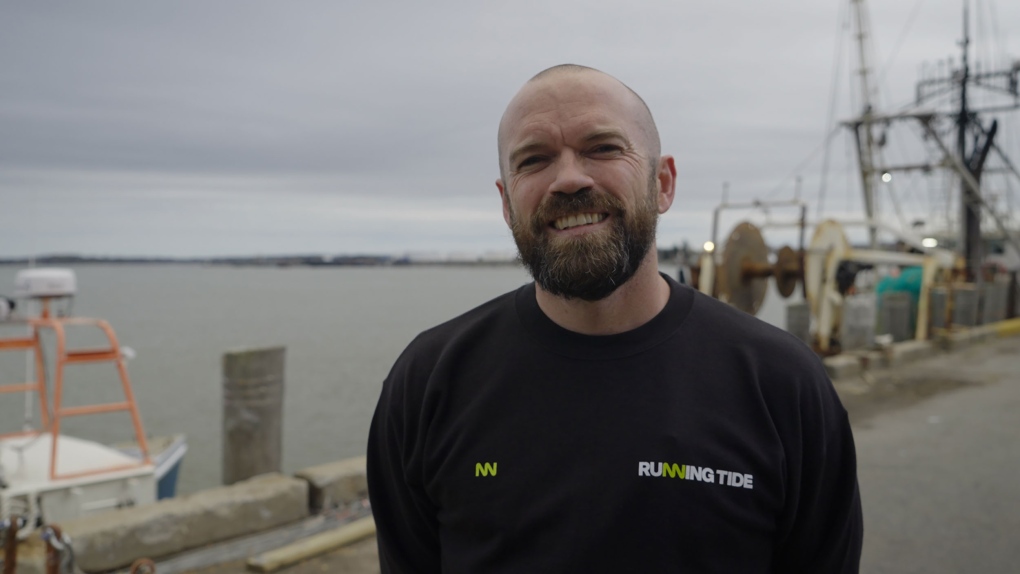 Marty Odlin, the CEO of Running Tide, wants to absorb carbon dioxide from the air and sea with a network of kelp-growing buoys. (Evelio Contreras/CNN)

As a kid growing up on the Gulf of Maine, he'd jump from boat to boat on Portland docks humming with the kind of energy that once hauled hundreds of thousands of pounds of cod into port each day.

Even as he went off to study robotics at Dartmouth College and earth systems at Columbia University, he still dreamed of his own mackerel rig and even had a name picked out -- Running Tide.

But when it came time to take out a boat loan, "I just couldn't make the math work," Marty said. "The climate risks were so high. There just aren't any mackerel. They all swam to Iceland."

Overfishing wiped out the abundance of cod in the 1980s and '90s, until catch limits were eventually reduced by 95%. But while fishing has always been a boom-or-bust game, what keeps Odlin awake is the worry that the booms are over forever. Not just because the water is so warm that they are finding more and more Caribbean trigger fish in lobster traps, but because every ton of fossil fuel burned also makes the sea more acidic.

"The ocean is the is like the womb for fish. All their eggs are external, and those booms come when the chemistry of the ocean is just right for that species," he said. "If it was just overfishing, we would have seen the stocks rebound, and we haven't seen them rebound. And I think that it's pretty clear that that's just due to how drastically we've altered the chemistry of the ocean. And I was like, 'What am I going to do about that?' And you either give up or you get kind of mad, you know?"

Instead of chasing monster mackerel on a boat named Running Tide, Odlin started a company called Running Tide to help solve the problem.

At first it was just Odlin and a friend sitting on buckets and noodling engineering ideas on a white board they found by the road. Now they have billionaire investors and a team of engineers, biologists, agronomists, fabricators, software developers, data specialists and boat captains. Together they're trying to hook a kind of monster -- carbon dioxide.

"It's a Godzilla," Odlin said. "It's burning forests down. It's stealing our fish. It's devastating our crops. It's hurting our farmers. All the stuff that's free and fun is getting ruined. We should get mad and go kill that thing. Right?"

THOUSANDS OF BUOYS AND SEAWEED MICROFORESTS

"Carbon capture and sequestration," or CCS, is hardly the term that rolls off the tongue at dinner parties -- even in the age of increasing unnatural disasters.

But if humanity hopes to maintain a livable planet, science agrees that billions of tons of CO2 must be removed from the air and ocean and locked away, ASAP. This means CCS must grow from an industry worth a few billion in 2022 to a trillion dollars a year by 2030.

The Department of Energy recently announced a US$3.5 billion program to accelerate the development of four direct air capture facilities around the United States -- factory-sized vacuum cleaners, each capable of capturing one million tons of CO2 per year.

But considering the most successful carbon removal facility in the world so far -- Iceland's Climeworks -- can pull down fewer than 4,000 tons annually, it could be decades before that goal is met.

On the private sector side, Canadian e-commerce giant Shopify is among the tech companies pledging to prepurchase $1 billion worth of carbon credits from startups like Running Tide, with the hope that other corporations will follow. And on Earth Day 2021, Tesla CEO Elon Musk announced his $100 million XPRIZE for carbon removal.

Musk said he was out to find the smartest, most cost-effective means and markets to capture carbon. Just over a year later, Running Tide and its fisherman/CEO is among the finalists. While some inventors brought designs for massive chemical or mechanical machines, Odlin hopes to harness and supercharge the natural cycles and design features of the ocean he knows so well. Running Tide may employ a number of engineers with PhDs and patents, but their tentpole technologies are oysters, limestone and seaweed.

The centerpiece idea is a network of thousands of buoys floating in the North Atlantic, each holding a microforest of seaweed and a few pounds of limestone. The seaweed will gobble up carbon from the air and water, and the limestone will serve as an antacid for the surface layer of the sea -- like a Tums for the ocean.

With the shape of a small robot, a buoy's solar panels would power a cloud-connected camera and instruments to monitor kelp growth and water chemistry, a data feed vital for future carbon markets.

When a seaweed crop is cut, it will sink to the deep ocean where all the CO2 those plants absorbed will remain buried in sediment for thousands of years.

The company is also building floating oyster farms, which filter millions of gallons of seawater while growing a marketable source of protein and capturing carbon in the shells at the same time.

A few oysters on a plate or a pile of kelp on the beach can seem like such tiny weapons against a carbon "Godzilla," but Odlin dreams of goosing their natural powers with the latest in biotech and building them to a massive scale on the same Maine docks where his ancestors built ships to beat Hitler.

"We grew up on these stories of heroism and sacrifice. Well, it's time now," Odlin said. "What are we waiting for? All this anxiety, all this frustration that people have, it's just because we haven't been unleashed. I'm such an optimist when it comes to the potential of the of the American spirit. We just have to be unleashed."