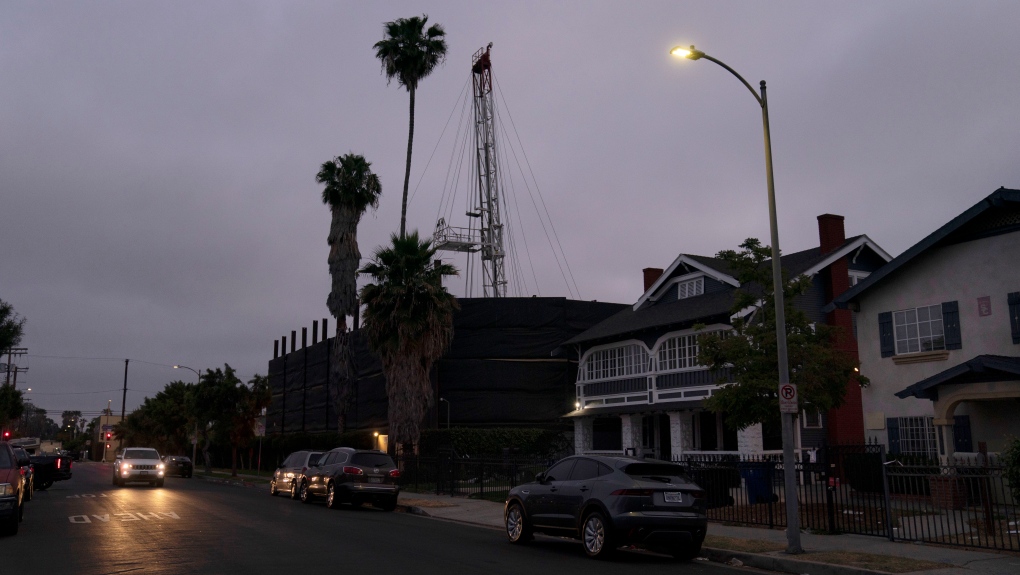 A vehicle drives past the Jefferson oil drill site located in the residential area in Los Angeles, June 2, 2021. The Los Angeles City Council voted on Friday, Dec. 2, 2022, unanimously to ban new oil and gas drill sites and phase out existing ones over the next 20 years on Friday. (AP Photo/Jae C. Hong, File)

The Los Angeles City Council voted unanimously on Friday to ban drilling of new oil and gas wells and phase out existing ones over the next 20 years.

The vote comes after more than a decade of complaints from city residents that pollution drifting from wells was affecting their health.

"Hundreds of thousands of Angelenos have had to raise their kids, go to work, prepare their meals (and) go to neighborhood parks in the shadows of oil and gas production," said Los Angeles City Council president Paul Krekorian, one of the councilmembers who introduced this measure. "The time has come .... when we end oil and gas production in the city of Los Angeles."

Two engineers with Yorke Engineering, a California-based company that does air quality and environmental compliance review, spoke in opposition to the ordinance. They said a ban and phase out will have a negative effect because oil and gas operators will abandon wells. They said this is being underestimated by the city. If they walk away, that will mean increased air pollution and greenhouse gas emissions, they said.

But Los Angeles City Attorney Mike Feuer said these claims are "not credible," citing a review by Impact Sciences, another California-based firm that performed an environmental analysis of the ordinance for the city.

Los Angeles was once a booming oil town. Many of its oilfields are now played out but it still has several productive ones.

According to the city controller's office there were 780 active and 287 idle wells within city boundaries in 2018. An idle well is one that is not operating, but neither has it been permanently sealed, so it could be brought back into production.

Near Long Beach there's the very prolific Wilmington oil field, which yielded more than 10 million barrels of crude oil in 2019, according to state records.

Hundreds of the still active wells in that field are concentrated in Wilmington, a predominantly Latino part of Los Angeles. Several clusters of the active wells, located near homes, ballfields and childcare facilities, are operated by companies like E&B Natural Resources Management Corporation and Warren Resources.

Warren Resources CEO and president James A. Watt said in a statement to The Associated Press that the company has invested US$400 million in its oil and gas operations. "We intend to use all available legal resources to protect our major investment from this unlawful taking," he said.

Some studies look at the possible effects of pollution emanating from the city's existing oil and gas wells.

Researchers from the University of Southern California in a study in 2021 found that people living near wells in two Los Angeles neighbourhoods -- University Park and Jefferson Park -- reported significantly higher rates of wheezing, eye and nose irritation, sore throat and dizziness than neighbours living farther away. Both of those communities are predominantly non-white with large Black and Latino communities, according to the U.S. Census.

The push to ban drilling in the City of Los Angeles is part of a region-wide effort to shut down oil and gas extraction throughout the county of Los Angeles, with similar measures covering Culver City and unincorporated parts of Los Angeles County passed in 2021.

"In Los Angeles, we sit on the largest urban oil deposit in the world," said councilmember Marqueece Harris-Dawson ahead of the vote. "So if Los Angeles can do it, cities around the world can do it."

The Associated Press Health and Science Department receives support from the Howard Hughes Medical Institute's Science and Educational Media Group. The AP is solely responsible for all content.

Justice Minister David Lametti says he will "look at" a federal policy that restricts gay and bisexual men from donating to sperm banks in Canada, after CTV News exclusively reported on Wednesday that a gay man is taking the federal government to court over it.

The federal government is seeking to delay the extension of assisted dying eligibility to people whose sole condition is a mental disorder until March 17, 2024. Justice Minister David Lametti introduced a bill seeking the extension in the House of Commons on Thursday.

Six more weeks of winter? Here are the predictions of groundhogs across North America

Will we see six more weeks of winter, or an early spring? Here’s what some of the groundhogs (and one human) have predicted so far, from coast-to-coast.

'Dances With Wolves' actor appears in court in abuse probe

A former 'Dances With Wolves' actor accused of sexually abusing Indigenous girls and leading a cult must remain held without bail until his next court hearing, a judge ordered Thursday morning.

The United States has answered President Volodymyr Zelenskyy's plea for rockets that can strike deep behind the front lines of the nearly year-long conflict with Russia. Now Russian forces will need to adapt or face potentially catastrophic losses.

Former Wagner commander says he is sorry for fighting in Ukraine

A former commander of Russia's Wagner mercenary group who fled to Norway told Reuters he wanted to apologize for fighting in Ukraine and was speaking out to bring the perpetrators of crimes to justice.

As rates of sexual assault climb across Canada, nursing experts say there is a shortage of specially trained forensic nurses to properly care for victims.