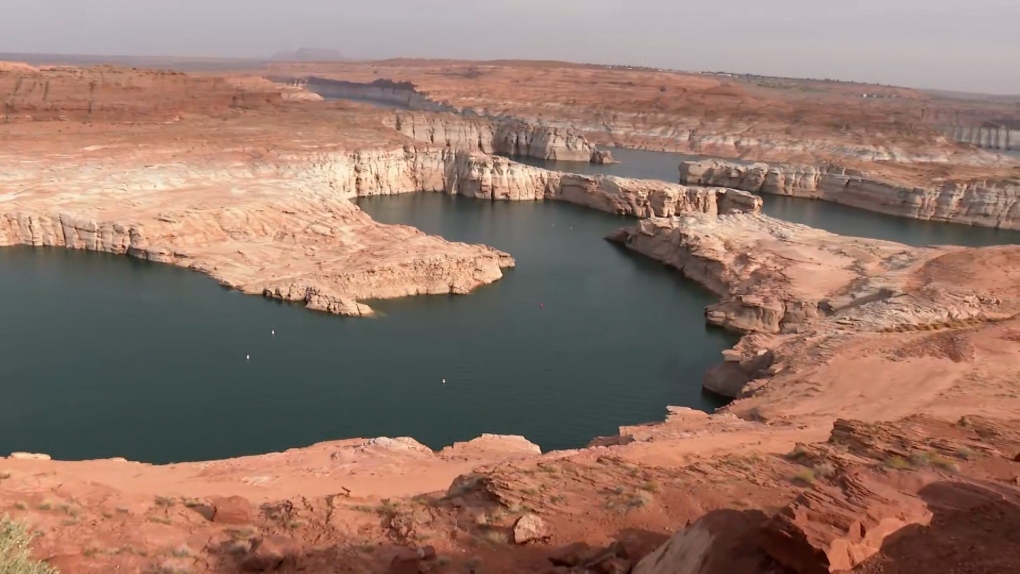 As water levels decline in Lake Powell, so does hydropower production. (CNN)

Lake Powell, the second-largest reservoir in the U.S., is drying up.

The situation is critical: if water levels at the lake were to drop another 32 feet, all hydroelectricity production would be halted at the reservoir's Glen Canyon Dam.

The U.S. West's climate change-induced water crisis is now triggering a potential energy crisis for millions of people in the Southwest who rely on the dam as a power source. Over the past several years, the Glen Canyon Dam has lost about 16 percent of its capacity to generate power. The water levels at Lake Powell have dropped around 100 feet in the last three years.

Bob Martin, deputy power manager for the Glen Canyon Dam, pointed toward what's called the "bathtub ring" on the canyon walls. The miles of white rock represent this region's problem.

"That's where the water has bleached out the rock -- and that's how high the water was at one point," Martin told CNN.

As water levels decline, so does hydropower production. The dam harnesses the gravitational force of the Colorado River's water to generate power for as many as 5.8 million homes and businesses in seven states, including Nevada and New Mexico.

Bryan Hill runs the public power utility in Page, Arizona, where the federal dam is located, and likens the situation to judgment day.

"We're knocking on the door of judgment day -- judgment day being when we don't have any water to give anybody."

Forty percent of Page's power comes from the Glen Canyon Dam. Without it, they'll be forced to make up that electricity with fossil fuels like natural gas, which emits planet-warming gases and will exacerbate the West's water crisis.

Loss of power at the dam would also mean higher energy costs for customers as the price of fossil fuels skyrockets.

"If nothing changes, in other words, if we don't start getting some moisture for Page, in particular, we are looking at an additional 25 to 30 per cent in power costs," Hill told CNN.

Arash Moalemi, the Navajo Tribal Utility Authority's deputy general manager, told CNN a loss of power at the Glen Canyon Dam would be devastating for the Navajo community.

"We have 40 per cent unemployment, and our per capita income is a little over 10 thousand dollars," Moalemi said. "Higher energy prices could mean some people aren't able to heat or cool their homes."

The federal government -- which technically owns the hydropower flowing through federally managed dams -- sells the electricity to states for what is often far less than the commercial market price. In a worst-case scenario, the Interior Department projects the dam could stop producing power by January.

The agency is now weighing an emergency action that would buy the dam more time.

In a letter to seven Western states this month, the Interior Department recommended releasing less water from Lake Powell to downstream states this year. The proposal calls for holding back the equivalent of 42.6 billion gallons of water in Lake Powell, which will mean deeper cuts to the amount of water people can use in Arizona, California, Colorado, Nevada, New Mexico, Utah and Wyoming.

More than 110 billion gallons of water have already been held back so far this year.

This impossible choice comes as new images show that Lake Mead -- Powell's downstream neighbor and the country's largest reservoir -- has dropped to such historically low levels that one of the lake's original 1971 water intake valves is now exposed above the water line.

Inside the Glen Canyon Dam, the current water level is still producing energy.

At the dam's power plant there are eight generators. The force of water traveling through 15-foot diameter pipes hits and spins turbines which then generate power. If water levels at Lake Powell drop just another 32 feet, those generators will stop spinning.

The climate crisis is forcing both federal and state governments to make tough choices and take drastic measures just to keep both power and water flowing to Americans in the Southwest.

The Interior Department is expected to make a final decision on how to handle the dire situation at the dam by early May.