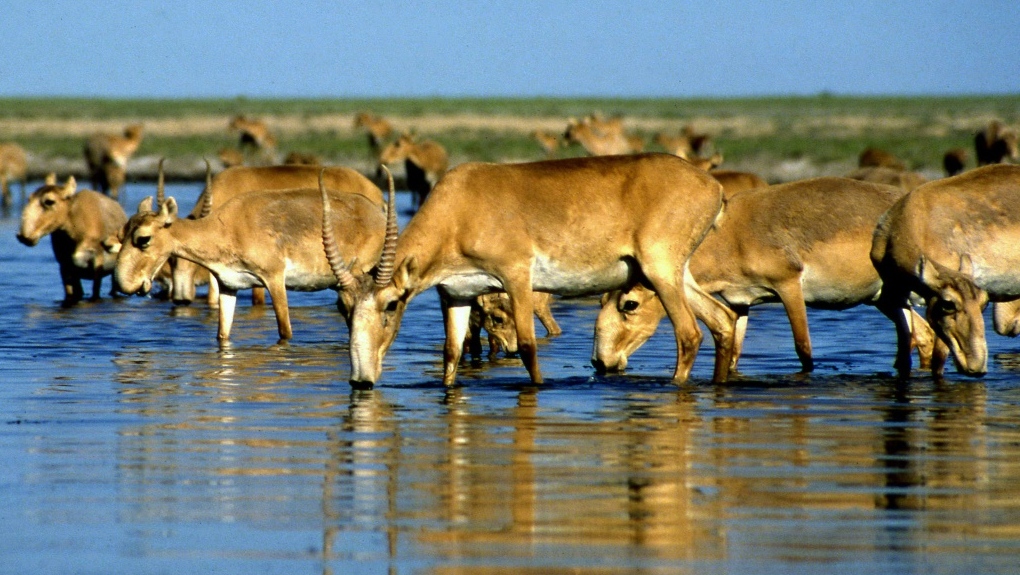 Critically endangered: Saiga antelopes are targeted by poaching, fuelled by demand for the animals' horn in Chinese medicine. (AFP)

ALMATY, KAZAKHSTAN -- Kazakhstan said Friday that around 350 critically endangered Saiga antelopes had been killed, probably by lightning, after villagers found their bodies in steppe land in the west of the country.

The discovery came during calving season for the Saiga, which is known for its distinctive bulbous nose.

The Kazakh ecological ministry said in a statement that lightning was the probable cause of their deaths "as there are traces of lightning strikes on the carcasses."

The International Union for Conservation of Nature (IUCN), whose "Red List" is the scientific reference for threatened wildlife, lists the Saiga as among five critically endangered antelope species, with a population of around 124,000 adults.

Kazakhstan is home to the vast majority of the animals, with Russia's Kalmykia region and Mongolia hosting much smaller populations.

In 2015, around 200,000 of the antelopes -- well over half the total global population at the time -- were wiped out by what scientists later determined was a nasal bacterium that spread in unusually warm and humid conditions.

In an aerial survey in 2019, Kazakhstan said its Saiga population was estimated at more than 330,000 individuals.

Poaching is a persistent threat, fuelled by demand for horn in traditional Chinese medicine. Kazakhstan's leaders pledged to crack down on the crime after two state rangers were killed by poachers in 2019.