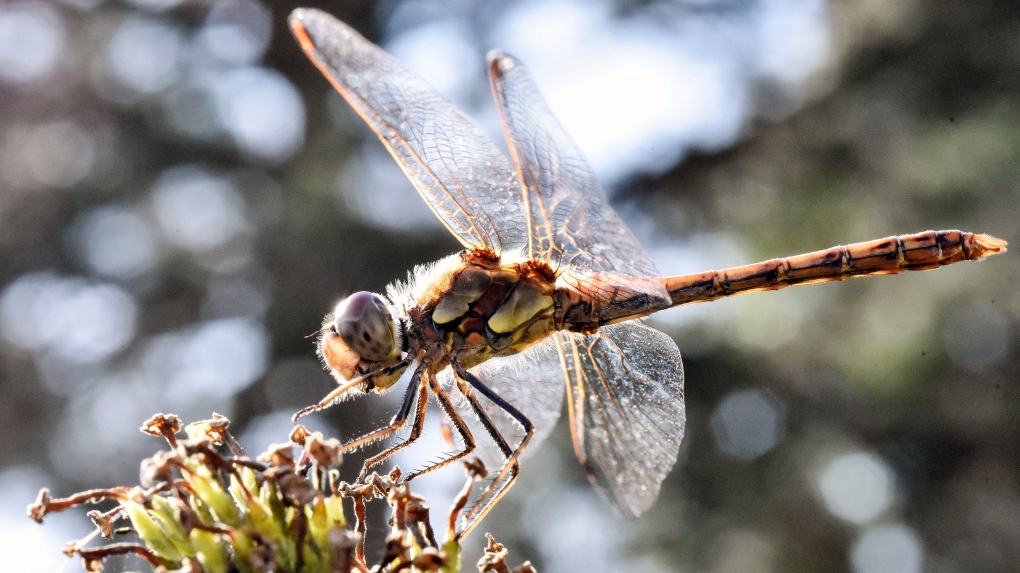 A dragonfly sits on a blossom in the late summer sun in a garden in Gelsenkirchen, Germany, on a warm Sunday Sept. 15, 2019. (AP Photo/Martin Meissner)

TORONTO -- Dragonflies are some of the most resilient insects on the planet. They've been on this planet for more than 200 million years and inhabit every continent except Antarctica.

A report from the British Dragonfly Society released on Tuesday found that since 1970, dragonflies in the U.K. and Ireland have been expanding their range and spreading north.

Around 40 per cent of species have increased their numbers, while 10 per cent have declined. As well, six species of dragonflies that have only existed in continental Europe have colonized the British Isles since 1996.

While similarly comprehensive data is lacking for dragonfly species in North America, experts tell CTVNews.ca that researchers have observed similar trends in Canada and the U.S.

"You tend to see more dragonflies in these really warm environments than you do in cold environments," he told CTVNews.ca on Wednesday.

"In terms of how dragonflies are going to deal with climate change … some of them are going to appear like they're doing better in places like the United States and Canada because there's lots of room for the warm-adapted ones to move up."

Many dragonfly species are what biologists called "generalist" species. That means that these species are well suited to a wide variety of habitat conditions.

"Those are the kind of species that are expanding their ranges," said insect biologist Manpreet Kohli, who is a researcher at the American Museum of Natural History in New York City, during a video call with CTVNews.ca on Wednesday.

As dragonfly species expand their range northward, Kohli says that they could act like invasive species and negatively affect ecological diversity.

"Generalists, a lot of times, can be like invasive species where they are so dominant, that they will not let other species thrive," said Kohli.

But not all dragonfly species may be so lucky. One example of a dragonfly species that could struggle is the Somatochlora sahlbergi, also known as the treeline emerald. This a species adapted to cold climates in Yukon, Alaska, parts of Scandinavia and Russia.

When Kohli and her colleagues went up to Yukon to study this species in 2015, they found that they couldn't find the species in areas where they expected to find them. In addition, Kohli noticed that other species of dragonflies were moving into the treeline emerald's habitat.

"This kind of species could be particularly in danger because of the changing climate, especially if it's being replaced by other competing species that are moving from southern ranges," she said.

Climate change is impacting more than just the geographic distribution of dragonflies. Moore was the lead author of a study published in July that found that warmer temperatures were affecting the colouration of the wings of dragonfly species in North America.

"What our research shows is that there are these really consistent ways that the dragonflies here in the United States and Canada seem to have adapted these wing colourations to attract mates," said Moore

Moore and his colleagues found that dragonflies are losing the black patterns of their wings, which could make it more difficult for these species to attract mates.

"There's all sorts of things that dragonflies have managed to adapt through their long history," said Moore.

"The fact that you know that we might be imperiling some of these dragonflies now, that's pretty scary for the rest of us. We don't know how adaptable we are compared to an organism that's been around for 200 million years."​