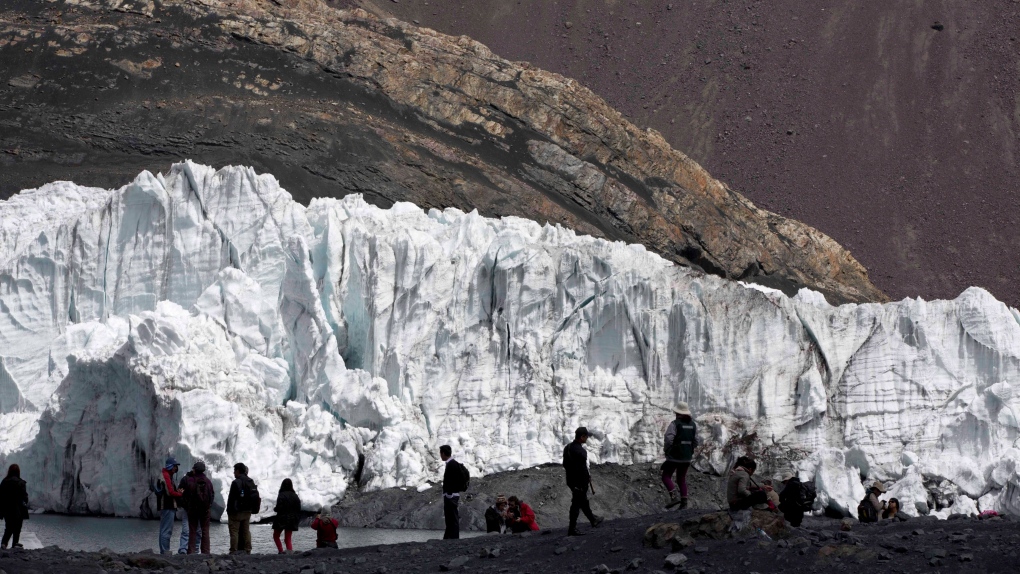 In this Aug. 12, 2016 photo, a group of tourists walk in front of the Pastoruri glacier in a tour called "The Route of Climate Change" in Huaraz, Peru. (AP Photo/Martin Mejia)

New research has found that climate change could cause more than 100,000 tonnes of micro-organisms to be released into natural ecosystems every year, a result of melting glaciers in the Northern Hemisphere.

A team of researchers with Aarhus University has analyzed meltwaters from eight glaciers across Europe and North America and two sites in western Greenland, concluding that one millilitre of glacier meltwater contains approximately 10,000 micro-organisms -- mostly consisting of algae, bacteria, viruses, and fungi.

The environmental ramifications of these micro-organisms spreading into global waters remain uncertain.

"Much of the carbon released from the melting glaciers will end up in the rivers supplied by the glaciers, or in the sea,” Ian Stevens, a researcher with the Department of Environmental Science at Aarhus University, said in a news release. “However, we do not yet know whether the microorganisms can be harmful or beneficial, or what consequences the changes in the carbon supply could have for agriculture using the water from glaciers.”

The study also suggested a scenario where up to 0.65 million tonnes of carbon could be released from glaciers in the Northern Hemisphere every year, based on an average temperature increase of around 2.7 C in 2100.

Scientists from Aberystwyth University, in Wales, have also warned that 100,000 tonnes of microbes – noting both harmful and beneficial ones – could also spread throughout downstream ecosystems as glaciers continue to melt.

“Over the coming decades, the forecast 'peak water' from Earth's mountain glaciers means we need to improve our understanding of the state and fate of ecosystems on the surface of glaciers,” he added.

“With a better grasp of that picture, we could better predict the effects of climate change on glacial surfaces and catchment biogeochemistry.”

According to the United States Geological Survey (USGS), countless aquatic species require glacier meltwater to survive. This includes aquatic insects that are “fundamental components” of the food web. Changes in stream habitat, USGS warns, may adversely impact aquatic life in ways that affect food supplies on a global scale.