Potential fuel sources of wildfires could have been burned away if both federal and provincial governments had greatly expanded the millennia-old practice of purposefully burning away entire patches of trees and dry vegetation, fire researchers and First Nations leaders told CTVNews.ca.

Without these gaps in the forestry, wildfires have moved “like a conveyor belt” through the province, said Brenden Mercer, forest field management liaison for the First Nations’ Emergency Services Society of British Columbia (FNESS) – a group which, among other duties, assists First Nations communities perform cultural burns.

“In my opinion, prescribed burning can help alleviate a lot of this stuff because, since time immemorial, First Nations have been burning like this,” said the former firefighter with ancestry from Little Grand Rapids First Nation in Manitoba.

These controlled, low-intensity burns can be either burns specifically designed to remove sources of fire fuel loads, or cultural burns which are sacred Indigenous practices performed for a host of reasons including ecological stewardship, rejigging the soil for new vegetation, or creating new grazing paths for animals.

While fire experts’ research have confirmed the long-term benefits to Indigenous burnings, Mercer said the legacy of colonialism prevents more of the burnings from taking place.

“Things like the Brush Fire Act put into place in the [1870s] said basically that First Nations couldn't apply fire to the landscape anymore,” he said.

Laws like the Brush Fire Act -- first enacted in B.C. in 1874 and followed suit by other provinces in the early 1900s -- purported to prevent wildfires sparked by locomotives. But historians said they effectively banned ceremonies, like burnings, and sought to assimilate Indigenous Peoples.

But there has been some progress to undo this.

Natural Resources Canada for example, acknowledges prescribed fires’ ability to reduce the number of wildfires. And following the wildfires in B.C. four years ago, a government report released in 2018 by former B.C. cabinet minister George Abbott and Chief Maureen Chapman urged B.C. to work with First Nations communities to “increase the use of traditional and prescribed burning."

In 2019, members of the Shackan Indian Band in B.C. partnered with the FNESS to perform a cultural burn with the assistance of the B.C. Wildfire Service. But band leaders like Chief Arnold Lampreau said efforts like this are “not nearly enough.”

He said in the past decade, he and his cousin have been told by government workers to put out cultural burns on their land several times.

“The threat has kind of dampened his willingness to go out there and burn,” he told CTVNews.ca in a phone interview, noting this feeling is, unfortunately, the case for many.

Even in the past few days, he’s grown angry as advice he’s given to government forestry workers “have gone unheard.”

“Colonialism and disregard of our knowledge have now created this catastrophe.”

The same year that 2018 government report was released, University of British Columbia fire ecologists found released a report that impediments to progress to better wildfire prevention included a lack of sustained funding from provincial and federal governments, high costs and complex paperwork.

In a statement issued to CTVNews.ca on Monday, a B.C. government spokesperson said the Ministry of Forests, Lands and Natural Resource Operations, “recognizes the importance of working with Indigenous partners to bring cultural fire back to the landscape.”

“We currently support traditional and cultural burning and have assisted many First Nations across the province in this practice," read the statement.

The spokesperson said their several draft action plans, including the Declaration on the Rights of Indigenous Peoples Act, show the government’s commitment. They also pointed to funds for various parties, including First Nations, which can be used to “complete wildfire risk reduction activities” on private land.

The government stated that before any burn is approved, factors such as vegetation type, terrain, humidity, or wind conditions must all be considered, and that to reduce smoke, all prescribed burns must also comply with the Environmental Management Act and the Open Burning Smoke Control Regulation.

But fire research scientist Amy Cardinal Christianson said the approval process can be too rigorous and takes too long. A government-affiliated website states prescribed burns can take many months or even years to plan.

She adds that far too few Indigenous leaders are brought to the table during non-crisis times, which could help undo decades of colonialism and result in more controlled burnings.

“There was a real devaluation of Indigenous knowledge,” said Cardinal Christianson, a Métis researcher from Treaty 8 territory, who urged government or non-Indigenous communities to reassess their long held beliefs that controlled burning is harmful.

Today, Indigenous Peoples can have cultural burns on reserves and on title lands without provincial approvals. But she pointed out that for smaller reserves, challenges arise when they don’t have jurisdiction to burn surrounding lands, even though it’s on their territories. 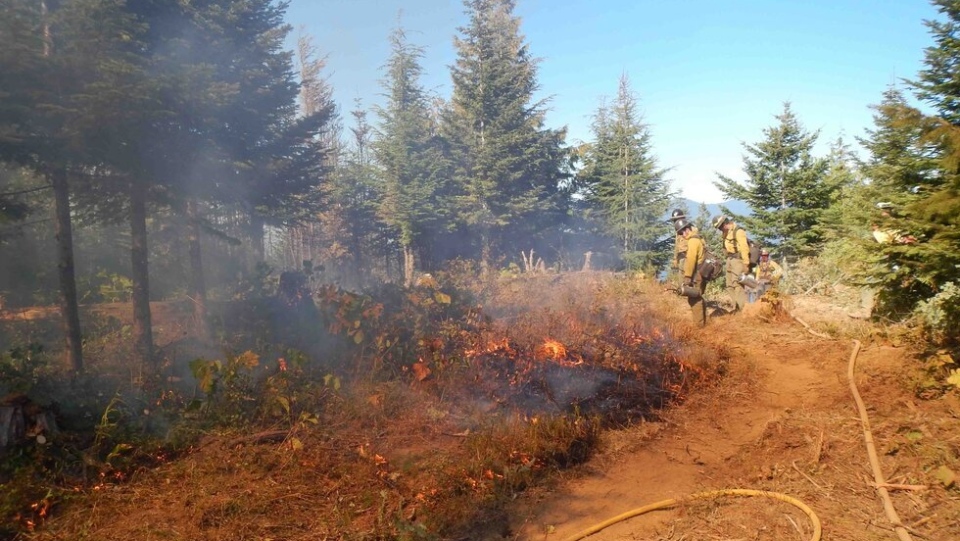 Further complicating the issue is the fact that wildfire agencies ask people to report in any signs of smoke they see.

When the smoke is from band members performing cultural burns, first responders can either let the burn continue or offer to help. But Cardinal Christianson notes sometimes they’ll demand members extinguish it and this can create conflict when communities feel they shouldn’t have to report what they’re doing on their territory.

Cardinal Christianson reaffirmed First Nations communities know their land the best: they know the best times to burn, which areas have too much fuel load; and how to use the terrain to their benefit.

The Bridge River Indian Band in B.C., for example, controls fires by burning along the receding snowline on a mountain in the spring, she said. They’ll also burn logs along the riverbank to keep waterways open for fishes; and use the smoke to cool down the valley which can help fish farming.

Cardinal Christianson stresses that “Indigenous knowledge is really highly adaptable” and Indigenous leaders are very cognizant to changes in the landscape. But they need to be actual equal partners with the government.

Even if complete 180 degree change happened today, people wouldn’t see a reduction to number of wildfires until controlled burns were the norm over many years, the Nlaka'pamux and Secwepemc traditional burning knowledge keeper said.

“Fire keepers say fire is good and it has to be used to bring back the health and the balance to the forest,” Gilchrist said, explaining prescribed or cultural burns are most safely done during the spring or fall when the ground is moist.

But if this isn’t done, Gilchrist said when a wildfire comes along, there’s not much that can do besides simply try and put it out.

He said higher fuel loads and harsher wildfires are the direct result of more a century of “Indigenous knowledge being snuffed out.”