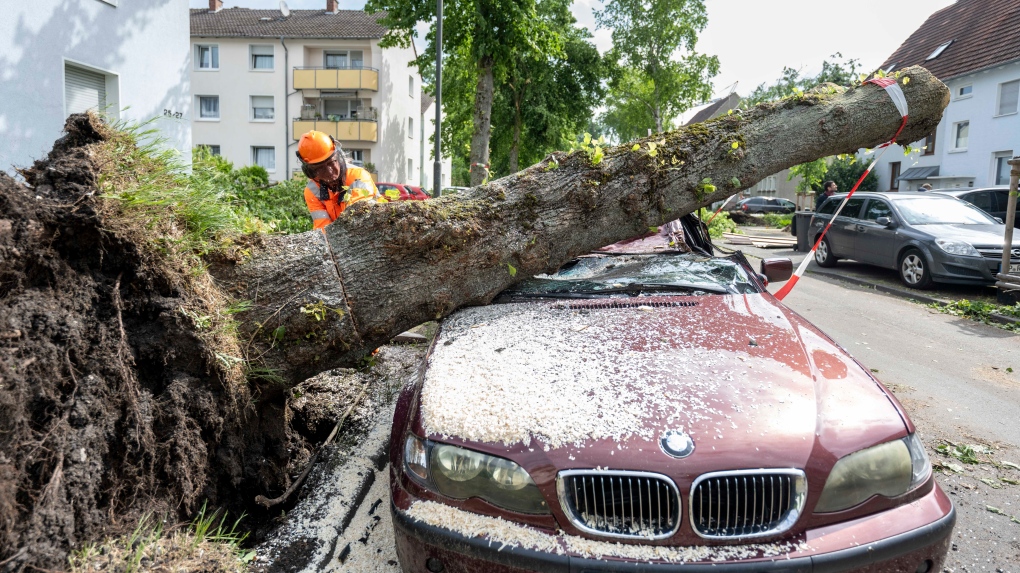 A worker removes a fallen free that fell on a car in Lippstadt, Germany, a day after heavy rains and a tornado hit the area, Saturday, May 21, 2022. (David Inderlied/dpa via AP)
BERLIN -

A storm that swept across parts of Germany generated three tornadoes, the country's weather service said Saturday. One of them left a trail of destruction and more than 40 people injured in a western city.

Meteorologists had warned of heavy rainfall, hail and strong gusts of wind in western and central Germany on Friday, and people in the western state of North Rhine-Westphalia were advised to stay home. Storms on Thursday had already disrupted traffic, uprooted trees that toppled onto rail tracks and roads, and flooded hundreds of basements in western Germany.

The German Weather Service confirmed three tornadoes in North Rhine-Westphalia -- in Paderborn, in nearby Lippstadt, and on the edge of the town of Hoexter, news agency dpa reported.

Forty-three people were injured in Paderborn as the tornado tore across the city's downtown area on Friday afternoon, 13 of them seriously, Mayor Michael Dreier said.

Trees in a park and stop lights "snapped like matches," roofs were ripped off buildings and windows smashed, he told reporters on Saturday, and the storm left a roughly 300 metre (yard) -wide trail of destruction. A tree hit the windshield of a fire truck, but the occupants weren't hurt.

Police urged people to stay home or stay out of the city on Saturday so as not to get in the way of recovery work. They said they still expected possible risks from high wind.

Further south, authorities in Bavaria said 14 people were injured Friday when the wooden hut they were trying to shelter in collapsed during a storm at Lake Brombach, south of Nuremberg.

Elsewhere in Europe, Spain was sweltering Saturday under unusually high temperatures for late spring, with a mass of hot, dry air carrying dust from North Africa.

At least 13 regions were on alert Saturday due to heat, Spain's State Meteorological Agency AEMET said, and the temperatures could provoke storms in five of them. The "unusual and extreme" temperatures are expected to peak Saturday.

A Russian airstrike on residential areas killed at least 21 people early Friday near the Ukrainian port of Odesa, authorities reported, a day after the withdrawal of Moscow's forces from an island in the Black Sea had seemed to ease the threat to the city.

The World Health Organization's Europe chief warned Friday that monkeypox cases in the region have tripled in the last two weeks and urged countries to do more to ensure the previously rare disease does not become entrenched on the continent.