Fraser Island, a unique Australian ecosystem, is on fire 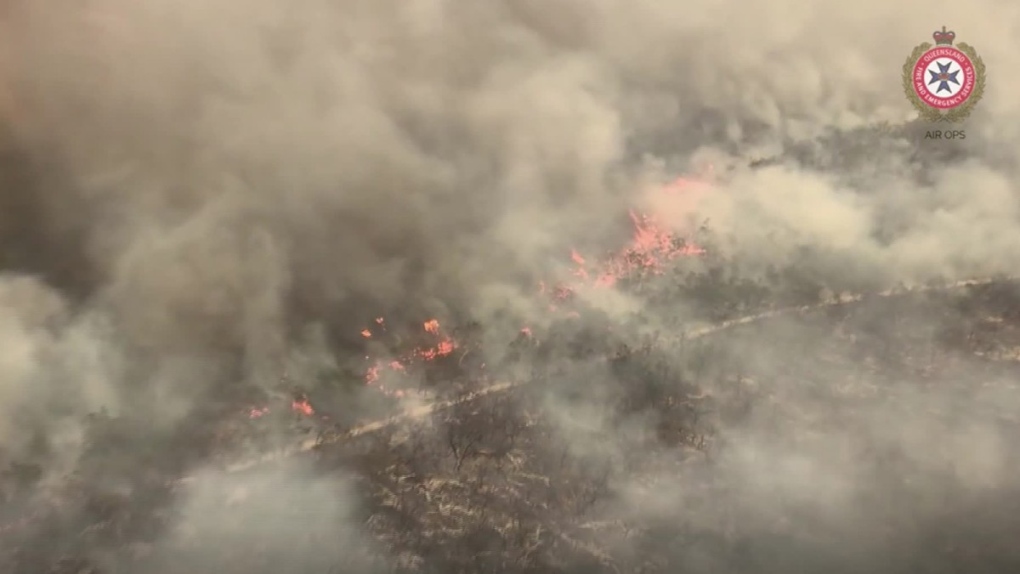 Smoke from the bushfire on Australia's Fraser Island in Queensland. (Credit: Queensland Fire and Emergency services via CNN)

Firefighters in Australia are battling a massive bushfire that has been burning out of control for six weeks across the popular tourist spot of Fraser Island, as parts of the country's east swelter through a record-breaking heat wave following the hottest November on record.

Tourists and staff on the UNESCO World Heritage site have been forced to evacuate as the fire closes in on local attractions and the island's unique forests are smothered in smoke.

On Tuesday morning local time, fire and emergency services in the eastern state of Queensland issued a "prepare to leave" warning for the Kingfisher Bay Resort and Village on the island, as blazes in several locations threatened the area.

Emergency crews used water bombs to slow the blaze, but the fire service warned conditions could get worse.

"Fire crews are working to contain the fire but firefighters may not be able to protect every property. You should not expect a firefighter at your door," the directive said.

Queensland's Bureau of Meteorology said the fire danger is likely to be exacerbated by strong winds and extreme heat wave conditions, which are forecast to continue in the state for the next few days.

The blaze on Fraser Island was sparked by an illegal campfire. In six weeks it has torn through 76,000 hectares (187,800 acres) of bone-dry bush land, according to CNN affiliate Nine News.

Also known by its Indigenous name K'gari, the island was listed as a UNESCO World Heritage site in 1992 for its unique forests and natural beauty. It's the world's largest sand island and has the only tall rainforest that grows on sand.

But the makeup of the sand island was making work difficult for the more than 30 crews fighting the blaze on the island, the Queensland fire service said.

Incident controller James Haig said in a video message posted to Twitter that "conditions are very challenging" but firefighters were doing their "absolute best" to try and mitigate the damage caused by a fire this large.

Crews are also battling fires in dozens of other areas of mainland Queensland and New South Wales.

RECORD HEAT COULD SET UP ANOTHER DEVASTATING BUSHFIRE SEASON

It comes as parts of eastern Australia swelter through a spring heat wave, with temperatures climbing to above 40 degrees Celsius (104 degrees Fahrenheit) in Sydney on Saturday. Meanwhile swathes of western New South Wales, South Australia and northern Victoria baked through even higher temperatures nearing 45°C (113°F).

Sydney experienced the hottest November night on record on Saturday, with a minimum overnight temperature of 25.3°C (77.54°F), followed by a second straight day of more than 40°C (104°F) weather on Sunday.

The Bureau of Meteorology on Tuesday said this season's spring was the warmest on record for Australia, and the hottest November.

Bushfires are common across Australia, but conditions have been growing more dangerous in recent years. Australia has been getting hotter and drier for decades, and there's been a long-term decline in southern Australia's rainfall.

Last year was Australia's hottest on record, with the seven years from 2013 to 2019 all ranking in the nine warmest years.

The New South Wales Bushfire Inquiry found in March that the record-breaking fire season was made worse by climate change and warned that such devastating wildfires are likely to happen again. The report found that extreme dryness in forested regions; large amounts of fuel load, such as leaf litter; and dry, hot weather spurred the fires, which spread quickly over large areas.

The Australian Bureau of Meteorology and CSIRO's State of the Climate 2020 report, released last month, said that climate change is influencing the frequency and severity of these dangerous bushfire conditions in the country by affecting temperature, relative humidity and associated changes to the fuel moisture content. In the future, Australia can expect an increase in the number of dangerous fire weather days and a longer fire season for southern and eastern Australia, the report said.

"The Bureau of Meteorology and others have predicted another extremely dangerous fire season on the east coast and also in southwestern Australia," said Bill Hare, director of climate science and policy institute Climate Analytics, on Tuesday.

"If that explodes again, it's going to be very damaging economically and also psychologically. I think people are scarcely recovering from the bushfires last year and early this year. So when you're looking at these regions now, you can see the damage has not been undone."